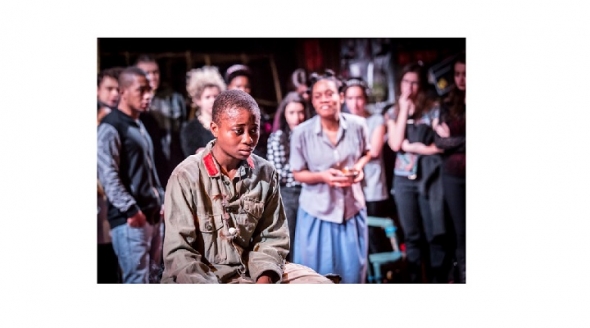 ACV has just been to the theatre to see a powerful new play, “Liberian Girl” at the Royal Court Upstairs that deals with the subject of violence on women in war.

It is set in 1992 during the time of the First Civil War in Liberia (1989-1997) and presented as an immersive theatre experience.

This means that the entire auditorium is a stage and the audience has to walk around or stand in the spaces while the actors perform and or move around them.

It makes you feel you are experiencing the ‘war’ and ‘emotions’ of the central protagonist, 14 year old, Martha (Juma Sharkah), at first hand. The setting completely captures what it’s like to survive in such a harsh and brutal environment.

Written by the first time writer, Diana Nneka Atuona (who was part of the Royal Court writing workshops and winner of the 2013 Alfred Fagon Award for ‘Best New Play of the Year), “Liberian Girl” was the subject of a reading at the Global Summit to End Sexual Violence in Conflict held at the Excel in 10-13 June 2014 http://www.gov.uk/government/topical-events/sexual-violence-in-conflict chaired by William Hague and Angelina Jolie (Special UN Envoy). Atuona is an impressive writer who did a lot of research to get under the skin of how children fared in War.

Liberia, has had two Civil Wars (the second was 1999-2003) and figures say that over 200,000 people were killed, while a million were displaced into refugee camps, and over 15,000 children recruited into ‘Small Boys Units’.

“Liberian Girl” sees the life of the young teenage Martha turned upside down when rebel soldiers begin advancing towards their village. Together with her granny, Mamie Esther (Cecilia Noble) they set off for the capital, Monrovia, hoping to find sanctuary.

She is disguised as a boy, and en route they are stopped by rebel soldiers. Here begins a battle to survive and on the stage we have eight fine actors, conveying the horror and brutality of war, with Martha all the time have to hide the fact that she is a ‘girl’, because if the truth were to come out – the consequences would be horrific – multiple rape and possible death.

The actors are completely convincing and being so close to the ‘action’ is a distinctly uncomfortable experience.

Apart from the actors working to portray believable characters, they also have to pay attention to how they ‘sound’ and a lot of work goes into ensuring that actors can ‘sound’ the part as well as ‘look’ the part.

For, Liberian Girl, it has been the job of dialect coach, Zabarjad Salam to work with the actors to give ‘authenticity’ and ‘realism’. A trained actor, she argues that it is as important for the actor to ‘sound as truthful as possible,’ when portraying a character from a different ethnicity or heritage, as it is to be the part. (Full interview here)

It’s a powerful visceral illustration of the impact of war on women.