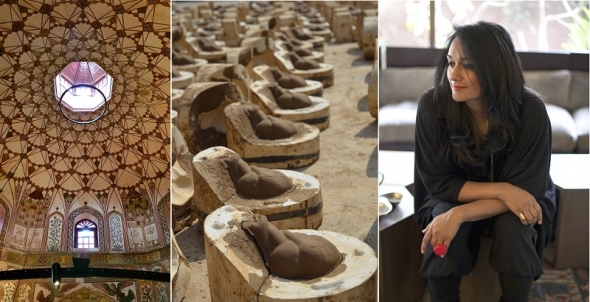 ONE OF THE great centres of Asian learning and culture is another boost by hosting its first ever major artistic exhibition as part of a new multi-national initiative, the Lahore Biennale (March 18-31).
The event is part of the New North and South network, which began last year and compromised a major exhibition of South Asian artists’ work, in Manchester, and then, Leeds.
In all, eight cities are involved in their initiative, which will broadly see an exchange of artists and their art between cities in the North of England (Manchester, Leeds and Liverpool) and South Asia. Artist exchanges are also taking place in Colombo, Dhaka, Lahore, Karachi and Kochi.
Now the focus has switched to Lahore, already a great centre of learning and culture – which also has a thriving and flourishing artistic scene.
Qudsia Rahman (pictured top right*), director of the Lahore Biennale took time out just before the exhibition opened officially on Sunday (March 18) to talk to www.asianculturevulture.com about the art and artists whose work would be presented in the city’s very first, Lahore Biennale (LB01).

www.asianculturevulture.com: How does it feel to be hosting the first ever Lahore Biennale and what benefits will it bring the city, both its artists and inhabitants?

Qudsia Rahman (QR): Of course we are beyond excited to be hosting the inaugural biennale in Lahore, which is really the cultural capital of the country. With its numerous educational and cultural institutions, Lahore has produced some of the most internationally acclaimed artists of the region. However, what is often lacking in Lahore is that local artists rarely have the opportunity to view and engage with the works of their counterparts from the city, the nation, and the region in public settings.
Our biennale aims to do just that at a larger scale, as well as to extend this engagement to more diverse publics within the city, and regionally.

ACV: What was the criteria used to guide the selection?

QR: The selection of artists and projects have a regional focus – so we picked projects that have relevance to a South Asian public and context, also keeping in mind Lahore’s specific circumstances. While the biennale will feature some emerging artists, the majority of artists are those who have engaged with their practice in an extended manner. The first biennale in Lahore needs to showcase these more developed practices together, as at present there is no contemporary art museum in the country where emerging artists can see this work together.

Shahi Hammam, one of the sites for LB01 by Raza Ali Dada

ACV: What do you feel Lahore as a city has to offer artists and is it important to have cultural exchanges with other countries including the West and do initiatives such as this to foster and encourage artistic creation at home in Lahore?

QR: Lahore is home to major art institutions such as the National College of Arts (NCA) that dates back to the 19th century. At NCA and elsewhere art students from all over the country come to train in Lahore. By showcasing work on a sustained basis, such as at LB01, one of our aims is to create this exposure for audiences from all over the country.
The Lahore Biennale Foundation is a member of The New North and South network (UK) that aims to “connect with diverse audiences on both continents through a programme of exhibitions and events that showcase the best of contemporary art from Bangladesh, India, Pakistan, Sri Lanka and the UK.”
We are exhibiting the work of several artists with ties to the UK, these include David Alesworth, Alia Syed, Naiza Khan and Shezad Dawood.

ACV: Is there an overarching vision for the future and how do you see Lahore Biennale developing?

Lahore Museum, another site for LB01 by Iftikhar Dadi

QR: Our vision for the biennale is a decentered one – meaning that instead of curatorial authority being divested solely in one person, we have chosen to work through collaboration.
For this reason, the biennale has engaged multiple curatorial voices, and has a dedicated academic advisor and a dedicated publications advisor. Working with the advisors of the Lahore Biennale Foundation, our team has developed a program in which the city of Lahore emerges as a point of complex focus, and as a node of exchange between the region, and the rest of the world. Keeping in line with the very active public arts mandate of the Lahore Biennale Foundation, segments and projects within LB01 have been developed with the city’s various organisations, institutions, and individuals, harnessing various public resources and being shaped by them.

Among those showing in Lahore after Manchester now are Mehreen Murtaza, whose ‘How will you conduct yourself in the company of trees’ was a major visual and soundscape feature at Manchester Art Gallery, Risham Syed and Waqas Khan emblematic, neon-lit, ‘Khushamdeed’ (welcome in urdu) stood for more than simply a greeting.
In October, both Murtaza and Khan spoke to www.asianculturevulture.com about their work on display at Manchester Art Gallery.

The @LahoreBiennale #LB01 is under way (till March 31) Q&A with dir Qudsia Rahman coming – one of the artists showing there now is @MehreenMurtaza who displayed this @mcrartgallery October
Esp tickled by idea of #speakingtrees 😉#howwillyouconductyourselfinthecompanyoftrees pic.twitter.com/fFy73fuauE