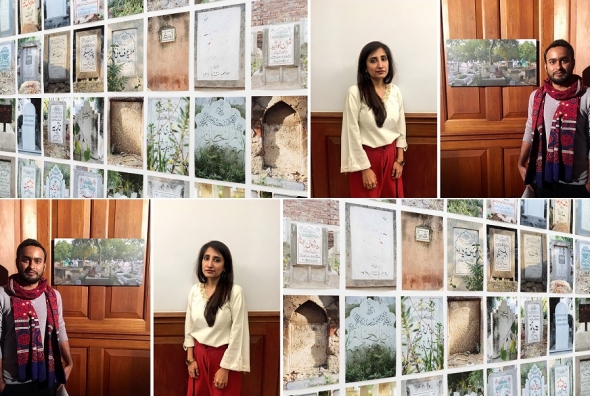 Silent souls: Graveyards and Libraries in Pakistan speak through artists’ pictures as collaboration between art institutions and museums in north of England and art bodies in South Asia showcase the latest work from artists there…

TWO new exhibitions by two photographers, showing solo for the first time in this country, present unique insights into the worlds of Pakistan’s graveyards and libraries.

Part of the #NewNorthSouth art initiative launched last year, The Tetley in Leeds, takes up where four galleries and institutions in Manchester left off in October. ACV covered the first wave of artists showing in this major new art collaboration between the North of England and art exhibitors and artists themselves working in South Asia.

This month the platform for #NewNorthSouth moves to The Tetley, a former brewery, which four years ago was transformed into a unique art gallery space.

A vast art-deco building, some of its original features have stayed intact but while the ground floor has been transformed into a popular bar and restaurant, upstairs you’ll find a gallery which is currently home to two exhibitions by emerging Pakistani multi-media artists – Mahbub Jokhio – ‘In The City of Lost Times’, a photography exhibition focusing on graveyards in Pakistan and Madiha Aijaz ‘These Silences Are All The Words’, exploring libraries in Karachi, comprising film and photographs.

Both artists have chosen to reflect on public places that have very distinct social behaviours attached to them; Mahbub challenges the idea that graveyards are silent, eerie places, infrequently visited and through his work attempts to turn them into social spaces where people meet up and even have celebrations, while in Madiha’s study of public libraries, she takes the silence and solitude of the space and uses sight and sound to tell stories.

ACV caught up with both artists on the opening night in Leeds February 8, where they explained more about the theme of their work.

Both are site-specific pieces, curated for the rooms that house them, which for Mahbub was a challenge that turned into a gift.

Mahbub, 25, teaches at the National College of Arts in Lahore and has previously shown his work at the Liverpool Biennale and completed a residency at Gasworks in London but ‘In The City of Lost Time’ is his first solo show.

It comprises two very distinct sections. The first is staged photography showing his vision of what a graveyard could be, depicting men playing chess while sitting on a grave, a gravestone being used as a bed, a children’s party held in a cemetery and a lone woman stitching on her portable sewing machine. They are all a contrast from how graves are perceived and used in Pakistan.

Mahbub explained: “Graveyards are considered to be scary places, abandoned and quiet.

“But just because they are quiet it shouldn’t put you off visiting them.

“My work reflects on life and death. I view death as a conversion from one state to another, the afterlife and that’s what I wanted to get across in the photograph of the lady with a sewing machine. She is sewing a white cloth joining life and the afterlife together.”

While this image has a philosophical theme, others are much more about simply showing graves as you least expect them and taking the photographs was just as surprising an experience as the outcome.

Mahbub recalled: “When we took the photo of the chess players, we got chased away from the site. After that we took the rest in a graveyard in the Sindh region of Pakistan where people are less conservative.

Mahbub’s second installation is a striking sight. Positioned in the galleries most prominent position, it consists of 99 photographs of female graves. Mahbub considered them to be their final portrait.

He said: ‘The graves range from a six-month year old baby to a woman in her 70s and few have their name on. They are usually referred to simply as mother or ‘wife of’, but there may also be details such as their address and time of death allowing you to paint a portrait in your mind of what their life may have been.”

The exhibition is the second one in which Mahbub has explored graveyards and he admits he’s not done with them yet.

Madiha Aijaz’s ‘These Silences Are All The Words’ is also set in a quiet public space only this time in libraries.

There is a dark aesthetic to her work with images and videos positioned inside dark rooms.

The main work is a five-minute video of a conversation about language.

She explained: “My work is partially about libraries and how people interact with them but also about the language of Urdu.”

In the video, we hear a gentleman talk about how he feels the language is being lost as Pakistani media, television and advertising has taken to using English words.

Libraries weren’t something that formed a part of Madiha’s upbringing but she was aware of the image that they are places that aren’t used so she wanted to see whether this is accurate. Through her research she discovered over 300 libraries are listed in Karachi, all which house more than 50,000 books each, many of which have been donated.

There is a masculine element to her work as all the people she features are men and how they use libraries, though she says this wasn’t intentional.

“Women do use libraries but the narratives from the male voices was more interesting which is why I included them in the exhibition,” she told acv.

All of the accounts were recorded anonymously and Madiha admitted she had to be discreet with taking in recording equipment.

One of the most fascinating findings of her study of libraries is just how different they are to libraries in the UK.

Collections are made up of donations often by people who move to smaller homes and no longer have anywhere to store their own personal libraries.

Similarly they attract a certain type of person – one of the voices in her film says he ‘leaves his ego at the door’ when he enters the library explaining it should be a place anyone can go, yet most are educated adults, simply looking for a place to seek solitude and just ‘be’.

The Tetley, Leeds from outside

The exhibition which took Madiha six months to put together is also not the end of her exploration of libraries. She only visited between six to seven libraries of the 300+, so she has many more in Karachi to work her way through.

Until April 22 at The Tetley, The Hunslet Road, Leeds LS10 1JQ