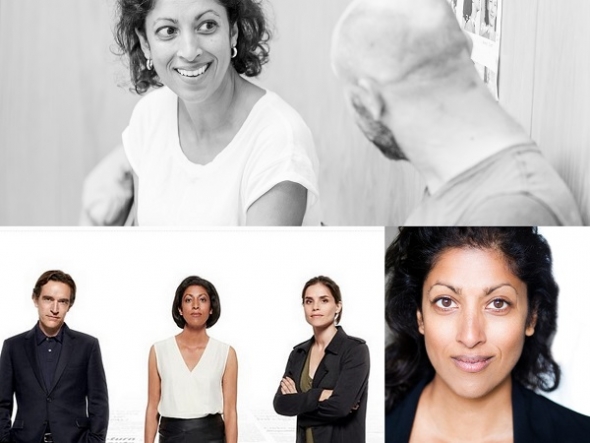 YOU WILL be seeing a fair bit of Priyanga Burford very soon – and that’s just on our TV screens.

She’s about to be on our setbox weekly in a new six-episode BBC1 drama series, called ‘Press’, about a national newspaper.

Written and produced by Mike Bartlett, Burford plays an editor on a fictious newspaper called, ‘The Herald’ and her unlikely rival newspaper is a tabloid outfit called ‘The Post’, and is edited by a character played by Ben Chaplin.

Burford will alongside a talented ensemble cast that includes Charlotte Riley, Pappa Essiedu, Ellie Kendrick, David Suchet, Shane Zaza to name just a few. It starts on Thursday (September 6) and you can see the trailer for it below.

Burford is also performing at Shakespeare’s Globe for the first time in not one, but two plays.

The first is ‘The Winter’s Tale (June 22 October 14) where she plays the lead role of ‘Hermione’, pregnant wife of Leontes, King of Sicily, (played by Will Keen), who gets jealous because he thinks she is having an affair with Polixenes, King of Bohemia and Leontes’ boyhood friend.

Hermoine has a child, is accused of infidelity and then supposedly dies.

However, without going into the plot Hermione does come back at the end – no spoiler alert here – read your Shakespeare!

The Globe blurb describes it as Shakespeare’s “great play of the irrational and inexplicable” that deals with big emotions like rage, love, grief and forgiveness.

“I don’t think there is anything ethnically specific about that role,” she explained. “That court is in Sicily and the history of Sicily at that time is, it’s a fascinating melting pot and it was the centre of the Hellenistic world for a long time. Sicily is a place where the Normans, the Arabs, the Moors, the Greeks and the Romans were all there and it is highly likely that particularly the court of my husband, Leontes was very mixed with lot of different cultures”.

Directed by Blanche McIntyre, one of UKs top talents, Burford comes back for the last scene and you wonder as an actor what she does while the rest of the play is going on.

“The part is very demanding emotionally and physically, so I am pretty exhausted. I read and I talk nonsense with the actor playing my husband, Will Keen and the actress playing Paulina (Sirine Saba), and we just have a cup of tea and chat and put the world to right.”

Alongside this role, she is also rehearsing for ‘Eyam’, a new play about to open at The Globe, where she plays the vicar’s wife, Katherine Mompesson who arrives with her husband, Reverend William Mompesson (Sam Crane) to Eyam, a village in Derbyshire to minister to the parish.

“So, the villagers despite their various differences and in fighting made this extraordinary decision to quarantine themselves off so that the plague would not go any further than them, and it’s the most incredible story of self-sacrifice and courage of totally ordinary people.”

Burford, who was born in London is of Sri Lankan heritage, studied English at Oxford University before joining the London Academy of Music and Dramatic Art – known as LAMDA and studying drama.

She has been working as a professional actor for around 20 years, appearing in plays like as ‘A Passage to India’ by Shared Experience, ‘Behud’ by Gurpreet Kaur Bhatti and was recently in ‘Consent’ at the National Theatre and on TV in shows like ‘W1A’ (BBC Series 3) and ‘UKIP: The First 100 Days’ (Channel 4) . She also enjoyed an appearance in ‘Star Wars V111: The Last Jedi’ as a Resistance Officer! She told acv it was a great experience and a lot of fun.

She has worked with satirist, writer and director, Armando Iannucci in the BBC comedy satire, ‘The Thick of It’ and applauds his decision to cast actor, Dev Patel, in his new film ‘The Personal History of David Copperfield’.

“I’ve been to see the musical, ‘Hamilton’, and it’s a perfect example where you can have all sorts of people playing historical roles and it absolutely will not impede the audience’s ability to understand and follow the story.”

Burford, who took part in the ‘Shakespeare and Race’ debates recently, at The Globe Theatre, said they discussed tokenism and representation.

Priyanga Burford in The Winter’s Tale

She explained that she doesn’t really like the word Diversity that much, but “it’s just representing the world as it is, normalising TV, film, theatre, to look like the world we live in. People who make television, theatre and film need to not underestimate the imagination of their audiences and the capacity of audiences to follow stories.”

Privacy & Cookies: This site uses cookies. By continuing to use this website, you agree to their use.
To find out more, including how to control cookies, see here: Cookie Policy
← WoW (Women of the World) Festival and its creative industries awards 2018 – voices to be heard…
Sridevi (obituary) – A fabulous life and talent in films recognised by many of today’s Bollywood icons →