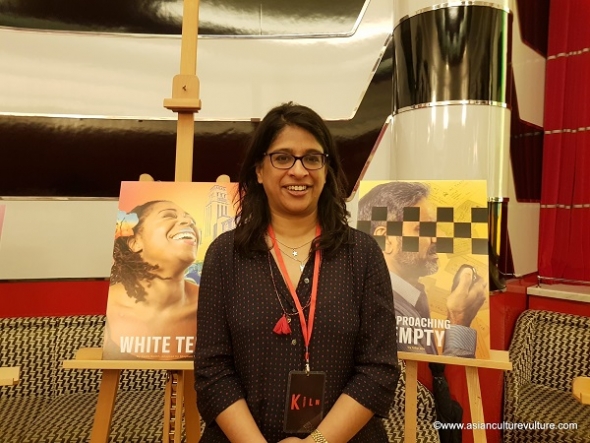 Meet the new Kiln Theatre, once called the Tricycle, which will premiere the stage version of the celebrated Zadie Smith novel, ‘White Teeth’ and two new Asian (UK and Indian) inspired productions, ‘Approaching Empty’ and When the crows visit’…

IT’S ALL CHANGE at the world-famous Tricycle Theatre in Kilburn, London.

Earlier, this morning Indhu Rubasingham, the artistic director of the theatre, not only announced the new season of work which will start at the refurbished premises in north London, but also declared that the artistic centre will now be known as Kiln Theatre. She confirmed the name change had been the result of a year-long consultation.

“It better defines who we are and what we want to be – and how we want to grow as an organisation, and a culture” she told www.asianculturevulture.com and other media at a morning briefing in central London today.

“The reason for this (the name change) is to actively locate us proudly in our community of Kilburn.”

During questions, she later asserted that diversity and gender have always been at the forefront of the theatre’s output.

“What’s really great is that those subjects are much more in the mainstream and being talked about (now), but they’ve always been high on our agenda. We haven’t changed, we are just being bolder and prouder of it.”

She said the theatre also wanted to more actively reflect the diversity around it – some 100 different languages are spoken in the borough of Brent and that along with the whole refurbishment project being called Tricycle Transformed, Kiln represented “an aspirational” theme with the reopening.

She said she had only experienced the same level of excitement about this new programme as when she first became the theatre’s artistic director.

“It reminded me of when I started the job and took me back to my first day before starting – and on that Sunday before, a friend and I visited the theatre and we took this deep breath. I had that same feeling yesterday – what I am excited about is the boldness, the gung-ho (approach) of the team – let’s just go with this,” she revealed. “We are really going out on a limb, this is who we are and this is what we stand by.”

There are five world premieres and one musical in the new programme, she announced.

The theatre which was originally founded in 1929 will re-open to the public in September, with the first production of its 2018-19 season, ‘Holy Sh!t’ by Alexis Zegerman raising the curtain on the £1m refurbished theatre.

Novelist Zadie Smith’s breakthrough and seminal, ‘White Teeth’ has been adapted for the stage by Stephen Sharkey and will be on at the theatre from October 26-December 22. It won’t be a conventional production. There will be a cast of 14 with a live band on stage. The novel itself is set in Kilburn.

“It will be one of our most ambitious projects ever. It will be a celebration of British identity and immigration over the decades – the messiness and goeyness of multi-culturalism – and British identity celebrated through movement, music and dance and a very good adaptation,” Rubasingham declared.

Rubasingham will direct this and ‘Holy Sh!t’, which is about competitive parents in London, trying to get their children into the school of their choice and crossing faith boundaries to do so.

Into the new year and Ishy Din’s experiences as a real cab driver will feed into his new ‘Approaching Empty’ – a play about two Asian cab drivers who befriend each other in the 1960s and enjoy a friendship which chronicles the changes in a northern industrial town over time.

“I am a big fan of Ishy Din. You may know of ‘Snookered’ at The Bush from four years ago.

“’Approaching Empty‘ is a play that set’s in a cab firm in the north east and focuses on a friendship between two men who emigrated in the 1960s from Pakistan and what the pressure of a (declining) economic climate does to their friendship,” Rubasingham asserted.

The play was developed by Tamasha who took Din on as a fledgling playwright.

This season will close with Anupama Chandrasekhar’s ‘When the crows visit’, a play set in contemporary Chennai and about women supporting patriarchy and discrimination after a a young man is accused of a committing a violent sexual crime.

“It looks at the lengths a mother will go to protect and safeguard her son,” Rubasingham disclosed.

Also announced are ‘The Son’ by Florian Zeller, a French play translated by Christopher Hampton and which has just opened in Paris; ‘Wife’ by Samuel Adamson; ‘Blues in the Night’ conceived and originally directed by Sheldon Epps.

There will also be a major community production involving as many as 100 people on and off stage will also take place at the theatre and has been made possible by Heritage Lottery Funding.

Called ‘A friendly society’ it will be based on the buildings’ origins as a centre for the Foresters Friendly Society, a group created to look after the care and well-being of the local community as they “walked through the forests of life,” according to its founders.

There will be more seats, improved and increased wheelchair access, better toilets, improved sightlines, and a flexibility in how the theatre space is used, Rubasingham also divulged at the briefing. She also said a new café at the refurbished building would help the theatre “not be such a secret on the Kilburn High Road.”

She commended her team for working so hard to put such a programme together.

The Tricycle Theatre, as it was known previously, has an international reputation for staging important and influential work. Rubasingham has been artistic director at the Kiln since 2012