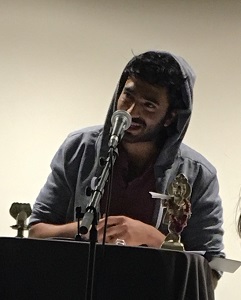 Ronak Patani single handedly becomes his ‘British’ and ‘Indian’ self in one performance. Speaking to each personna, guilt tripping the other and exploring the inner conflict felt by so many of us….

EXCITINGLY, this performance could very easily have been mistaken for a finished product.
As actor and spoken word artist Ronak Patani uses nothing but a hoodie to switch fantastically from being traditionally Indian, to a streetwise, hoodie wearing Brit.
He takes the audience through a conflicted dialogue; his Indian conscience questioning the decisions and actions of his British self. It’s incredible what one man can do with a change in accent and a hoodie, but what it basically comes down to, is Patani’s ability to bring life to his words and characters.
Highlights include a hilarious ‘debate’ about Kanye West and a brazen attack on peoples belief that there are different levels of immigrants and “we’re not like them”.
Patani moves from topic to topic, humour to damn right serious in a fluidity that keeps the audience on their toes.
Like the reality of being British Indian, just when you think you know what it’s about, the counter argument kicks in – and we’re always on edge.
#brtishindian is one to watch as potentially being talked about a lot in the future. Be sure to look out for the finished product!

Spoken word artist, Ronak Patani performed 30 minutes of his work in progress show ‘#britishindian‘ at the Southbank Centre, as part of Alchemy on Tuesday, May 23rd 2017. The festival finished on Monday (May 29)