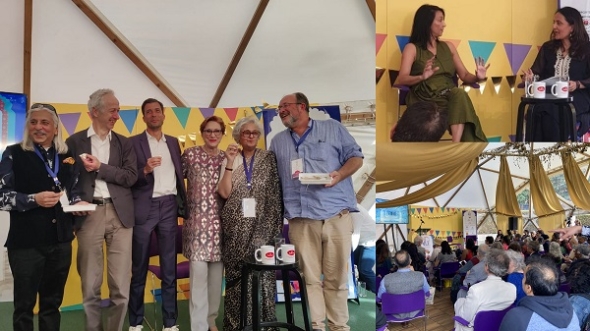 OFTEN referred to as the world’s greatest literary show on earth, the Jaipur Literature Festival’s London edition at the British Library got underway last night, (June 10) with a powerful restatement of in-person exchanges and novelist Monica Ali headlining.

The festival opened with a number of opening addresses and www.asianculturevulture.com enjoyed Sanjoy K Roy ‘s witty welcome. The managing director of Teamwork Arts, which produces JLF, was in fine form and said that the last edition ( – the festival in India earlier this year was a hybrid -) had welcomed five million people.

Founder and co-director of JLF, William Dalrymple, said: “It is wonderful to be back in person”.

There was a general sense of anticipation throughout the audience for what is to come this weekend, a clear sign that the festival is loved by many.

Rebecca Hart, senior programmer of the The British Council, introduced the first conversation of the weekend between authors Monica Ali and Jaishree Misra about Ali’s latest book, ‘Love Marriage’.

The book follows a couple, doctors Yasmin and Joe as they tackle their counter-cultural families on the lead up to their wedding day. With themes of love, marriage and family relationships, the novel is not a straightforward exploration of love, but about how we love in today’s Britain.

Ali did a short reading of the opening pages of her book, and then went on to explain that “the narrative backbone is the necklace on which all the beads are threaded”, which in this case, was sex.

Sex features a lot in the book and in many different forms: sexual identity, revenge sex and sexual addiction, and is a big part of how the characters identify themselves.

Both Ali and Misra tried hard not to give spoilers away (*one coming up*), but one important storyline within the book is that Joe is a sex addict. Ali admits this was the most difficult to write, structurally, and instead of writing from Joe’s perspective, she wrote from his therapist’s point of view.

“We need to be close to Joe without it being from his perspective, so we do not lose reader sympathy,” she explained.

Ali’s choice of British and Bangladeshi families was because she wanted to play with South Asian culture being more closed than white culture, giving an example that ‘posh’ white families like Joe’s are far more open minded with nudity than in South Asian culture.

Misra questioned Ali on why she reverted back to talking about race, after her steer away from “brown skin” after her novel ‘Brick Lane’, to which Ali replied “how can you get away from your ethnicity?”

Excitingly, Ali is working on a TV adaptation which is coming soon.
ACV covered a similar talk which occurred during the digital part of JLF earlier this year – that time Ali discussed the novel’s themes with British writer and journalist Bee Rowlatt. (See link below).

A minor fire in the Durbar Theatre caused a change of location to the Piazza Pavilion and a slight delay, but there was no further disruption.

Among those welcoming festivalgoers for the opening session were Dame Carol Black, chair of the British Library, who described the festival, as “a true festival of words, ideas and ocolours”; co-founder and director Namita Gokhale followed and said that, “A world without stories would be a world without history.”.

JLF London is sponsored by Haldiram’s.