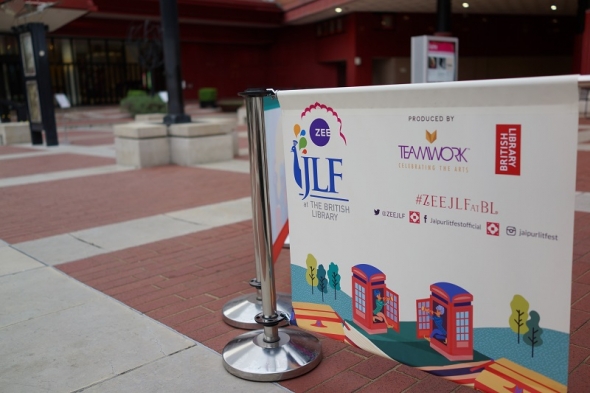 www.asianculturevulture.com is delighted to announce that it is a community partner to the ZEE JLF at the British Library, between June 14-16.

The sixth London edition of the world’s most famous literature festival has over 40 sessions and 90 speakers descending on the British Library at King’s Cross over that weekend.

Book early and don’t miss out! Get yourself a weekend pass, and enjoy as much as you can! Just click on the picture to purchase tickets!

Look out for our coverage of the festival, which has a number of high-profile speakers hitting London – among them Tristram Hunt, director of the V&A, and ex-Labour MP; Shashi Tharoor, Indian MP and author, Venki Ramakrishnan, Nobel Laureate for science, Navdeep Suri, former high commissioner of Indian to the UK, Manisha Koirala, Bollywood actor and former Pakistani cricketer, Shahid Afridi.

There will also be customary musical mornings to get everyone in the mood – acclaimed Tagore chanteur Reba Som will be part of the early bird welcome, and so too is Amrit Kaur Lohia, a UK-based versatile singer-songwriter and sarangi player.

For the first time, JLF will head to Belfast in Northern Ireland between June 21-23.Look out for more details on this in the coming days but book early, if you don’t want to miss out!

ACV is also presenting one of the sessions at the British Library as a community partner.

The festival, which started in the city of Jaipur in India more than 10 years ago, has gone onto establish itself as the international literature festival par excellence, earning itself the sobriquet, the greatest literary show on earth.
www.asianculturevulture.com has covered both ZeeJLF in London and in Jaipur itself.

Sailesh Ram, editor and founder of www.asianculturevulture.com, said: “We are thrilled to be a community partner to this amazing festival. ZEEJLF is a great meeting place of people, ideas, and cultures and offers a superb platform for exchange and friendship. We look forward to giving our readers and followers all over the world the best from the fest at the British Library. Join us there!”

You will find our stories on the site and head to YouTube or Vimeo for our video interviews with authors, including Marlon James, Anita Anand and Kamila Shamsie (YT) and Meera Syal, Anuradha Roy, and William Dalrymple among others (Vimeo).