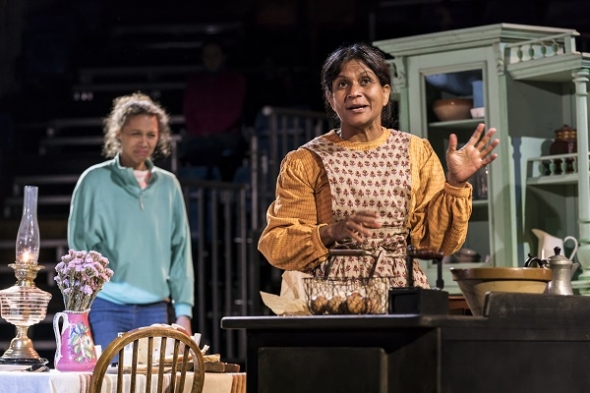 How little things lead to big things for all of us …

THIS is a play by the Pulitzer Prize winning American author, Thornton Wilder and is currently on at the Open Air Theatre, Regents Park, London until Saturday (June 8).

The play is described as ‘meta-theatre’ – a play that tells you it’s a play, and it features a ‘stage manager’ (played by Laura Rogers), who is the narrator and introduces you to the town – Grover’s Corners, New Hampshire.

Through Rogers we get to learn about the town in detail – its geography, latitude and longitude, the population, how many churches the town has and other minutiae, as we join in the daily lives of the citizens going about their ordinary business. “In our town we like to know the facts about everything.”

Some parts have an overarching narrative of storytelling, while the rest is naturalistic and encased in a sturdy realism – but there are self-referential elements too – about it being a performance, “here is some scenery for those who think they have to know where the scene is taking place!”

The play is in three acts and the story begins on May 7, 1901 “just before dawn” and ends in summer 1913 before the Great War begins and presents us with a slice of American life.

The first act is Daily Life, where we meet the citizens, such as Doctor Gibbs (finely played by Karl Collins) who gets his paper, The Sentinel, from the paper boy wondering, if there is “anything serious going on in there”, while his wife, Julia Gibbs (Pandora Colin) makes him his coffee and dreams of going to Paris and the audience meet his neighbours, Sentinel editor Webb (Tom Edden) and his wife, Mrs Webb (Thusitha Jayasundera is really enjoyable to watch in this period piece).

Later, there is a lovely scene between Mrs Webb and her daughter, Emily (Francesca Henry). The young girl asks her “Mama, Am I pretty?” and the reply comes “You are pretty enough for all normal purposes”.

We learn that George Gibbs (Arthur Hughes) likes Emily and the second act is ‘Love and Marriage’ with the courtship between two young people, while the third act deals with ‘Death and Eternity’. In the ensuing decade nothing much changes in the topography of the place but there are obvious references like how by 1913 everyone has begun to lock their doors.

The stage at Open Air Theatre in Regent’s Park is shaped like an amphitheatre and since it is open air, the light changes during the course of the evening and unpredictable things do happen – such as the rain – and it did on the night acv was present, so you never know whether the show will go on or not. It did! And the audience sat there dripping wet wanting to know what happened next!

Wilder constructs the detail and it is very precisely presented and it’s a fine study of ordinary people and their idiosyncrasies.

There is something about the story and its characters that seeps into your overall being as you allow yourself to be immersed in a different world (on the surface) to our own and initially you wonder what it’s all about… but it becomes apparent that this is about the big picture, and is really, a profound meditation on life.

Most of the action takes place on the bare stage devoid of props with actors miming actions such as having coffee, or when the young couple, George and Emily go for an ice-cream soda, but the piece de résistance is finally in the third act when the whole caboodle of a birthday breakfast is laid out in period style for Emily.

There is a cast of 18 and special mentions should be made for the drunk church organist, Simon Stimson (played by Peter Hobday) who caused “the worst scandal town has experienced” and the milk-man Howie Newsome (Louis Martin). The production is directed by Ellen McDougall, artistic director of the Gate Theatre, Notting Hill.

It takes a little while to get into, but the play grows on you and you emerge wiser and do catch it before it ends, if you can.
Acv rating: **** (out of five)