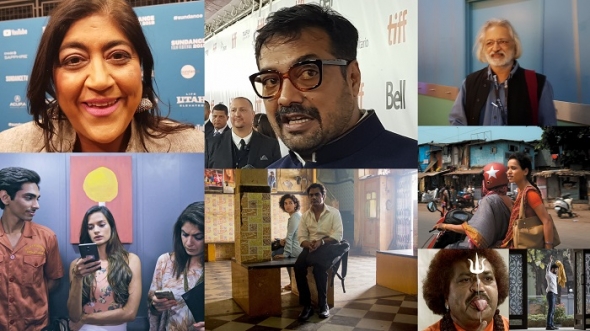 Festival marks 10 years, has 25 films with four world premieres and ‘in conversations’ with top directors including Gurinder Chadha, Anand Patwardhan and…

HE IS OFTEN compared to Quentin Tarantino in terms of style and impact, but Anurag Kashyap’s films tend to have a more stirring political message beneath the swagger and threat his characters’ routinely display.

The master Indian auteur is fresh from the success of making ‘Sacred Games’ a Netflix series that has enjoyed wide international acclaim and secured a two thirds non-India based audience.

Kashyap been a powerhouse of Indian independent cinema for more than a decade, and will be in conversation at the BFI Southbank next month about his craft and his exceptional career.

If you are interested in independent Indian cinema and its relationship to the more commercially driven Bollywood, this is unmissable. Kashyap straddles both (more recently) and unlike some Indian indie directors has much time for Bollywood.

He will come as a guest of the Bagri Foundation London Indian Film Festival (LIFF), which marks its 10th year this year and announced its full programme last Friday (May 10).

The festival begins on June 20 and runs for nine days in the capital and will present a range of films in other parts of the country too.

Another great filmmaker whose latest film is being screened at the festival is Anand Patwardhan.

The documentary filmmaker is an iconic figure with a truly global presence and a virtually legendary status – ‘Reason’ had its world premiere at the Toronto International Film Festival (TIFF) last year and remains hugely controversial.

‘Reason’ charts the rise of right-wing Hindu nationalism and outer lying political groups that support and promote the Bharatiya Janata Party, better known as just the BJP, and are India’s current governing administration under the leadership of Prime Minister Narendra Modi.

The film looks at the wider cultural context of these groups and their often vociferous opposition to rationalism and science. Patwardhan, as fearless as ever, also makes startling claims within the film, about the Mumbai terror attack in 2008.

ACV saw ‘Reason’ in Toronto and will preview the film with an interview with Patwardhan conducted shortly after its screening there.

One of the most promising filmmakers of her generation is also presenting a film at LIFF this year.

Just a year ago, Rohena Gera’s film, ‘Sir’ was making waves at Cannes in the Directors’ Fortnight (Quinzaine Des Realisateurs) section. Her film enjoys a UK premiere and features two rising stars of Indian cinema, Tillotama Shome and Vivek Gomber. We have an interview from our coverage of the International Film Festival and Award Macao (IFFAM) in which Shome (a competition jury member) talks to us about the film. She and director Gera also spoke to us in Cannes a year ago.

Another Toronto favourite is also coming to LIFF – Vasan Bala’s ‘The man who feels no pain’ has charmed audiences everywhere it has gone since TIFF, where it was a midnight madness screening and won an audience favourite award there.

ACV then followed its success to China (Macao) at IFFAM in December, where its debut lead actor Abhimanyu Dassani won the best new young actor at that festival).

Both he and fellow female co-star Radhika Madan spoke to acv about how they broke into films to make their big screen debuts in Bala’s Hindi language breakout hit, ‘Mard Ko Dard Nahi Hota’.

Elsewhere, Bangladesh star director Mostafa Sarwar Farooki returns to LIFF, with his latest film – the hard-hitting ‘Saturday Afternoon’, based on the real terrorist attack on the Holey Artisan Bakery in Dhaka in July 2016. Farooki talked to acv about it last year and he is a director with a rising international reputation.

Other highlights include …
• The Opening Film is ‘Article 15’ with rising star name, Ayushmann Khurrana, in an uncompromising film cop drama that is described as exposing the awfulness of caste in India and is referenced to in the title – Article 15 outlaws discrimination on the basis of caste.
• The Closing Gala Film is Ritesh Batra’s ‘Photograph’. ‘The Lunchbox’ director enjoyed a world premiere for his new film at the Sundance Film Festival in the US earlier this year. You can see acv red carpet interviews with Batra and female lead, Sanya Malhotra. (Click) • Director Gurinder Chadha will talk about her latest film – ‘Blinded by the light’. A Sundance hit set to hit screens in the UK in August, she will discuss this new feature film and her forthcoming TV spectacular period drama, ‘Beecham House’, set for ITV this summer. You can see Chadha, her co-stars and writer, Sarfraz Manzoor, talk about the film prior to its world premiere at Sundance here.
• Radhika Apte, a star of ‘Sacred Games’ will also be in conversation at LIFF about this and the surprise blockbuster, ‘Padman’ and one of India’s biggest hit films last year, ‘Andhadhun’.
The festival is split into four strands this year…
Bengal Tigers is a look at Bengali auteurs. Veteran filmmaker Buddhadeb Dasgupta presents his latest work, ‘The Flight’, while there is an opportunity to see ‘Khandhar’ made by Mrinal Sen, one of India’s most seminal directors, who died late last year.
Young Rebel – Rising filmmaker Rima Das’ TIFF 2018 premiere, ‘Bulbul can sing’, follows on from the success of ‘Village Rockstars’ and comes in to LIFF, in this section. Also in this strand is a film, titled ‘The Lift Boy’ and a Ladakhi drama, ‘Chuskit’.
Extra-ordinary Lives – as well as Bala’s hit ‘The Man who feels no pain’ is joined by Kannada language whodunnit thriller ‘Arishadvarga’ and the feel-good documentary, ‘My Home India’.
Film, Power & Politics sees Patwardhan’s ‘Reason’ and Farooki’s ‘Saturday Afternoon’ and a film described as a Gandhian values black comedy, ‘Gadhvi’ featured.

Cary Rajinder Sawhney, executive and programming director of the London Indian Film Festival, said: “From the perspective of our 10th Birthday the festival has dynamically opened the UK mainstream media and audiences to Indian and South Asian independent cinema in all its linguistic diversity and that’s something we are extremely proud of.

“Punching above our weight as always, this year is probably our strongest programme ever with exciting world premieres, rarely seen archival masterpieces, and some seriously cutting-edge dramas and documentaries, in 23 venues across five UK cities and towns.

“We invite you to immerse yourself into the cinema of a billion lives.”

Make sure you’re connected to us for all the best coverage from LIFF, if you’re not signed up to Twitter, Facebook, or Instagram, you could be missing out! We will be taking a closer look at the festival next month and building up to its opening, so stay close!