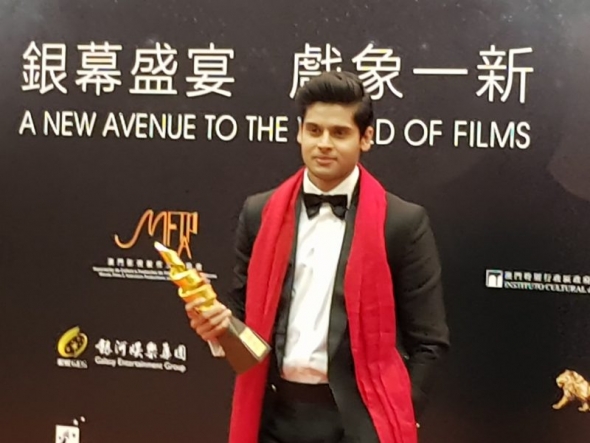 DEBUTANT actor Abhimanyu Dassani, who stars in the off-beat Indian Kung Fu style comedy, ‘The Man who feels no pain’ was named the best new young actor at the International Film Festival and Awards Macau (IFFAM), on Friday evening (December 14).

It is quite the triumph for the 28-year-old who told www.asianculturevulture.com earlier that this was his first ever professional production – he has not even appeared in a proper short film before.

He said director Vasan Bala whose film enjoyed its world premiere at the Toronto International Film Festival (TIFF) and won an audience award there, made him believe in himself and he paid tribute to his director in the press room post his award.

The film also opened the Mumbai Academy of Moving Image Festival (Mami) in October and Bala told acv in Macao that the film will be released in India in March. He expects there to be a UK release too but could not confirm a date.

Dassani stars as ‘Suriya’ – who suffers from a bizarre condition in which he feels no pain – people can punch and attack him with needles and knives, but he does not feel the physical effect.

Slightly withdrawn and obsessed with martial arts and a particular competition, he grows up with a singular ambition to be the best martial arts competitor he can.

In the film he teams up Radhika Madan’s character and the two set about fighting the world – almost literally. The film is a wonderful homage to the Kung Fu movies of old and is very funny.

It also pays tribute to Indian B-movies and expresses a real affection and understanding of them.

Dassani told the gathered press after the awards: “My director always believed in me and this is further vindication that others believe in me too.”

Both he and Madan spoke to acv earlier about the film and respective careers – both have signed for new films but were unable to reveal them at the time of going to press.

Dassani impressed a distinguished panel of judges, chaired by one of the great masters of Chinese cinema.

Chen Kaige was among the award winners on the evening – he was presented with a Spirit of Cinema Award in light of his achievements as a filmmaker of international repute.

His ‘Farewell my concubine’ (1993) is still the only Chinese film to have won the top award at Cannes, the Palme d’Or.

Kage’s ‘Yellow Earth’ (1984) is regarded as an exemplary piece of filmmaking and opened the world to the force and majesty of Chinese cinema at its very best.

In his youth, he served in the Chinese Army and had to do labour during the Cultural Revolution.

He told the press after receiving the award that his experiences had made him a better filmmaker and he can look back on his early life with a sense of preparation – today he is recognised around the world in the film community, has served on many juries and is revered in a way that gives China pride and kudos.

Also gracing the post awards’ press conference room was Zaira Wasim, named by film trade magazine as an Asian Star along with four other exceptional figures in the Asian continent film industry.

The five were presented with awards during the closing awards ceremony, alongside other IFFAM winners.

Earlier in the day, Wasim spoke exclusively to acv about the award and her career to date.

The 18-year-old is already a known entity in China – having had two blockbuster hits there alongside Indian superstar Aamir Khan. She talked to acv about her latest film, ‘The Sky is Pink’ alongside Priyanka Chopra and Farhan Akhtar.

Acv also has interviews with the talent behind ‘The Man who feels no pain’ – Balan talked to us at TIFF, while Dassani and Madan revealed how they broke both into films.

We also have an interview with Shome and ‘Sir’ is expected to come to the UK. It is already playing in theatres in France and Germany.

Our interview with Shekhar Kapur, IFFAM talent ambassador is on our Youtube channel.

He said IFFAM was getting bigger and was like a growing family – and he suggested that he is ready to do a film about the region. In our interview, he said he was looking at making films from novelist Amitav Ghosh’s Ibis Trilogy.

We also hope to write about the New Chinese Cinema strand at IFFAM, having seen ‘Dear Ex’ and ‘Baby’ – both big hits in China earlier this year.

We also got a chance to speak to Zheng Kai, who like Wasim was a recipient of a Variety Rising Star Award. He has appeared in a film with Matt Damon, is keen to break into the Western cinema and told the other co-recipients: ‘We should make a film together.’

Exciting, scary, intriguing – you have been warned.

Full list of  IFFAM winners and those presented awards

Privacy & Cookies: This site uses cookies. By continuing to use this website, you agree to their use.
To find out more, including how to control cookies, see here: Cookie Policy
← Got the festival frenzy? ‘Retracing our footsteps’, ‘ZEE JLF at the British Library’ and London Indian Film Festival attract star contributions and ready to spark stirring debates…
‘How To Be Human – Life Lessons by Buddy Hirani’ – book is hit among film glitterati and comes to the UK now… →