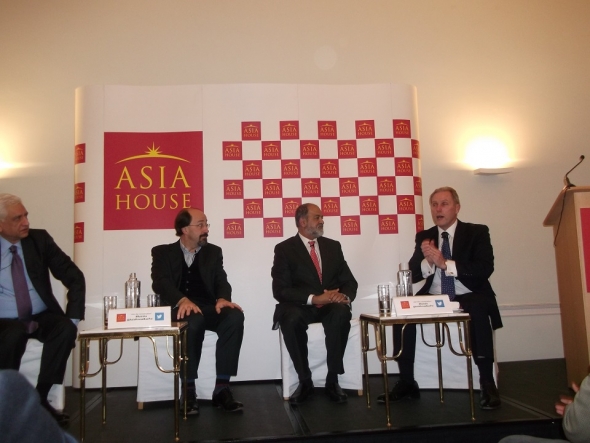 The world’s second most populous country has almost ground to a halt economically – why and what can be done to change it, ask the authors of a new book…

INDIA only reforms when it is in a crisis – that is what it takes to get the country moving.

This was a sentiment that was almost consistently echoed among a panel of distinguished speakers discussing the country’s economy at the launch of a new book,  ‘Reimagining India – Unlocking the Potential of Asia’s Next Superpower’, at Asia House in London on Tuesday (November 26).

With essays by 64 different economists, business figures and policy wonks and edited by global business consulting powerhouse McKinsey & Co, it outlines the country’s problems and challenges as the writers see them, and suggests solutions.

Adil Zainulbhai, editor of ‘Reimagining India’, and chairman of McKinsey India, said the book was an appreciation and response to present circumstances and challenges.

Alongside him on the panel was Dalip Pathak, senior advisor and former managing director of investment firm Warburg Pincus and Bill Emmott, former editor of ‘The Economist’, and now a writer and consultant on international affairs.

The discussion was moderated by Michael Lawrence, CEO of Asia House, a non-profit culture and business organisation that promotes understanding and contact between the continents of Asia and Europe.

Towards the end there seemed to be a general consensus among the panel that India only really moved forward when it had to, suggesting perhaps, that it is a country of procrastination and has difficulties making (tough) decisions.

Asked by Lawrence at the end whether they felt optimistic or pessimistic about India over the next five years, the panel was cautiously optimistic, but pointed out that five years might be too short a time to make a proper assessment. The key question was also just how much progress.

“There’s an essay in the book which says India only reforms in a crisis. And the question of today, is the crisis enough?” said Zainulbhai to a packed hall.

In the early part of this century, India’s economy was growing by as much as 10 per cent a year, but more latterly the rate has fallen by as much as half, outlined Zainulbahi.

“There’s a mounting frustration,” he continued, “that a whole series of actions within India, or circumstances outside it, was leading to a decline in the growth of the country – the fact that the lives of 1.2 billion people were not improving as fast it should – that was the real issue.”

He said the book presented a balanced picture.

“It’s not an India shining book, but nor is it an India depressing book. It’s realistically setting out what the challenges are and what can be done.”

Lawrence raised the issue of the “paralysis of bureaucracy” suggesting it was a “major stumbling block” standing in the way of India making further economic progress.

Zainulbhai felt the issue was not as difficult as it looked on the face of it.

Bureaucrats were often stifled by particular circumstances and environments, but the same bureaucrats with the backing of a strong leader, “could be seen doing wonderful things in a different environment”, he argued.

“With the right kind of leadership this kind of thing will go away, it’s not a structural issue,” asserted Zainulbhai.

The panel in response to a question about corruption, discussed the intersection between bureaucracy and corruption, where officials can be bribed for contracts and opportunities.

Zainulbhai said it was important to differentiate between ‘legalised corruption’ and ‘illegal corruption’ .

He explained ‘legal corruption’ was “where there are certain rules and you can lobby for something”, while ‘illegal corruption’, was where you paid to get things done in your favour.

He stressed it was important to identify what was exactly at stake, as one of the economists, leaving aside the moral considerations, had done in the book.

“The thing that makes the biggest difference is not whether there is corruption or not – but a wrong decision.

“The cost of a wrong decision is significantly higher than the cost of corruption on an economy like India’s,” he reasoned.

Emmott humorously stated some forms of “predictable corruption” where you wined and dined a potential client, without having the means to afford it, was not in any way as serious as directly bribing officials for contracts.

Zainulbhai gave the example from the book of a road contractor who paid just one official for a contract and was able to build the road the cheapest and the fastest.

“The worst cases of corruption are where you have to pay a different person for every mile,” he stated.

Pathak said that bad decisions could always be reversed and it was not uncommon to make them in business, but what was worse, was a state of inertia.

“I agree with you (Zainulbhai) to a point, but taken too far it leads to the undermining of the rule of law.

In India, some mining operations have been suspended due to these very issues where there have been allegations of bribes for access and legal cases are outstanding.

Pathak said the issue of enforcement of commercial contracts in India was very weak and that in an international comparison, India was below Bangladesh.

Zainulbhai believed that improving primary education remained vital to India’s progress and raised the point about there being many India’s, not just one; he also claimed there was hope in states competing against each other to develop.

This was a wide-ranging discussion that also covered India’s upcoming 2014 elections and the spectre of right wing Hindu nationalist Narendra Modi becoming prime minister and the growth and political impact of the middle class, as well as its largely reactive foreign policy.

In an opening address, Virander Paul, India’s deputy high commissioner, who was among the audience but not on the panel, welcomed the book but said he liked to think of it as “India – Re-emerging.”