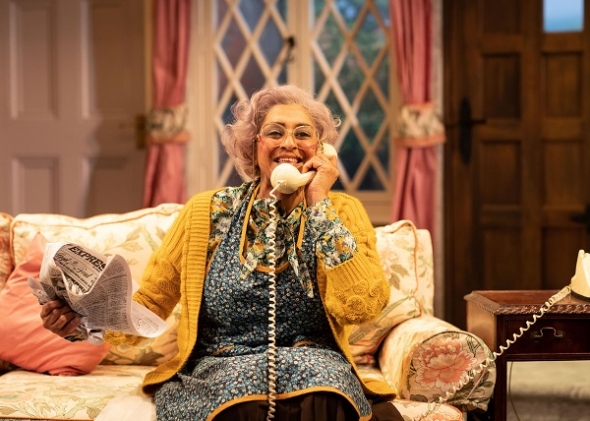 IT IS THE FUNNIEST play I have ever seen and I’ve never laughed so much in the theatre.

This comedy farce written by Michael Frayn made its debut at the Lyric, Hammersmith 37 years ago in a production, directed by Michael Blakemore with well-known actors Patricia Routledge and Paul Eddington; it has since been performed in the West End, on Broadway, and across the world and and is having a London summer revival right now.

Described as a ‘meta-farce’, the author says in the programme notes that he wanted to explore “what would happen, I wondered, if the strictly ordered disorder of a farce onstage was overrun by the real disorder of actors’ lives off…?”

It’s a simple premise, but quite hard to pull off – and there are three acts.

In act one the cast is doing a technical rehearsal for a play called, ‘Nothing On‘ that they are about to perform at a regional seaside theatre in Weston-Super-Mare, so the audience sees the play from the front – i.e. the set, the doors (a constant feature as these are opening and shutting).

The second act which is set some weeks later shows the backstage view of what’s going on –which the audience in a real play would never see.

The third act is during the end of the tour of the play within a play
and the relationships are quite frayed, so things keep going wrong.

It’s hard to describe it, but suffice to say it makes you laugh every
step of the way. The actors play themselves as well as their characters within the play of ‘Nothing On‘, which you can see them rehearsing.

There is also a separate programme for the other play, ‘Nothing On‘, for instance, Meera Syal is in fine form as the lead actor, Dotty Otley (who plays Mrs Clackett in that other play) and the show opens with her coming on stage, carrying a plate of sardines trying to answer the phone, all the while director, Lloyd (played by Lloyd Owen) is giving her instructions to ‘take the sardines, leave the sardines,’ as part of the cues, and this becomes a kind of running joke.

It’s set in a country home and a couple come in pretending to be an estate
agent and an assistant, hoping to catch a bit of afternoon nookie before the house is sold, and the owners of the house turn up, while there is a burglar (who is really a wayward actor) – that’s the plot of the play within the play – but it’s not important, except it’s funny to watch and the real plot is about how the actors’ personal lives overtake their characters and how theatre works, and the audience can marvel at the choreography of the chaos.

There is a lot of gossip and backbiting, such as the fact that the director is having an affair with the leading lady Brooke Ashton (played by Amy Morgan) and is also stringing along the assistant stage manager, Poppy (who is also an understudy), while it is Dotty’s money which has bankrolled the production and she is dating the much younger actor, Garry Lejeune (Daniel Rigby).

Noises off is directed by Jeremy Herrin (also artistic director of Headlong theatre), and is currently at the Lyric Hammersmith and was due to end on July 27 but the run is extended until August 3 and so grab a ticket while you can.
ACV rating: ***** (five out of five)

Transfer to West End from September 27-January 4 (2020). It was announced this morning (July 24) that this show will play at the Garrick Theatre (2 Charing Cross Road, London, WC2H 0HH), with the same cast. Check here for tickets: http://www.NoisesOffPlay.com