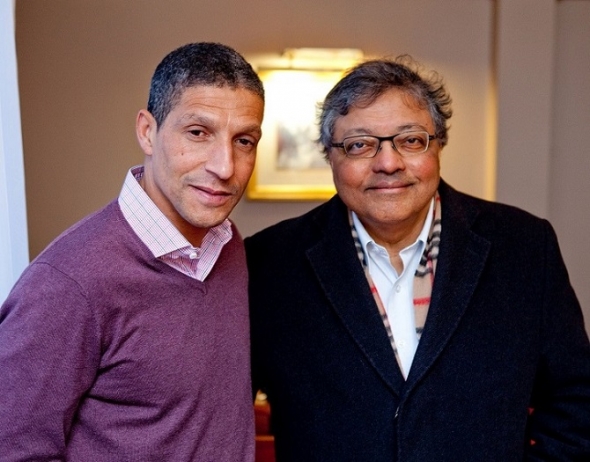 RACISM in football, Sir Alex Ferguson’s recent and updated biography, Sachin Tendulkar’s impending retirement from cricket and the continuing debate about women in sport are all very lively topics for debate.

So, it is something of a treat that you will have the chance to quiz one of Britain’s top journalists and get the inside track on many events, issues and personalities in world sport today.

He’s selected two other leading journalists, Polly Tonybee of ‘The Guardian’ and John Pienaar from ‘BBC 5Live Radio’ to ‘perform’ – as well as himself in his tried and tested one man show, ‘Rock N Roll Politics’ – and all on separate evenings.

Bose told www.asianculturevulture.com he was very receptive to the concept of a journalist talking to an audience on a stage and then discussing subjects raised by the speaker and the audience.

“I have (done this kind of thing before) – sometimes, it’s involved being interviewed on panels and chat shows,” said Bose.

“But I have also done a performance in the Rich Mix theatre in east London. This involved reading out a scripted piece accompanied by music, which had been specially composed for the piece, and played on the piano and other instruments. At selected intervals, I would stop reading and the music would start.”

It dealt with a very personal topic though – conducting the last rites for his father in India.

“The piece was entitled ‘Moldy Rice, Panama Hat and a Delayed Memorial’. It was about going to Benares (Varanasi) in India and performing the memorial rites for my father in what is called the Pindi ceremony. It explained why I had waited twenty years to perform this essential Hindu ceremony.”

This time he will be speaking about the subjects closest to his professional heart: sport and its wider impact on society and politics.

He isn’t too bothered by being in the spotlight or grilled by the audience, as he is quite used to ‘performing’, he told us in an email exchange.

“I believe a journalist is a performer. Every time a journalist writes or broadcasts, whether on television or radio, he is presenting himself to the public.

“The difference here is that the journalist can see the audience as he performs and gauge the reaction.

“This makes it different from the usual circumstances where the journalist is not present when his writing or his broadcasts are being judged by his audience. He may get feedback but it is not instantaneous as it will be in this case.”

That’s still a thrilling and valuable aspect for any journalist in this age of almost instant reaction – and it’s not just confined to 140 characters!

As Richards pointed out there’s a danger too many of us sit behind a screen and never engage with our audience or make any effort to find out what it might be thinking about our output (you can on ours, by clicking on the social media tabs at the top of this page…;).

Richards said: “At Tara Theatre we are going one step further by getting three other top journalists to perform live too.

“The audience can meet the likes of Polly Toynbee and the BBC’s John Pienaar and they can engage with readers, listeners and viewers.

“Yes, there is a very big role for social media but I’m excited that some of the country’s best journalists are also appearing on stage with me, bringing their columns, broadcasting and reports to life. There is no better theatre!”