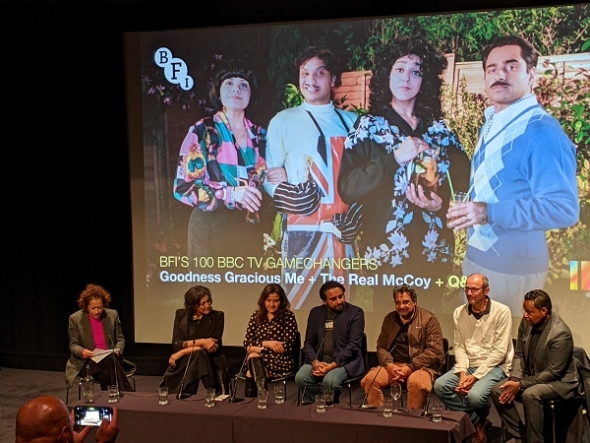 > Cast of BBC TV programme, ‘Goodness Gracious Me’: Meera Syal, Nina Wadia, Sanjeev Bhaskar and Kulvinder Ghir, and producers of this and The Real McCoy, Anil Gupta and Terry Jervis (The Real McCoy) gathered to discuss cultural legacy and impact as part of BFI’s 100 BBC TV Gamechangers Festival which concludes on December 10.

FOR MANY ‘Goodness Gracious Me’ (‘GGM’) was a sense of arrival, of finally being seen and not ignored and it was clear from the gathering at the BFI, that there remains a considerable groundswell of affection for the programme – even over 20 years later.

Sanjeev Bhaskar said he had virtually lost count of the amount of pictures he had been sent of Rishi Sunak when he had became Prime Minister, with the caption – ‘Indian’, communicating an associated pride. In ‘GGM’, he played an older Indian father/uncle figure who would simply utter “Indian” to anything positive or vaguely recognisable. It was funny and very relatable.

Producers Anil Gupta and Terry Jervis explained why both shows did not go on – both were hugely successful, had strong ratings, ‘mainstream’ appeal and approval but lacked support at the highest levels after a time.

“A lot of TV shows rely on the producer or director to drive it,” explained BBC Producer Terry Jervis, speaking at the panel on Sunday (November 27).

The BBC2 Controller changed after series 5 of ‘GGM’ and wasn’t committed to it, Gupta pointed out, without divulging their name. “It’s not their show – that’s just how it works.”

He said you need a person of colour at commissioner level to ensure representation and diversity are properly served. Currently, there are no people of colour at senior controller level in UK television.

“Here we are 30 years later,” he lamented. The TV Show began in 1996 and the radio sketch show that proceeded it came slightly earlier. (Read below)

The panel also talked about influences following a question from the audience about it.

Syal said the late Victoria Wood was a big influence on her.

“She was a quiet revolutionary feminist who wasn’t a size 10,” she said.

Bhaskar: “We didn’t have a template for what we were doing – we were looking at the strange things our parents or uncles said. We were tapping into something fairly unique.”

Ghir added: “You only had comedy to survive – they weren’t any role models at that time.”

He said comedy was changing too at that time, with people telling stories rather than gags.

Nina Wadia expressed how much she wanted to do a contemporary show covering political issues – and encouraged by the audience, who agreed – joked: “We would embrace those issues. I am desperate to play Priti Patel or Suella Braverman.” It got the loudest round of applause.

The original show was mostly a satire and play on British Asian culture and as the cast collectively emphasised, made from a place of respect and love.

It was, as Jervis said, an opportunity also to explore black and Asian subcultures.

‘The Real McCoy’, a black comedy sketch show from 1993-1996, reflected the cultural differences between islands in the West Indies or differences between Caribbean and African heritage Britons; while ‘GGM’ touched on stereotypes within the Asian community, such as the stingy British Gujarati and similar.

“To the higher ups, we were just all brown people, they wouldn’t understand any of it,” joked Gupta, now at Sky Studios.

Gupta made the point that the show always focused on the humour – above and beyond what the cast and writers might have wanted to say.

The cast talked about some of their favourite characters – Smita Smitten the showbiz kitten said Syal; the Sikh Panesars from the Asian ‘Top Gear‘ sketch; Ghir’s The Bhangra Man, Wadia’s mother’s character who would say, quite cryptically at times: “And a small aubergine”. And collectively, The Coopers – the Asian couple who denied any sort of ethnicity at all and wanted to be seen and accepted as completely (white) English.

Syal elaborated on the showbusiness satirical character: “The number of gay men who have approached me to do that voice as their voicemail…”

Bhaskar said he enjoyed playing the Maharishi character whose mantras or aphorisms were unintelligible or nonsensical and therefore very funny. He also said Ghir’s ‘Fat Kid’ was a tour de force on the show.

“He’s one of the best physical comedians around,” he said of Ghir.

Gupta explained how ‘GGM‘ came into existence. Working with the BBC, he had already identified Bhasker and Nitin Sawhney – the musician and composer. The pair had a stand-up show called ‘The Secret Asians’ and he knew Syal and Ghir from ‘The Real McCoy’. He persuaded his BBC boss to commission a pilot – a one-off show at the BBC’s Riverside Studios in Hammersmith, west London. The show was put together in just six days and was a success.

He decided to take it to Radio 4 instead, which produced it as a radio sketch show for a fraction of the TV costs and from there it was made into TV, after a couple of radio series.

The discussion was moderated by BBC broadcaster Samira Ahmed.

The panel discussion was proceeded by two random episodes of both ‘The Real McCoy’ and ‘GGM’.
www.asianculturevulture.com understands the BFI has filmed the panel discussion and it is expected to go out on the BFI Youtube channel. We will alert you to when it is available.