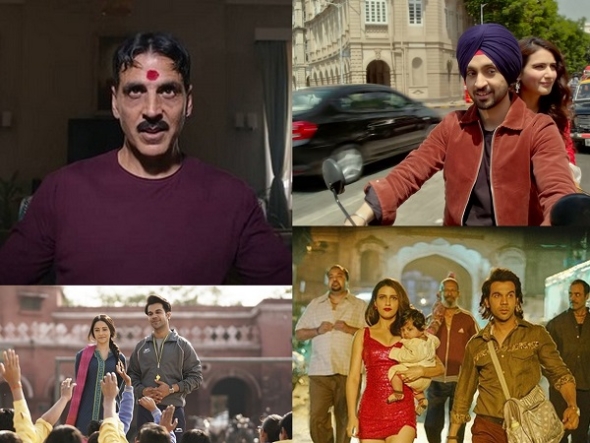 So, cinemas in the UK are shutting down again, but what is happening in India – in the largest film producing country in the world and that too in Diwali month when there are usually blockbuster cinema releases…our Mumbai Vulture picks over the bones…

I know there is a feeling of déjà vu in the air with the virus coming back to haunt millions in Europe, as was predicted by some scientists, in a second wave. And many parts of Europe are now in some form of lockdown.

On the other hand, we in India are experiencing a downward trend in the daily numbers of new cases. There is finally a sense of relief here after eight arduous months.

In Mumbai, things are reopening though at a snail’s pace.

‘There is talk of the city’s lifeline, the suburban train network starting soon, but no one’s talking about opening cinema halls here.

Over the weekend, the Mumbai government released its re-opening schedule for this month, and there is no mention of theatres in it. Hmph.

States such as West Bengal, Gujarat, Andhra Pradesh, Uttar Pradesh, Delhi, Haryana, Madhya Pradesh and Karnataka have allowed theatres to reopen, albeit only with 50 per cent capacity and a Standard Operating Procedure (SOP).

The picture for theatres or the industry in general looks bleak, at least in the short term.

In a survey conducted by Local Circles, a community social media platform, only seven per cent of respondents said that they would visit a theatre to watch a movie.

The numbers speak the truth.

On the first day of the re-opening, October 15, only one person attended a screening at a theatre in Chandigarh. One person – hardly a vote of confidence, despite covid safety measures.

A theatre in Delhi has been running afternoon shows with about a dozen viewers, who are mostly employees working in the mall where the cinema is located.

As per reports, West Bengal cinemas, which are showing Bengali movies, have the highest occupancy rate in India, a disappointing 30-40 per cent of capacity, whereas in other markets this rate is just five per cent or sometimes even lower.

Also, with production companies not committing to releasing new movies in theatres, many of the cinemas are screening old films such as ‘Tanhaji’ (the hit Bollywood Ajay Devgn-Saif Ali Khan film released in January) and ‘Thappad’ (Taapsee Pannu in socially committed director Anubhav Sinha’s film about domestic violence, released in February).

Reportedly, only about 10,000 to 15,000 people are visiting these movies on a daily basis – a fraction of those who would normally attend films nationwide.

This grim scenario is likely to continue till cinema halls get permission to reopen in Mumbai, which is a huge money spinner for movie houses.

So, while theatres continue to face an uncertain future and shed jobs, OTT (streaming) platforms are booming and making brisk business thanks to movie producers who don’t want to risk putting films in cinemas amidst this patchy and uncertain backdrop.

In fact, ‘83’ – the cricket film starring Ranveer Singh as iconic Indian cricketer Kapil Dev and the team lifting the 1983 World Cup and ‘Sooryavanshi’, an anti-terror film spin-off from the successful ‘Simmba’ cop franchise with Akshay Kumar and Katrina Kaif at the heart of the drama, are the only two movies that are scheduled for a theatrical release during Christmas and early 2021 respectively.

A slew of other films are set to release online as producers shy away from box office gambles.

The OTT line-up for the November includes ‘Laxmii’ – the name changed from the earlier ‘Laxmmi Bomb’ due to protests from right-wing Hindu groups and is about a ghost seeking vengeance. It is understood the film may screen in some theatres abroad where cinemas are open. It is dropping on Disney Hotstar Plus on November 9.

One film that was initially set to get a Diwali theatrical release was ‘Suraj Pe Mangal Bhari’ (‘The Sun is heavy on Mars’) starring Manoj Bajpayee, with Punjabi hit crooner and more recent Bollywood actor Diljit Dosanjh, appearing together in a 1990s caper about a wedding detective who does background checks. Recent word though is that this film too will end up on Zee 5 as it is Zee Studios film.

With these preceeding films all set to drop online, there is one offering that is attracting serious attention – it is not a film but does have a star at the centre of it.

It’s no secret that India is crazy about the Khans of Bollywood – Salman, Aamir, Shah Rukh, who have been away from the limelight since the lockdown.

But the ‘Bigg Boss 14’ reality TV show (India’s version of the now defunct UK ‘Big Brother’) hosted by Salman Khan started its annual run earlier last month, and viewers are surely not getting enough of him.

The actor is seen on the show at weekends. With no movies (this is where most people in India have a tryst with their demi-gods) releasing in theatres, and OTT still being a niche medium for many, ‘Bigg Boss’ is bound to have a run like never before.

Its closest competitor is not even another entertainment show or a blockbuster film – it’s the Indian Premier League (IPL) cricket.

Played across the UAE (because of the pandemic and maintaining strict covid safe protocols), the matches are screened daily at prime time evening peak viewing in India (and other parts of the world). The final league round of matches and semi-finals end this week and there is the final on the eve of Diwali itself on Tuesday, November 10.

Once this IPL season is complete, it will be ‘Bigg Boss 14’ host Khan, known popularly as ‘’Bhai’ (brother) who will continue to rule the roost for the remainder of the year. The series ends in January next.

Till next month, munch on popcorn at home (in the UK), seek out those online offerings and look out for the www.asianculturevutlure.com Bird Eye Review Show coming this week!

In fact, tell us which of one these you want us to review – there’s a spare spot going for the show which will drop later this week – subscribe and don’t miss!