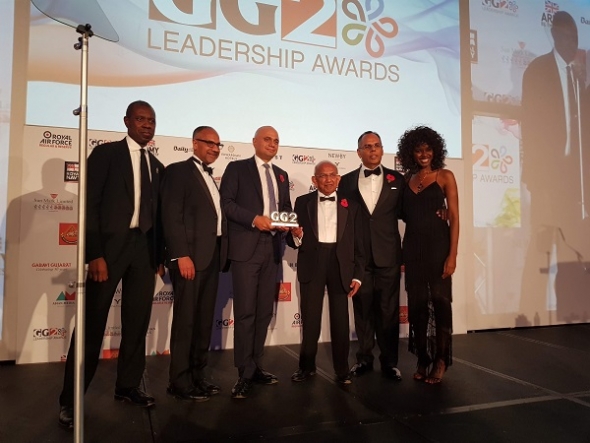 IT WAS a grand night of celebration of Asian achievement as Sajid Javid, the first non-white politician to hold one of the four great offices of state, won the Hammer award – the top accolade at the glittering GG2 Leadership Awards.

Javid, the present home secretary, is widely tipped to become the leader of the Conservative Party, should embattled Theresa May face a leadership contest and be ousted as prime minister.

Javid, the MP for Bromsgrove and who only entered parliament in 2010, was also named the country’s most powerful British Asian, toppling London Mayor Sadiq Khan who was no1 last year in this year’s GG2 Power List.

Javid said that he was often confused for his “good friend Sadiq Khan” and the compliment is returned.

In an interview with the GG2 Power List 2019, Khan said he was proud of Javid, Priti Patel and Sayeeda Warsi – all three are Conservative opponents who have served in government.

There was also a short tribute to the Solanki family – founder of the news magazine Garavi Gujarat (GG) and GG2- the English section. Ramniklal Solanki CBE was invited to the stage with wife Parvatiben and other members of the family, including sons Kalpesh and Shailesh, who run the Asian Media Group, responsible for publishing GG, and Eastern Eye, among other leading business to business titles and asscociated websites. Solanki senior started Gujarati language GG as an A4 fly-sheet and sold it out of the back of his car with his wife.

Among the other high-profile winners at the awards were David Lammy MP, who won the GG2 Editor’s Award, for his campaigning on the Windrush scandal.
The GG2 Media and Creative Arts Award went to Kwame Kwei-Armah OBE, the artistic director of the Young Vic Theatre in London. He was recognised for his contribution to the theatre. He was not present to collect his award.

Neil Basu, Metropolitan Police assistant commissioner, was awarded the GG2 Man of the Year Award. He is effectively the Met’s no3 officer, and is the public face of the force’s battle against terrorism as the senior officer in charge of counter terrorism in the country.

Imran Khan, the lawyer who so memorably represented the Lawrence Family in the Stephen Lawrence Inquiry and now represents some the families of the Grenfell fire victims, was presented with the GG2 outstanding achievement in law. He was appointed a QC earlier this year.

The GG2 Young Journalist of the Year Award went to Ellena Cruse of the Ilford Recorder.

June Sarpong was the compere at the dinner and awards ceremony last night at the Plaza, Westminister.

All the Gg2 winners present on the evening

Power couple Meera Syal and Sanjeev Bhaskar are among the highest climbers in the list – jumping from 22 to 14.
Riz Ahmed (5), Dev Patel (34) and Asif Kapadia (20) represent the British film industry.

Writer Vinay Patel (who has penned an episode of Dr Who and whose personal play, ‘An Adventure’ featured at The Bush Theatre in London) and presenter Jameela Jamil, are among the new entries; at 90 and 22, respectively.

Earlier in the day, GG2 hosted its second GG2 Diversity Conference, with a number of high level speakers, including minister David Lidington, talking about issues around advancement and fairness with regards to minority groups in the workplace.

More pictures and video to follow from the GG2 Leadership Awards itself – we have video interviews with Tasmin Lucia-Khan (TV presenter now based in Los Angeles and formerly of ITV), Mawaan Rizwan (performer and broadcaster) and Amrit Maghera (actress on her first Bollywood role).

Star presenter @Tasmin now Stateside tells us about her #USA #LA life and why she wanted to make a point of being at #GG2Awards #realpeople #realawards @GG2Diversity with @TheCraftCafe pic.twitter.com/LfIEDSUPAK

Comedian, broadcaster, writer @MawaanR on creating work and being persuaded he might be a leader of the future, and of the youth… #GG2Awards @GG2Diversity with @TheCraftCafe pic.twitter.com/ccsT9r25Na

Marking 50 years in #publishing – a remarkable achievement #RamniklalSolankiCBE an inspiration to us all… a special moment at the #GG2Awards @GG2Diversity helped solve a murder…empire on 3 continents now 👏👏👏 run now by sons @kalpeshsolanki @shaileshsol #AMG50 pic.twitter.com/0YvZ6w8KW4

Sailesh Ram, founder and editor of www.asianculturevulture.com was editor of Eastern Eye (2009-12) and worked for the Asian Media Group from 2002-12.

Privacy & Cookies: This site uses cookies. By continuing to use this website, you agree to their use.
To find out more, including how to control cookies, see here: Cookie Policy
← Sanya Malhotra on her role in ‘Shakuntala Devi’ biopic video interview and pictures… (Amazon Prime Friday, July 31)
AR Rahman – Hitting the high notes with ‘Dil Bechara’ album for Bollywood film →