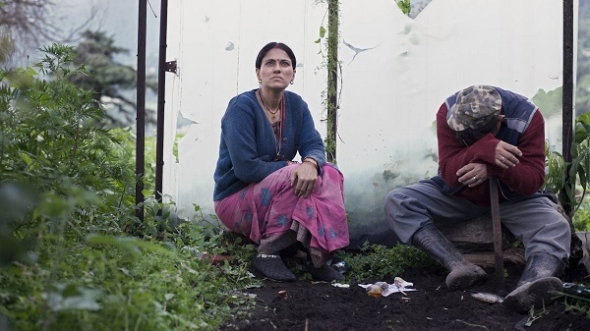 THIS is an intelligent, complex, and absorbing drama – beautifully depicting the cultural crossroads many non-urban communities face in India today.

Writer-director Ajitpal Singh should be commended for the way he has woven the pressures and fissures of modern-day consumerist India within a powerful traditional family dynamic – and as played out against the stunning backdrop of the Himalayas and a community negotiating much societal change.

His fine assembling of characters and drama makes ‘Fire in the Mountains’ very watchable and compelling as just so…and stops the film from falling too obviously into an issues led film or one spurred by a spirit of obvious activism.

This is more art, dealing with real issues in a way many would find entertaining, enlightening and thoughtful.

Singh gets great performances from all his actors, but perhaps special mention should go to his two leads, Vinamrata Rai (as Chandra) and Chandan Bisht (as Dharam), a married couple who have a son, Prakash (Mayank Singh Jaira) who is confined to a wheelchair and an older teenage daughter (Harshita Tewari) who is both bright and something of an extrovert.

Essentially, there is a conflict between husband and wife as to how they should tackle their son’s disability.

Chandra wants Prakash to undergo counselling and therapy – doctors maintain there is nothing physically wrong with the boy and that the issue is psychological.

However, Dharam is adamant that he can be cured by performing a traditional ceremony, known as ‘Jagar’.

Set in a tourist hotspot in the Himalayan range of Uttarakhand in Northern India and not far from Nepal, the predominant faith there is that of a form of traditional and more shamanistic type of Hinduism.

In the post screening Q&A, Singh referred to ‘Jagar’ as a form of black magic but refrained from criticising it – saying that it might indeed have benefits especially to those who believe in it strongly.

What is potent about Singh’s drama is that the family relationships are shown in their full complexity.

Dharam’s widowed sister continues to live with the family but it is clear that Chandra does not like her and there is tension as to who controls the household.

Dharam feels emasculated by his wife’s earning power – she hustles successfully to entice tourists to their lodgings and her efficiency and goodwill as a host is suitably rewarded.
Chandra’s goal is simple – to raise enough funds to pay for her son’s counselling.

Her husband clearly resents this and so too does the local (shamanistic) priest who is insistent that Jagar be done and the problem will be resolved.

Throw in issues with development – the need for a new road – and corruption, an elected official abusing his position – and teenage girls making short social media videos and enjoying the attention that it brings – are all powerfully injected underneath the central drama of how to get Prakash to walk.

Singh’s film is driven by a sense of inquiry and his own family experiences, he revealed in the Sundance Q&A.

The film is dedicated to his late sister who lived in the region and came up against issues of tradition and modernity over her own health.

This is an 83-minute film which covers a lot of ground and encapsulates many issues India is grappling with and deserves to be seen widely – and be applauded for its production values (it had multi-national talent working on it) and does so without making a clear stand for one thing against another. (Sailesh Ram)
ACV rating: **** (out of five)

Privacy & Cookies: This site uses cookies. By continuing to use this website, you agree to their use.
To find out more, including how to control cookies, see here: Cookie Policy
← ‘Child of the Divide’ – Actor & writer Sudha Bhuchar on her play and the line, ‘People should belong to each other and not to places’…
‘Bitched’ and Kali Talkback – six new performances to hit West End →