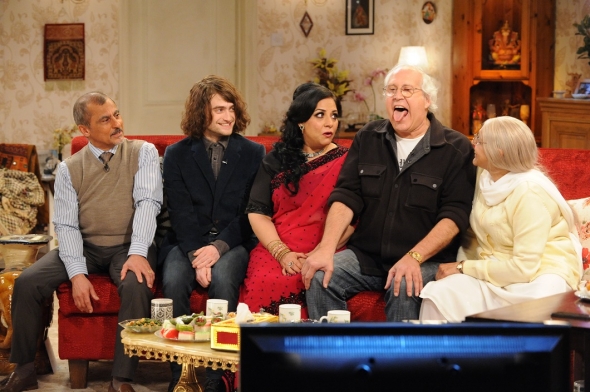 HE’S A FUNNY Asian man who lives with his parents in Hounslow, London.

Yeah, okay, we know there are a lot of them about – no offence, Hounslow.

But this one is different – for a start he has a TV chat show, getting famous people such as Daniel Radcliffe and Richard E Grant to talk to him and his even more madcap family.

“Any part these big names can play in kind of normalising us, if I can put it like that, is good,” reflected Sanjeev Bhaskar to www.asianculturevulture.com, talking about how ‘The Kumars’ were one of the first Asian families to be portrayed on mainstream television and given pride of place.

Bhaskar, who created the show, returns as the character, ‘Sanjeev Kumar’, in “The Kumars” on Sky 1 HD at 9pm on Wednesday (January 15). There are six new one-hour episodes to run.

It was more than seven years ago that The Kumars (“The Kumars at No.42”) left our screens on the BBC after proving to be quite a hit, garnering two Emmys in six years.

‘Sanjeev Kumar’ has predictably aged and so too has his family, granny Ummi (Meera Syal), Dad (Vincent Ebrahim), while Mum has been dispatched to India to help look after some rich relies and there’s a new character, Hawney (Harvey Virdi) – pronounced horny…she is… and very entertaining and funny she is too with it.

She plays the Kumars’ preening, if intellectually challenged, landlady, who hankers for a bit and any part going, as a thespian of dubious vintage (according to her tenants).

“There’s more tension in the house than there was before,” explained Bhaskar.

The Kumars, like many, have fallen on harder times, having to move from Wembley to Hounslow.

“They’ve come down a bit in the world. They were a comfortably off middle-class family and now they’re not quite so comfortably well off and have had to downsize,” continued Bhaskar. “It was a bit of an experiment to introduce a new character and there are avenues to be explored.”

Gone are the warehouses ‘The Kumars’ used to own, and in its place is a slightly tacky looking store above which they live in a flat now.

Sanjeev himself is divorced and has a seven year old daughter whom he no longer sees, as his ex-wife and child live in New York. She has gone there to work for UNICEF.

There’s quite an array of talent that is forced to share ‘Sanjeev’s’ woes and the sofa with Ummi, Dad and Hawney. Among those exchanging banter with Ummi are Chevy Chase, Ray Winstone, Elizabeth McGovern, Olivia Colman, Twiggy and The Queen (ergh…no, apparently, she’s just a fan, once asking Bhaskar questions about the old series with some insight), among others.

One of Bhaskar’s favourites in this run is Radcliffe, aka Harry Potter and very much an international film star in his own right now.

“All the guests are great and what was particularly exciting for me was Daniel Radcliffe,” said Bhaskar. “He’s such a huge star and still very young and he really played the game.

“I saw a different side to him that I’ve not seen on other talk shows. He was kind of playful and funny and you can see him thinking on his feet, he’s a very smart guy.”

Bhaskar also enjoyed the encounter with Terry Gilliam, a film director, who first carved out an entertainment career as one of the original members of the Monty Python comedy sketch team.

He appears alongside James Corden and Twiggy in the last episode which ACV saw being recorded live as part of the studio audience. Gilliam was in fine form but would have had the lawyers definitely twitching.*

“That stuff won’t make it,” said Bhaskar. “He’s 72 and still a maverick and that’s what I really love about him.”

One of the great features of the show is that ‘Sanjeev’ still asks quite obvious questions that other chat show hosts would not lower themselves, or dare, to ask.

“For me, always the dynamic was doing something different from other shows, where you could justifiably have a breadth of questions, from an old lady, a dad figure or a wannabe.”

He even managed to persuade Hollywood star Hugh Jackman to do a spoof ad for the local Asian publication the family and Hawney are all desperate to feature in – the “Punjabi Bugle”.

“He did it in a turban and it was a huge favour for us.”

Bhaskar also got the chance to share a desi music favourite on the show.

Singer Ash King and Bollywood dancers from Karan Singh Pangali’s academy give the show a brilliant send off in its final episode.

“It was great to support a desi (Ash),” said Bhaskar. “And he asked afterwards whether he could get onto mainstream TV in Britain, it was nice to have little moments like that.”

We’ve come virtually full circle; it’s great to have The Kumars back and Sky deserve applause for taking the plunge.

“We still don’t have that great a representation in terms of television – I am not doing a head count or anything,” said Bhaskar talking about the number of Asian faces on the telly.

“Speaking personally, I grew up at a time when it wasn’t fashionable to be Asian at all, and so I am always conscious of being proud of my roots and honest about them,” said the 40-something Bhaskar. “I craved seeing people in the mainstream that represented that part of me which was desi.”

Expect lots of thrills, spills and laughs and a great way to pass the midweek winter blues and perhaps we can look forward to ‘Sanjeev Kumar’ tackling Bollywood superstars in the next series.