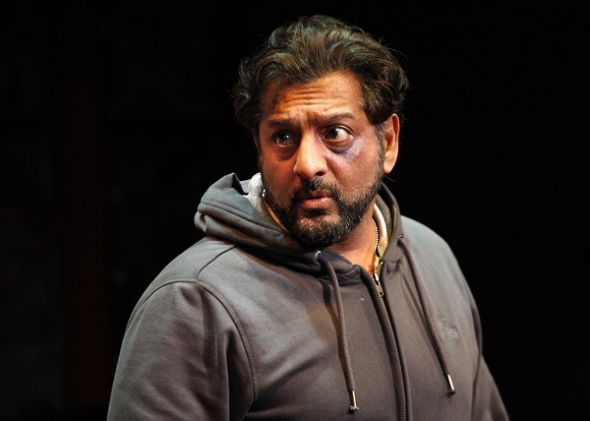 What makes good comedy? And is British humour special and different, asks the author of a funny and extremely thought-provoking new play…

‘END OF THE THE PIER’, directed by Hannah Price is a black comedy, about the nature of comedy.

‘Bobby’ (Les Dennis) is a comic who used to tell jokes but now he does panto. In his heyday 20 million viewers saw his double act, Chalk and Cheese. But, he told a racist joke, was outed by a Guardian journalist and paid the price.

As the play opens he’s at his Blackpool home, watching his son, ‘Michael “Mike” Armstrong’ (Blake Harrison from ‘The Inbetweeners’) do stand up comedy and can’t see the joke. But four million viewers don’t lie and his twitter following is immense.

Mike delivers a very powerful stand up at the start of the show which is being recorded for television and the audience, who are sitting in the front row, inadvertently end up participating. (The actors had a session with a stand up comedy coach, André Vincent, to give some authenticity to their performance).

The show which had its World Premiere at Park Theatre is by writer and broadcaster, Danny Robins and explores the nature of comedy and raises thought-provoking questions like what kind of humour is acceptable for comedic purposes? Does comedy need a victim to make it funny? Can you tell jokes about race?

Bobby is an old school comedian who’s done the working men’s clubs, been on telly and told jokes like… “I went to the doctor the other day, told him I was having strange dreams….what’s wrong with me?” and there is usually a punch line. Michael, on the other hand is a ‘modern’ comedian who makes fun of things like hating people who have no milk in the fridge, when they offer you tea and ask if they can use lemon instead, and performs what is known as ‘alternative’ or ‘observational comedy’, if you will.

But both men are united by the feeling that the comedy tradition is British and belongs to them, until one evening Michael goes for walk on pier sees an immigrant fishing and lashes out and is about to head for a fall.

Michael has a mixed race partner, ‘Jenna’ (Tala Gouveia), who is a very middle-class BBC comedy commissioner, and her idea of comedy is all about not causing offence. But, she can’t cope because there is no Prêt a Manger in Blackpool!

Nitin Ganatra, who is on stage for the first time in sixteen years, is Bangladeshi immigrant Mohammed, who’s come to confront Mike. At first, he’s the timid victim, then delivers a tour de force of a performance as a stand up whose comedy is raw, political, funny and true.

End of the PierNitin Ganatra

Privacy & Cookies: This site uses cookies. By continuing to use this website, you agree to their use.
To find out more, including how to control cookies, see here: Cookie Policy
← Zakir Hussain, tabla maestro, joins Symphony Orchestra of India on debut UK tour
UK Asian Film Festival: Revolutions of the mind as fest goes for films that seek inquiry and change →