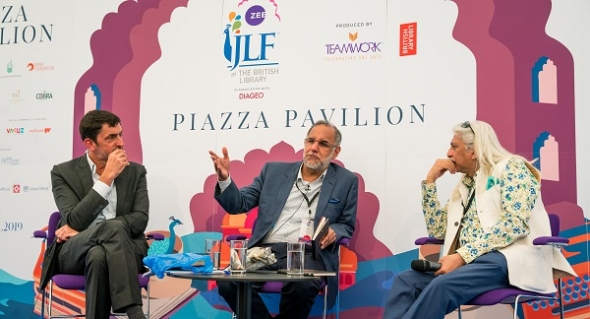 ONE OF THIS year’s undoubted themes at ZEEJLF at the British Library 2019 was debate around the Jallianwala Bagh massacre – as both India and Britain mark the 100th anniversary of one of the most infamous incidents of Empire.

It was on April 13 1919 that a peaceful crowd had gathered in a garden not far from The Golden Temple in Amritsar to mark the Sikh festival of Vaishakhi and listen to some speeches.

The British, in the form of the Raj, had passed a law banning assemblies and saw the crowd as seditious and posing a threat to British Indian troops and the order was given to fire on people in the garden – while official estimates put the number of dead at 379, some Indian sources cite a 1,000 killed and more than 1,500 injured.

On Sunday (June 16), Justin Rowlatt former BBC India correspondent and whose great-grandfather Sir Sidney Rowlatt was the architect of the repressive act which outlawed such gatherings, discussed the incident with Navdeep Suri, former India High Commissioner to the UK and whose grandfather was a famous Punjabi poet and narrowly escaped death at Jallianwala Bagh.

Suri’s grandfather who was 22 at the time, was knocked unconscious, while two of his friends perished. He wrote a poem, ‘Khooni Vaishakhi’ (‘Bloody Harvest’), which was banned by the Raj but resurfaced among family members considerably later.

Suri, now ambassador to the UAE, said his father read a reference to the poem in a publication which alluded to it in late 1979. After some detective work, he discovered the poem in its original form, and has translated it into English. The poem offers a rare witness account of what happened on that day.

The two shared their thoughts on the incident and what it meant for both countries – Rowlatt doesn’t believe there should be a formal apology – many in India still want one. Some in the UK worry this would lead to compensation claims and new legal wrangles.

Rowlatt argues it would be better for people in Britain to be more aware of colonialism – and that schools should take the lead.

“We don’t teach the people of Britain the real history of Empire,” he declared at the talk on Sunday (June 16).

On the day before – Anita Anand, broadcaster and author, explored the legacy of Jallianwala Bagh with Navtej Sarna, former diplomat and author, and Dr Kim Wagner, widely recognised as one of the world’s leading academics on the subject and author of the 2019 book, ‘Amritsar 1919: An Empire and the making of a massacre’.

Anand’s book, ‘The Patient Assassin’ explores the case of Udham Singh, who murdered British official Sir Michael o’Dwyer in revenge for Jallianwala Bagh in 1940. She also had family connections to the incident.

Her grandfather had been in the area but had gone on an errand and it had saved him – but he felt enormous guilt – he lost several friends in the shooting.

Her husband, Simon Singh, the journalist and Mathematician, had family who met Udham Singh when he was in Britain.

For Wagner, the crucial thing was that Punjab was under increasing surveillance and repression as a more ardent Indian nationalism began to take root. Many of those now swinging behind the cause of Independence in India, were soldiers who had returned from the front line in Europe, serving King and Country, during the First World War. They felt abandoned and were angered by the indifference of the Raj to their own predicament.

It was a recipe for trouble and Jallianwala Bagh was the culmination of that. Many in India see the seedlings of a mass movement for Independence emerging from its horrors.

*On a more personal note, my highlight was hearing Pico Iyer talking to Marie Brenner (author of a book on the celebrated recent war correspondent, Marie Colvin – ‘A Private War‘).

Iyer lost everything in a house fire in Santa Barbara, California over 30 years ago and it initiated a total rethink about the course of his life – and led to him Japan, where he got married, raised a family, and has been ever since.

He talked about a country with very particular traditions and customs and summed these up as,“life is about joyful participation in sorrows”. Much of the culture is about silences and what you can and can’t talk about, he elaborated.

Marcus Du Soutoy was fascinating about Artificial Intelligence and got the audience involved – and illustrated his talk with illustrations.

James Crabtree, former FT India correspondent, and author of ‘The Billionaire Raj’, talked about Indian elites and corruption in India – suggesting that once businesses got large enough, it was inevitable they would be drawn into politics – and corruption reared its head, whether entrepreneurs liked it or not.

The ZEEJLF heads to Belfast now, June 21-23 (click on the banner below for further details)

Pictures: Courtesy of ZEEJLF at British Library 2019 unless stated