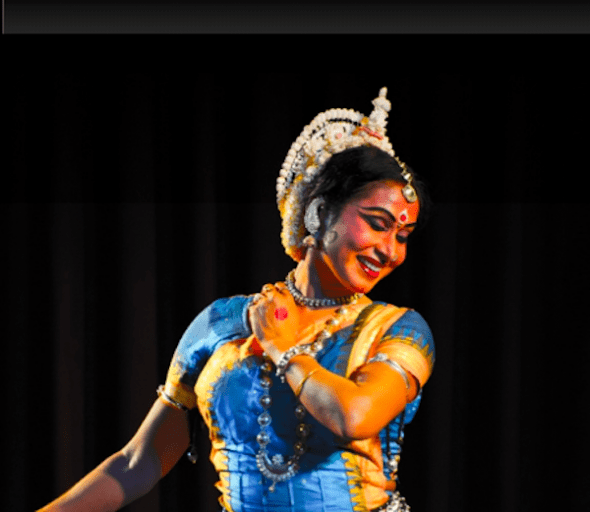 Two different classical forms and a gulf between them but in the hands and grace of the best, something else emerges and hints at the depths of the human psyche…

WE ALREADY warned you how special this year’s Darbar at Sadler’s Wells would be.

The curator himself Akram Khan told us personally why he opted for such an innovative dance programme, which concluded with an evening of Odissi and Kathak, performed by two iconic dancers.

Act 1, two solo Odissi dances performed by award-winning dancer Sujata Mohapatra commenced in pitch black. Atmospheric and eerie, the silence was finally broken by the sound of live percussion before the stage fell under the hypnotic spell of a wall of moving light bulbs.

Described by Akram Khan as a ‘temple of light’, layers and layers of light shone, dazzled, disappeared and re-emerged creating majestic archways, at times trapping the dancer and then forming a glowing backdrop for the performances.

Odissi dance is a deeply spiritual form comprising precise movements taken from the shapes and stances of temple carvings. The choreography features striking facial expressions and fluid stances that see the dancer create symmetrical and asymmetrical patterns with the body by bending and squatting; some of the moves look incredibly uncomfortable, but Mohapatra demonstrated them with ease.

Her main performance was the telling of a popular Hindu myth and she impressively acted out all manner of characters, human, spiritual and animal; many of which were incredibly believable.

The second act was devoted to Kathak and a four-piece performance by Gauri Diwakar consisting of four poems about the Hindu deity Krishna. Dressed in a vivid mustard yellow outfit her twirling moves teamed with flamenco style claps were both powerful and poetic.

The evening concluded with a mesmerising duet by both dancers, a vision of Khan’s that was a visual delight.

Seeing two such distinct styles complimenting each other with such harmony showed just how different the two art forms are, while reinforcing why they are so precious.

Privacy & Cookies: This site uses cookies. By continuing to use this website, you agree to their use.
To find out more, including how to control cookies, see here: Cookie Policy
← ‘Pinky Memsaab’ (interview): Director Shazia Khan on the expat life, friendship boundaries and transformations
UK Asian Film Festival 2019: ‘Evening Shadows’ (review) – Parents take centre stage in coming out drama… →