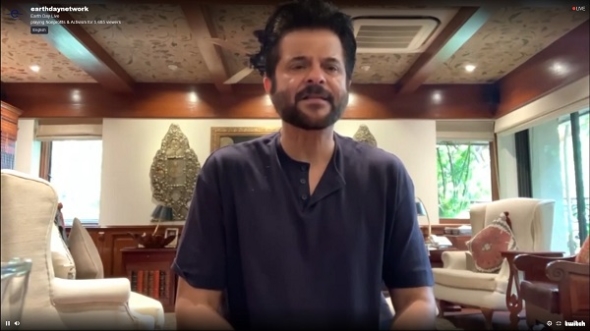 50th anniversary of Earth Day brings global voices together to mark and call for action on conservation and climate change, and Prince Harry in Dr Jane Goodall National Georgaphic documentary; Culture Declares Emergency also responds as UK creatives mark day devoted to preservation of our planet; and musician Soumik Datta adds his voice with a live digital concert this evening…

TODAY is the 50th anniversary of Earth Day and there are lots of online initiatives and ventures drawing attention to the plight of our planet and our current predicament viz-a-viz the Corona Virus Pandemic.

Bollywood (‘Mr India’) and international star (‘Slumdog Millionaire’) was among those lending their voice to taking care of our planet and changing our behaviour to help the earth heal and renew.

He spoke at about 3pm BST and was followed by an Indian Classical musical section, celebrating the late great Pandit Ravi Shankar. The broadcast continues with many voices around the world. You can continue to watch it here (April 22).

The initiative is described as the world’s largest civic event and is going digital for the first in its history, say organisers. Founded in the US, it is global network of activists and supporters campaigning for a better environment for all.

You can ask questions in real time, using the tag #EarthDayQA and connecting to the organisation’s social media handles.

Today (and depending on where you are in the world), a number of high profile speakers including the His Holiness Pope Francis, former US vice-president Al Gore, Indian child environmental activist, Licypriya Kangujam and Jamaican musician Ziggy Marley (son of Reggae icon, Bob), will present messages, perform and make calls for action.

Today also sees the screening of a two-hour documentary featuring Dr Jane Goodall who shot to prominence for her advocacy of the environment and her care of chimpanzees.

The film, entitled ‘Jane Goodall: The Hope’ is being shown to mark Earth Day and screens in the UK at 8pm on National Geographic and Nat Geo Wild. Now 86, Dr Goodall continues to argue for better a world where Conservation and taking care of the planet are put centre stage. She is focusing much of her attention on young people and those in the developing world. The documentary also features contributions from friend and fellow campaigner Prince Harry, the Duke of Sussex and other prominent Conservation experts.

Also active today is Letters to the Earth, another campaigning organisation which reaches into artistic and creative communities in the UK and launched last year as Culture Declares Emergency.

It is running Letters to the Earth Day right now and features a number of artists reading letters to the earth. Among these contributors are comedian and presenter, Hardeep Singh Kohli and actor, Sudha Bhuchar.

Earlier this year, musician Soumik Datta launched an extended EP, ‘Jangal’ and acv covered the launch – he has made the preservation of the world’s forests one of his key messages and posted today on Instagram, highlighting the plight of wildlife with a single track, ‘Tiger, Tiger‘.

He presents a live gig tonight at 6pm BST – you can watch it here – it will be the stringed sarod player’s first. He also performs as part of a collective of musicians playing a 24 hour live gig beginning on Midday (UK) on Friday (April 24) and organised by the PRS Foundation and in aid of the PRS Emergency Relief Fund. (See more on this story on our Listings Story coming out Apirl 22).

Privacy & Cookies: This site uses cookies. By continuing to use this website, you agree to their use.
To find out more, including how to control cookies, see here: Cookie Policy
← Abda Khan raises awareness of honour-based violence through her debut novel, ‘Stained’ and gives victims a voice
Sunny Pawar, ‘Lion’ actor, steals show at The Asian Awards 2017 (gallery pictures) →