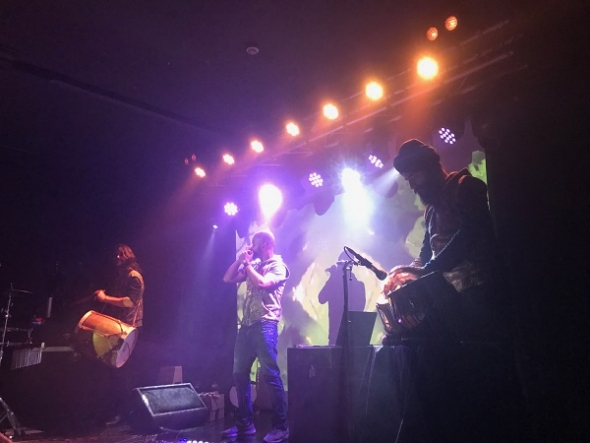 Bringing together a range of musicians and voices for change…

In highlighting the issue of climate change and the need to protect the world’s forests, the composer, TV presenter and sarod player, has brought together a range of musical styles and musicians to make ‘Jangal‘ (the original Urdu word for jungle).

He and filmmaker brother Souvid Datta have also made a narrative video of the title track and launched both at an event in East London.

As well some of those involved in making ‘Jangal‘, playing on the evening – there were also speeches about the need to act now to prevent further deforestation and climate change. There was also a contribution from a member of Extinction Rebellion’s Hackney branch.

On the night the live set was performed by Ayoze de Alejandro Lopez – on bombo (an Argentinian drum) and percussion; Gurdain Singh Rayatt on tabla; Datta on sarod, bamhum (a bamboo wood instrument), electronics and visuals – a background screen exhibited the video and other moving images.

It was an electrifying evening of performances.

Datta also said that ‘Jangal’ had been endorsed by Earth Day Network international, an established non-governmental organisation (NGO), as part of a forthcoming 50th anniversary event on April 20, 2020 – to create more awareness and mobilise people to defend the world’s environment.

Datta said: “As an artist, I have to believe that we have a duty to rage on, to create, against all odds, against resistance, to play and create. “I’ve never had the courage to make music in protest of anything before.

“But these melodies were raging in defiance, simmering under my skin for months on end, until I had to manifest them: songs that celebrate the jungles of our planet and the beasts that live within. A year later, here is this EP.”

The evening was supported by Saachi Sen, an emerging independent pop songwriter/singer, who did a solo acoustic set and performed some of her English songs, such as ‘Dark‘ on colourism within the Asian community and ‘Tethered‘ . She has a fine voice and proved popular with the audience. (See the link below for more).

The EP features Austrian percussionist Manu Delago on hang (related to steelpan instruments); London-based Al MacSween on piano, moog ( aform of synthesizer), other synths, harmonium; frequent Soumik collaborator and described as “rhythymic visionary” Bernhard Schimpelsberger on percussion; Ayoze de Alejandro Lopez on the Latin American bombo and Indian percussionist Pirashanna Thevarajah on the ghatam (a clay pot vessel with a narrow mouth) and morsing (crudely, an ancient mouth harp). The mixing and production of ‘Jangal’ is by Jonathan Rogers and is mastered by Streaky.

Datta’s three-part series for BBC 4, ‘Rythms of India‘ screened last year and he has also made a six-part series, ‘Tuning 2 you‘ about musical folk traditions in South Asia for Channel 4.

The ‘Jangal’ launch event took place at The Oslo Academy on December 15.

Privacy & Cookies: This site uses cookies. By continuing to use this website, you agree to their use.
To find out more, including how to control cookies, see here: Cookie Policy
← London Film Festival 2020 (1/2): Another Round (LFF audience winner); New Order, Siberia; Ultraviolence
London Film Festival 2020: ‘After Love’ – Dance of secret past and present make for compelling family saga… (review) →