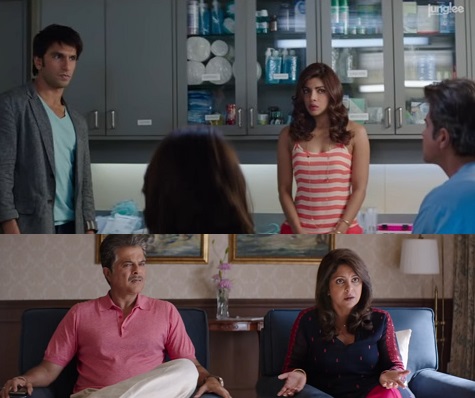 Perhaps her target is relatively easy – a stupendously wealthy Delhiite family throw a lavish 30th wedding anniversary party on a cruise liner between Greece and Turkey.

The characters might be slightly cliched but the dynamics and the dialogue – quite a notch above usual Bollywood fare – deliver a film of surprising bite and force, when you strip back the obvious comedy elements.

Screened at the BFI on Saturday (February 1) to celebrate Javed Akhtar’s 50 years in film, the versatile writer, whose words have graced film scripts, song lyrics and dialogue (both in this film), was set to introduce ‘Dil Dhadakne Do’ and later talk about the film and his long career in Indian cinema.

The screening also had a loose association to the BFI Musicals season which included the 1973 classic ‘Pakeezah’, and formally concluded last month. The Bollywood trio of Shankar Mahadevan, Eshaan Noorani, and Loy Mendosa are emblems of quality of film scores for many, and are better known simply, as Shankar-Eshaan-Loy.

Dog ‘Pluto’ is the main film narrator and voiced by Bollywood icon, Aamir Khan. It is neither wholly convincing nor terribly consistent, but really doesn’t matter because the film excels in a lot of other ways.

The film itself is something of a family affair with Javed’s daughter Zoya at the helm and son Farhan, both acting and assisting his father with the lyrics and the film dialogue.

Many have remarked on the very fine cast and some five years down the line – two performances really stand out and their careers have continued to blossom apace.

Ranveer Singh, as ‘Kabir Mehra’ is perfect as the spoilt rich kid who really isn’t cut out to inherit the family business and dreams of just flying.

The 25-year-old Kabir has his own recreational plane, but father Anil Kapoor (as ‘Kamal Mehra’) wants to sell it, because the business is basically insolvent, and he needs an injection of cash from anywhere to keep his family afloat.

Anuskha Sharma plays ‘Farah Ali’ a dancer on the cruise ship and the woman whom Kabir will romance. The first time we see her is in a Charleston-style dance number and it’s superbly done. She’s from Birmingham and a runway child so to speak, who is still following her dreams. Singh and Sharma are great together and wholly believable as a young couple who just fall in love – like you’re supposed to – without any of the outside encumbrances or family getting in the way!

Kapoor is ably supported by wife Shefali Shah (‘Neelam Mehra’ in the film) and their own marital issues play a big part in both how Kabir and sister ‘Ayesha’ (Priyanka Chopra) will manager their romantic decisions. In much of South Asian culture, it isn’t about two people falling in love, but two families coming together to form an alliance.

Chopra is very convincing, as the woman who seemingly has it all, but her soul and love life have been drained of magic and spark. She is independently wealthy, but from her own endeavours – in setting up a booming travel portal and she is uncomfortably married to the uppity ‘Manav’ (Rahul Bose).

At first, all looks okay there. Manav appears attentive and caring and clearly supports his wife as a loyal and committed husband is – but later, the mask slips spectacularly and we see what Ayesha has long suspected.

There are a number of sub-characters and sub-plots who – and which – will revolve around the above stars.

The first half is a little plodding, but it is in the second half that the film blazes and fizzles and covers a lot of social ground without ever looking like anything but a Bollywood masala film.

But back, front and centre is the great Indian family and the need for parents to control their children – however old or (in)capable they might be of living their own.

It is in many ways a great ensemble piece and representative of what Bollywood can deliver given the right ingredients, set up and production values – the glossy locales certainly help. Akhtar wrote the story with Reema Kagti, (a continuing and impressive contributor).

An inspired choice by the BFI and it was a shame Akhtar senior was not able to attend, as originally billed. A recent car accident in which his wife, the campaigning and crusading actor Shabana Azmi, was injured, meant understandably he was no longer able to travel to the UK. The BFI has indicated it will reschedule and the hope is that Aktar will be in London, some time in late June and early July.

Instead, Samir Bhamra, creative director of the UK Asian Film Festival, which hits screens late next month (and for which www.asianculturevulture.com is a media partner), introduced the film on Saturday.