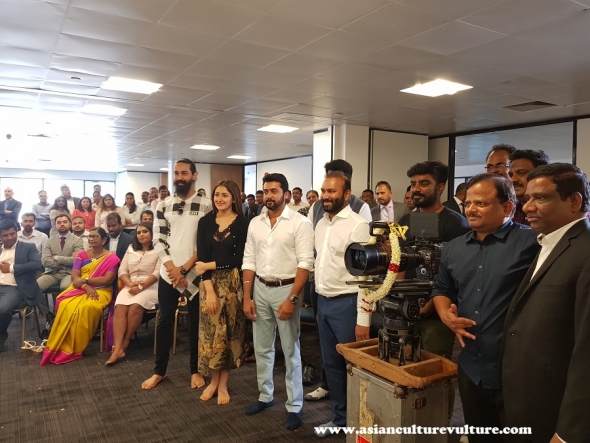 One of the hottest names in Tamil cinema, Suriya, was the centre of attention as production begins on a new film being produced by multi-media group Lyca…

ONE oF SOUTH India’s best-known film stars, Suriya, was in London to receive puja blessings for a new film announced in the capital by South Asian powerhouse producers Lyca on Monday (June 25).

Also present at the puja ceremony at the Lyca UK HQ in the City, close to Canary Wharf, were director KV Anand and star Ayyesha.

The film which has the working title, ‘Suriya37’ will see the star go up against one of the biggest names in all of South India cinema – Mohanlal – and Bollywood stalwart Boman Irani is set to feature too.

There is speculation that Mohanlal will play a negative character, while Suriya will be cast in the role of the hero.

The film is being partly shot in London and other foreign locations and will now be completed in South India.

On Monday, the makers were tight-lipped about the actual plotline and there was a feeling that more will only be revealed when they return to India.

Among the film’s talent is Harris Jeyraj as the composer and Abinandan Ramanujam as director of photography and Kiran, as production designer. All are well-established and much-sought after names in the South Indian film industry.

Lyca Productions is one of South Asia’s largest producers and distributors across the region. The film will be made in Malayalam and other South Indian languages, including Tamil and Telegu and there will be a Hindi version too – all set for 2019.

Later this year, Lyca Productions will release the eagerly anticipated ‘2.0’ starring South Indian megastar, Ranjinikanth who will play opposite one of Bollywood’s biggest names, Akshay Kumar.

Among the talent also for that film is Brit Amy Jackson. It will feature the music of Oscar winner AR Rahman. It has the largest budget of any India film production ever – at about £50m, eclipsing ‘Baahubhali’.

Allirajah Subaskaran, chairman of the Lyca Group, and the man who created Lyca Productions in 2014, said he was delighted to have secured the talent of Suriya, KV Anand and Harris Jeyraj for ‘Suriya37‘.

A puja is a Hindu religious ceremony seeking the blessings of the gods and is common when starting new ventures or enterprises. A camera was symbolically blessed as part of the ceremony and the stars were garlanded. See the Twitter video and the Facebook video for the short and impromptu press conference about the film.

For #SouthIndian #film fans and the curious among you… puja (Hindu ceremony) for film prod. launch – features stars #Suriya #sayyeshaa and others and incl #AllirajajSubaskaran chmn @LycaProductions #LycaGroup#Suriya37KickStarts
Story and press conf video to follow pic.twitter.com/nVDQ0zop1Q

Allirajah Subaskaran (centre in white shirt) participates in the puja

Privacy & Cookies: This site uses cookies. By continuing to use this website, you agree to their use.
To find out more, including how to control cookies, see here: Cookie Policy
← Books – our year in 2016 review – Good immigrants, Marlon James and diverse voices – more please…!
Tara Arts up for two awards in annual Stage Awards 2017 and star calls for colour-blind casting… →