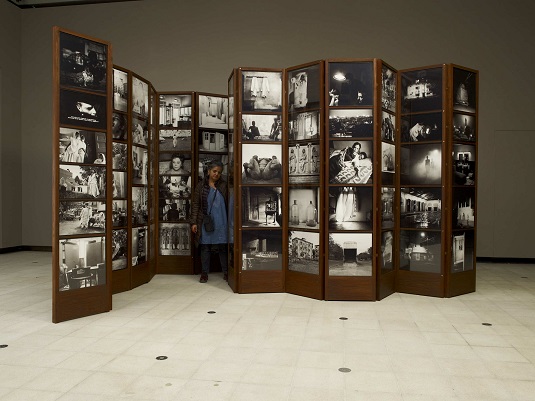 CONVINCING some folks photography is an art form can be tricky these days.

Its sheer ubiquity seems to absolve it of any higher leanings (after all, we almost all have a camera phone) – but sometimes you need to tease out meaning and form, and accept there are no obvious or simple answers.

It probably won’t come as any surprise then to learn that some of these questions are very much located in the work of Indian photographer, and photo essayist (if we can call her that), Dayanita Singh, an internationally renowned figure, highly regarded for innovation with the medium.

Her exhibition, ‘Go Away Closer’ at the Hayward Gallery, South Bank, opened last week and very much gives rise to the questions, what is the scope of art and how do we (and just who gets to) define it?

Questions celebrated artist and former Turner Prize winner Grayson Perry has been asking in his BBC Reith Lectures, delivered on Radio 4 this October (for link see below).

And so when does a photograph cease to become something as straightforward as a pictorial record and give cause to a higher intensity and emotion that we more naturally associate with the idea and concept of art?

This exhibition is a fascinating contribution to that question – and stimulating in the sense – that what you can give, it will give you back.

Singh seems to be asking all those questions and has been for a while, constructing books that are  both a combination of pictures and words and form stories that are themselves a collection of reflections, ideas and even, ‘fiction’.

For her, a single photograph loses something as much it gives – again, once you’ve taken the picture – whatever it is, moves on and loses its essence in the flow of time – even an object or a machine as Singh illustrates.

When you put such images together, they can form a different narrative altogether and become something quite different than what was represented in a single frame.

Back in the day, people used to have physical albums of pictures; these days they are mainly online but are rarely able to tell stories in the same way.

Singh makes you appreciate this by putting pictures together in a way that invites interpretation and the construction of your own narrative.

Singh’s mother started as a prolific amateur and it is how her daughter developed a love for photography.

It might be pertinent to say that photography was in no way thought of as a career for anyone with aspirations, more so if you were a woman, raised in the sub-continent.

Born in 1961 and inspired by India’s first lady of photography, Homai Vyarawalla, Singh defied prejudice to become a photographer.

There is quite a range of items on display in this exhibition and some of it has been newly conceived exclusively for the Hayward.

It is in some ways, a study of contrasts and split into two particular segments.

The first is the ‘portable musuems’ she constructs – these are wooden structures containing between 70 and 140 pictures.  They do not have any easily discernible themes, but can form a loose narrative.

In other words, it is itself part of a construction, partly real, partly imaginary, and possibly, even partly arbitrary.

There are many black and white shots and many clearly are from India and there is a unique sense of time and place and the pictures may evoke notions of nostalgia.

There are eight of these ‘museums’ in all, and Singh will rearrange the sequence within them and add new pictures to tell different stories and retellings.

Singh calls this ‘photo-architecture’ but there is something we feel of a ‘photo-sculpturing’ going on.

Like a sculptor, Singh’s creative editing and ordering of these pictures provides new shapes, meanings, and different stories; there is a sense of manipulation and recasting.

This part of the exhibition will be permanently installed at Vasant Vihar in New Delhi with an archivist-in-residence programme and will allow the artist to tell different stories with similar sets of pictures, once it leaves London.

This is the harder part of the exhibition, in that it isn’t by any means obvious what stories Singh is trying to tell.

Of course, that may be a very conscious decision but in some ways you are left with a more random collections of emotions, rather than a singular sense of attachment to the structures.

The other half of the exhibition follows a more conventional type of display, with various photographs standing in isolation and taken from her books.

There is also a three-minute plus film, entitled ‘Mona and Myself’ (2013), which Singh has described, “a moving still image – not video, not still photography, but something else”.

To the uninitiated, it’s still appears a video. Accompanied by Mona’s own favourite song, it’s an affectionate portrait of a person whose life probably exhibits none of the serenity of the film.

Her subject is Mona Ahmed, whom she first met as part of a photo-assignment she is reported to have rejected. Asked by the ‘London Times’, she was dispatched to take pictures of Delhi’s eunuchs in 1988. It was then that she befriended ‘Ahmed’ as he was known to his family, Mona to everyone else.

Mona’s story has been an enduring one for Singh and the subject of a book, ‘Myself Mona Ahmed’ (2001), which contain not just pictures but Mona’s own emails to the publishers about the nature of the project.

Singh clearly brings a sense of dignity and calm to Mona’s story, which appears predictably troubled and turbulent. Born without an easily identifiable sex, making her neither this or that, she is what she terms herself, the third sex.

There are also many pictures and exhibits of Singh’s other work, which while still being made of photographs, comprises postcards and pictorial essays.

Singh’s first book was of the famous tabla player, ‘Zakir Hussain’ (1987) and it was while travelling and taking pictures of him and his fellow musicians that she understood a dedication required to an art form and that “music, with it pauses and silences, has lessons, for photography”, she believed.

At £11 combined with the exhibition of American-Cuban sculpture-performance artist, Ana Mendieta, it’s tremendous value – and there is a lot here for anyone fascinated by that essential question of whether photography, because of its passive quality can (ever) really be art, and it’s all framed here in an Indian context.