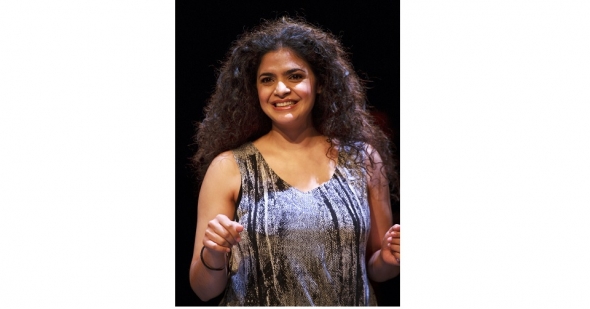 A play about race and politics in the acting profession, “Yellowface” takes centre stage in London this month and www.asianculturevulture.com’s Suman Bhuchar caught up with Davina Perera who has a leading role in it…

www.asianculturevulture.com(ACV): How did you get involved in “Yellowface“?

Davina Perera (DP): The producer (Kevin Shen) and associate director (Zachary James) had seen me playing the female lead in the West End production of “Privates On Parade” and called me in for an audition.

ACV: What is the show about?

DP: Yellow Face is a semi-autobiographical satirical play by Tony Award winning playwright David Henry Hwang (DHH), featuring himself as the main protagonist. It starts with protests about the casting of Jonathan Pryce in an Asian role in “Miss Saigon” and then DHH casting of a white actor by mistake in an Asian role. It is a dramatic comedy with farcical moments and a hugely dramatic twist at the end. We like to think it’s thought-provoking and at least leaves the viewer questioning what race really means.

ACV: I understand the playwright was here, what was his reaction?

DP: DHH was in for our opening night and he seemed to be just as pleased with our production as he was last year when we did it at the Park Theatre (in Finsbury). It’s always great to see him and he makes a huge effort to say hello and be involved in our process. I think it was a proud moment for him to have his play performed at the National Theatre. It’s an honour to perform his work.

ACV: How many characters do you play in this show? Which is your favourite?

DP: There are 88 characters in “Yellowface” and I play 21 of them, but my main two are Jane Krakowski (Hollywood star known for “Ally McBeal”, “30 Rock”) and Miles Newman (real life casting director for “Face Value” – the featured play within “YellowFace”). They are both comical characters who take themselves seriously.

ACV: Have you ever experienced the same problems being an ‘ethnic’ Asian actor?

DP: On stage it’s easier to get away with artistic license – I’ve even played Vietnamese! But mostly I have been very lucky in not being typecast. I have been cast in instances of ‘colour blind casting’ in shows, but I am acutely aware of the lack of colour blind casting and the under representation of people with an ethnic background in our industry. “YellowFace” is the epitome of colourblind (and gender blind) casting!

ACV: Tell us something about your background?

DP: I was born in Kent and spent ten years of my childhood in Melbourne, Australia before returning to the UK. I originally trained in musical theatre at the Royal Academy of Music (RAM) on a scholarship. Some of my West End credits include Yvette in the original production of “Miss Saigon” (not the original cast – I’m not that old!), Priya in the Andrew Lloyd Webber/AR Rahman production of “Bombay Dreams”, and Sylvia Morgan in “Privates On Parade” (She took over this role after the death of her friend, the actress Sophiya Haque).
I also created the role of Anita in the World Premier of “Wah! Wah! Girls” (Peacock Theatre for Sadler’s Wells),as well as appearing in “Britain’s Got Bhangra”. I was the first cover as Cathy and also Dance Captain in “Wuthering Heights” for Tamasha (Lyric Hammersmith).

ACV: You recently went to New York to perform the “Lost Musical” – what was that experience like?

DP: I recently played the role of Mrs Aouda in the Broadway production of “Around The World In Eighty Days”. That was an incredible and surreal experience and one for which I am truly grateful. The role was originally offered to my friend, actress and fellow RAM graduate Harveen Mann, who couldn’t do it due to a clash with work commitments, so it was a case of right place at the right time.
Bizarrely, while I was in New York my agent called to say I’d been called in for a different production of the same show happening later in the year outside London, which included a small scale tour of some venues in America. I wasn’t able to do it though as it clashed with my run at the National. You can’t beat performing it on Broadway, after all!

ACV: Can you talk a bit about raising money for cancer research and your friendship with Sophiya Haque?

DP: Sophiya was a good friend of mine for about ten years. We had been in four shows together, sharing a dressing room each time. She was the kind of person you had to meet to believe and I miss her every day. She was a truly magical performer and I was honoured to be in her last show with her and carry it on for her in her name (“Privates on Parade”).
On the one year of her passing, her best friend Dianne Pilkington (who was in the musical “The Far Pavilions” with Sophiya) arranged a small group of her closest friends, family and partner David White to raise a glass for her.
Last year I got a group of her friends and sisters together to do the Cancer Research Race For Life in Richmond and we raised over £2,000. It was a great fun day but also quite emotional. I still have video footage of her and our text communications that I read every so often. I am sure that wherever she is, she is still dancing.