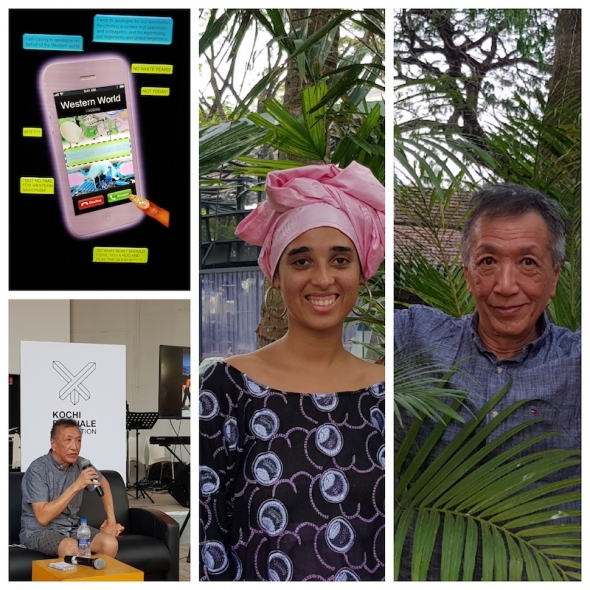 IF THERE is an artist at Kochi Muziris Biennale (KMB) who embodies curator Anita Dube’s dream of ‘a non-alienated existence’, then Tabita Rezaire would be high up in that reckoning.

Video artist Paul Wong is also someone who has long been in the field of subverting norms and prejudices. His long engagement with counter culture and the urge for minority expression has seen him emerge into the mainstream. Of Chinese origin, he lives and works primarily out of Vancouver, Canada. He was invited to talk at KMB and acv caught up with afterwards.

KMB is India’s largest contemporary art festival and acv was there last week – the exhbition itself is now entering its second week and will continue until March 29 2019. Both artists were at the festival for a short time last week.

Wong contrasted the situation between when he first started out and now – “performance artists recite poetry with their clothes on”, he quipped.

Aware of the pitfalls of being subsumed (neutralised some would argue) by the art establishment, his artist talk at KMB focused on Public/Private Lives.

His art is at once personal and much of it deals with uncomfortable subjects (for polite or conservative societies) – sexuality, secrets and migrant issues.

He talked to www.asianculturevulture.com about how he feels societies react to his more controversial and outspoken work.

But first – Tabita Rezaire – born in 1989, now residing in French Guyana, having grown up in Paris, and studied and worked in London, she says home for her is not about a geographical space.

Until earlier this year, she was based in Johannesburg, South Africa and moved back to the country of her father’s origins.

Rezaire describes herself as an ‘agent of healing’, and there is great energy, humour and power in her work.

Among the most arresting artwork of hers is that displaying mobile phone fascias, filled with feisty slogans, and demands for better treatment and respect for all. Called ‘Sorry for Real_Sorrow’, it is both playful and arresting.

For anyone using communication apps, it is immediately identifiable and her message is both stark and easy to comprehend.

Clearly opposed to power as it currently constituted between Man and Woman, East and West and Technology and Freedom, she makes us all ask questions about the nature of power relations and argues that a new form of colonialism has simply replaced the old one.

“I am on a mission,” she told acv on her first ever visit to India. “It’s about a feeling,” she told us describing her mobile phone artwork.

“The work came from a lot of anger and realising where the pain I was experiencing came from – and when I understood it – the social, political and economic scope of it was so wide and went back hundreds of years – it’s imprinted into our bodies because of colonialism.”

Her contention is that most of the world (if not quite all) is in thrall to technology in the face of the internet.

“We are all desperate for connection – how do we connect to ourselves, to each other, to the universe?

“We know only one way – through Facebook, Instagram and so on – that is a void and an empty form of connection.

“It (the internet) is an instrument of surveillance and control and an agenda for exploitation,” asserted Rezaire, whose mother is from Denmark.

When she was researching the subject, she was horrified to discover that the under sea fibre optic cables which connect the world through the internet were laid out along old colonial shipping routes.

“When colonialism began, they argued they were connecting to the New World, while actually exploiting the resources – free labour (slavery and other forms of servitude) and just expanding the wealth of Empire.

“Now what is happening with the Internet, is they say they are helping us to connect with each other – but we are all working for Facebook, Instagram for free.

“They are ‘stealing’ our resources which is our data in order to expand the wealth of their media empires.”

The recent world-wide furore over Facebook and illegal use of data on that site is a case in point. The company continues to argue that it is on the side of the indiviudal and protecting people’s data.

She accepts it isn’t all bad and that contained within the Internet are the tools to fight back.

“I don’t know which is best – occupying spaces, both physically and electronically.

“We can disseminate counter-narratives, claim a space for marginalised communities and occupy physical space too (as happened with Occupy Movement and bring to attention injustice and oppression).”

She appreciates it isn’t simple to disengage with modern communication completely.

She told acv, she’s been meaning to delete her Facebook account but can’t quite bring herself to do it.

Wong’s work also has a political dimension, though it isn’t as avert as Rezaire’s – at least not in the context of his presentation at KMB.

Much of his video work is very short form – one to two minutes, if that.

Longer projects include audio-visual work for Vancouver’s Opera Week, shown on large public screens; a gallery display of 40 TV screens showing all his work from the video app, Vine.

On a 50-day tour of India, and invited to work on a project with Indian students, it was his first visit too to the country.

Towards the end of his 40-minute talk, he spoke movingly of different times and discovering a close friend (Ken Fletcher) and artist colleague, dead.

“He had hung himself – he was my lover, I had a girlfriend, so did he – but there could be only one widow.

He is now visually documenting his mother’s letters – and how she moved from China to Canada.

When acv asked whether there was a greater openness and tolerance these days, he hesitated.

“I think we live in more conservative times. Big Brother is always watching, there is far more surveillance.

“I didn’t care then (about his artwork upsetting some). We just did it.”

His point is that when he started out, he didn’t have a huge audience but he made the art he wanted to and let others react – and it found an audience.

Today, he says he does what he wants, even though he knows some will disapprove.

His is a fascinating journey from the margins to the mainstream and you cannot help but feel it is because of artists like him, the scope and range of discussion is wider and more powerful.

Incidentally, the pavilion is named after the first European (Portuguese), Cabral, to set foot in the area and it is part of Aspinwall House, the large colonial warehouse, where many artists work can be seen and is the main hub of KMB.

On Tuesday (December 18), the pavilion was packed to see award-winning South African Indian band, Insurrections Ensemble. Performing in Kerala for the first time, it was a rousing evening – the band sing in a range of languages, including Malayalam, the state language of Kerala and bring together poets from India and South Africa. See these two short videos below…

Privacy & Cookies: This site uses cookies. By continuing to use this website, you agree to their use.
To find out more, including how to control cookies, see here: Cookie Policy
← Asian Media Awards 2016: Art Malik, Nitin Ganatra and Shelley King and upcoming names all spotlighted
Top India comic Vir Das entices Soho crowd with laughs and nudity…(don’t ask us!) →