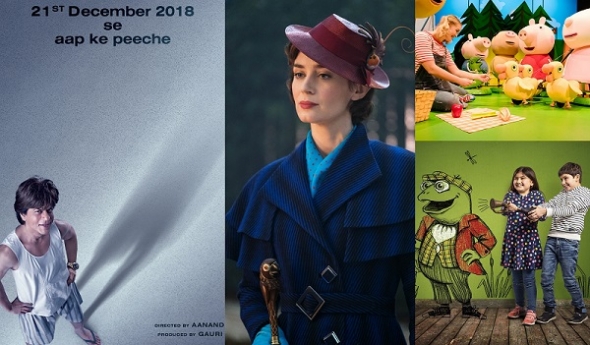 THE PRESENTS have been opened and the mince pies consumed.
What’s next over the holiday season?
There is a lot of entertainment around and www.asianculturevulture.com has picked a few – though other options are available.

One of the films which has divided critics and fans alike in India is ‘Zero’, the Christmas offering by director, Aanand L. Rai, featuring Bollywood superstar, Shah Rukh Khan, as ‘Bauaa Singh’, a vertically challenged man from Meerut (Uttar Pradesh, North India), in search of a suitable spouse.

Two women enter his life, one is ‘Babita Kumari’ (Katrina Kaif), a film star and the other is ‘Aafia Yusufzai Bhinder’ (Anouskha Sharma) a scientist who has cerebral palsy. Look out also for special appearances by the late Sridevi and megastar Salman Khan.

One of the film’s publicity posters totally gets in on the Panto season act as it features the lines “aap ke peeche” i.e. he’s behind you…

Samir Bhamra, artistic director of Phizzical Productions and the artistic director of the UK Asian Film Festival (March 29-April 7) is one of a handful of critics who see a lot more depth in the film. He, along with a few others, feels that the film is a metaphor for contemporary India and has been fulsome in his praise on Twitter.

Do please go and see it for yourself. Produced by Gauri Khan, Red Chillies Entertainment and Colour Yellow Productions, certificate 12a.

Perhaps Hollywood is more your thing, if so check out the ‘practically perfect’ musical fantasy, ‘Mary Poppins Returns’, featuring Emily Blunt as the lead.


It’s not a remake of the original ‘Mary Poppins’ (1964), but a sequel where the story is set in the 1930s and the Banks children are now grown up and widowed father, Michael (Ben Wishaw) has fallen on hard times.

Bert the chimney sweep is swapped for a cockney lamplighter, Jack (Lin-Manuel Miranda) and it is directed by Rob Marshall and features a stellar cast including an unrecognisable Meryl Streep and Colin Firth as a villain! Enough said.

Disney UK has made an effort with colour blind casting so look out too for performances by Sudha Bhuchar, Noma Dumezweni, and Kobna Holdbrook –Smith.

Audiences who have seen the original will spot the many references, but it doesn’t matter as there is a lot to enjoy in this film – such as the live action mixed with the hand drawn animation in the Royal Doulton Bowl sequence, or the lamplighters’ (leerie) choreographed dance sequence, ‘Trip a Little Light Fantastic’ and the poignant song, ‘The Place Where Lost things Go!’

Another popular character enjoyed by younger preschool viewers on television, is ‘Peppa Pig’ – the anthropomorphic female pig, along with her brother, George, friends Suzie Sheep, Pedro Pony, Zoe Zebra, and others have made a transition to the stage in ‘Peppa Pig’s Adventure’ at the Theatre Royal Haymarket, London.

Daisy, a young girl joins Peppa and friends at school and then they all go camping together, where they stay in a tent, go for a walk wearing their wellies to splash in the muddy puddles.

The premise of the show is sensory and participatory where the audience is invited to join in the singing, the ‘Bing Bong Song’ and invited to respond to questions like ‘Are you all friends with Peppa?’

It’s a safe and enjoyable show for younger children although the merchandise parents are encouraged to purchase can set you back a few bob or two!

I went with my niece and her mother and we bought a soft toy and a glow stick wand which has already broken!

Wind in the Willows

Directed by Roman Stefanski and designed by Liz Cooke and based on the novel by Kenneth Grahame, this play by Toby Hulse, follows the adventures of Ratty, Badger and Mole.

This tale of friendship and courage is brought to life by music and songs, at the Polka Theatre, Wimbledon.
Box Office: 0208 543 4888

Adults and Children £19.50 Conc. £13.50 show is running until February 17 with schools performances also available. Show is suitable for aged 5+
https://polkatheatre.com/event/thewindinthewillows/

Privacy & Cookies: This site uses cookies. By continuing to use this website, you agree to their use.
To find out more, including how to control cookies, see here: Cookie Policy
← South Indian films releasing this year – big budget action epics, stylish period pieces, history and British involvement…
Sundance 2021: Indian success for documentary about all women media team in ‘Writing with Fire’; Riz Ahmed ‘Flee’ also wins award; ‘Fire in the Mountains’ world premiere…(wrap and links) →