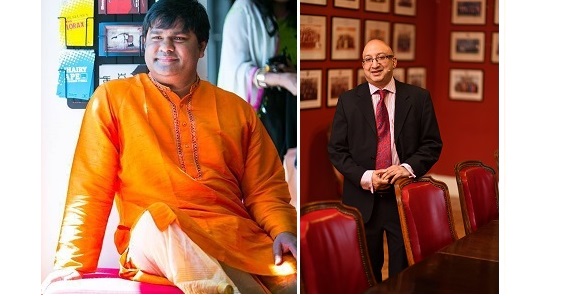 EDITOR and founder of www.asianculturevulture.com Sailesh Ram will be in conversation with the UK-based The Gronthee, a literary platform, next week.

Ram will be quizzed by Ahmed Kaysher, one of the senior figures from The Gronthee and the discussion will introduced by its editor and founder Shamim Shahan.

Kaysher will be known to acv readers also as one of he co-founders of Saudha, Society of Poetry and Indian Music (see below for more). The Gronthee means bridge and was founded in 1993.

Kaysher and Ram will be live on The Gronthee’s Facebook feed (see below for link) and are expected to talk about how and why www.asianculturevulture came into existence in 2013 and Ram’s career as a journalist, writer and entrepreneur.

Dedicated to high quality coverage of South Asian arts and culture, the site has particular strengths in film, theatre and covering Indian classical music and dance.

Last year Ram and the site covered five international film festivals – from Sundance, Cannes, Toronto, Goa (IFFI 50), and finally to Macau (IFFAM) and acv has a vibrant and growing Youtube channel, launching a new show in May, called the Bird Eye Review Show, alongside a Bollywood column – Bollywood asianculturevulture vibes earlier this year. It also covered the London Film Festival (see the Youtube channel) and Mami (the Mumbai Film Festival).

While the lockdown has presented a roster of challenges to its traditional coverage of film festivals and video output and a brake on its commercial operations in the way of traditional marketing and advertising support for other businesses and clients – and commissioned video work, the site continues to produce stories and remains active on social media platforms.

Last month, the site published pieces in relation to the Black Lives Matter movement, and covered stories about moves to shake-up both the Film & TV world and Britain’s media to make it more diverse and representative of the country as a whole.

It also launched its second episode of the Bird Eye Review Show, reported on renowned photographer Rankin’s portraits of two Asian doctors among the 12 taken to celebrate 72 years of the NHS, Women Make Film and its regular lockdown listings.

Ram has also had a novel for teenagers published – ‘Asian Triangle’ is an investigative thriller with a journalist at the heart of the action; it was shortlisted for a literary prize in Scotland and the book was on some school curricula, when it first came out some years ago. It was published under the author’s full name and the one he uses for his creative work, Sailesh Ramakrishnan. He has also co-written a feature film and penned the screenplay for this short film, ‘The Last Call‘.

Ram was editor of Eastern Eye, the popular weekly newspaper and is a contributing editor to the Asian Media Group’s (AMG) special publications. Prior to this, he was the editor of GG2Life, a glossy unisex lifestyle magazine and worked for AMG. He has had work published in the Independent and spent the early part of his career on East and several regional titles, after training as a journalist. He first freelanced after getting an MA in Continental Philosophy from the University of Sussex and a B.SC in Government and History from the LSE.

Kaysher helped to found Saudha, and has been instrumental in building its audience and reputation – it has held many successful concerts and events over the years and acv has covered. During the lockdown it has continued to produce Live Facebook conversations and concerts, drawing many viewers from around the world.

As well as being a folk singer and director of Bengali rural operas, Kaysher is also a writer who enjoys cinema, art, music and philosophy, among a few of his many cultural pursuits.

The Gronthee is an award-winning literary platform that publishes experimental work and helps new writers and has a strong Bengali influence.

Privacy & Cookies: This site uses cookies. By continuing to use this website, you agree to their use.
To find out more, including how to control cookies, see here: Cookie Policy
← Bird Bites: ‘A suitable boy’ stirrings; ‘Stephen’ – new ITV drama on Stephen Lawrence; and Bachchans Coronavirus vigil…
ACV Bird Eye Review Show – episode 3: ‘Breathe into the Shadows’, ‘Bulbbul’ and ‘Kadakh’; Bollywood news and more…(video) →