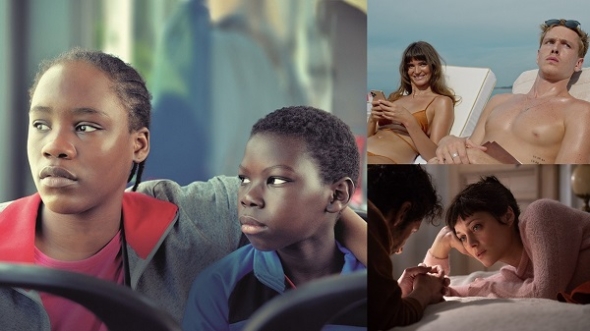 FRONTED by British talent, ‘Triangle of Sadness’ starts with huge promise, sort of loses its way in the middle but retains its power and charm by the last third.
A satire – it’s a fun film with something to say and bite, if you like your politics a little messy and fuzzy around the edges – director Ruben Östlund certainly has a good time with a range of characters who all appear to represent something larger than themselves.
It starts quite electrifyingly at a fashion audition shoot with Brit Carl (Harris Dickinson) trying to impress potential clients – one complains of his look and his “triangle of sadness”, pointing to his brow. This is someone who clearly isn’t in love with what he is doing. What he cares more about is his girlfriend and her manipulative ways – Yaya played by newcomer Charlbi Dean is beautiful, street smart and in the same line of work and has a ton of followers on Instagram, but their relationship is a little fragile – she isn’t someone used to paying her way. You think the film is going to be about them – it is and it isn’t.
They are paid to be on a cruise liner with fabulously rich people and a crew, that is there, above all, to please.
Ostlund makes fine use of Woody Harrelson, a degenerate drunk of a ship captain, fond of quoting Marx and not working. Zlatko Burić is hugely impressive as a Russian oligarch, Dmitry, (and has a lot of fun) and Dolly De Leon is marvellous as the Filipino Abigail in the last section.
There are too many characters once we are on the boat and the film’s lack of focus around the original couple leaves us a bit lost and uncertain.
When they get marooned on an island after a violent storm, the film seems to find its purpose again. Sit back, relax and enjoy the show, don’t worry too much about this or that, and perhaps that is how the Cannes competition jury came to hand this film the Palme d’Or. Surprising.
Acv rating: *** ¾ (out of five)

REFUGEES remain a thorny issue all over Europe and it is good to see filmmakers, as prominent as the Dardenne brothers, tackling it.
This is a bit of a tough watch but hugely rewarding and steeped in humanity and the power of the human spirit in adversity. And is a clear reminder that first and foremost human beings deserve to be treated as such and not political pawns in a game of power and manufactured hostility – surely that is the point of films such as this – where we are reminded of our essential humanity and general care for the welfare of humans just like us – regardless of where they come from or how they come to be in our orbit.
Set in Belgium, Lokita (Joely Mbundu) and Tori (Pablo Schils) are sister and brother from Africa… They are not really related – but their relationship certainly is one of familial bonds and concern. They look out for each other and Lokita as the older one is subject to more scrutiny and rules and it is what compromises their future plans together. They want simply to live as brother and sister, but it isn’t simple with their status being examined by the authorities.
Beautifully acted, and skilfully constructed, this is worth your time and reminds us that we should not be blinded by political rhetoric and devious plans to mostly dismiss those who seek safety and sanctuary as parasites of a sort. Sure, it is the industry around them that should be tackled, but greed and power reside everywhere, and humanity is often abandoned or seemingly reserved (in this country) really for white (Christian) refugees. Ummph.
Acv rating: ****

VERY French and perhaps more cerebral than it should be – this is about a brother and sister who can’t stand each other and it isn’t wholly clear why…
That it has Marion Cotillard as Alice, the sister, will help to sell it into English speaking markets but its essential Frenchness remains hard to shake – for good or ill.
The brother part is played by Melvil Poupaud as Louis.
There are clues of course to this strained relationship, a somewhat difficult upbringing and differing life trajectories – Alice is a successful actor and reasonably well-known without being hugely famous, while her brother has been a teacher and a poet but enjoys some success later in life with a book that leans somewhat on their family life and their feud.
Their elderly parents are slowly passing to the other side – a horrible accident sees them both seriously injured and prompts the reunion and with all this angst and bitterness, you imagine some reconciliation and resolution and even the spectre of something else – they do get into the same bed at one point (!). It is French, after all! But it isn’t like that – and does move the story forward in another way.
It’s interesting without really making you care enough. It’s not bad but it isn’t going to leave you thinking about your own sibling relationships that much – and that seems like a shame. Reasonable and if you emjoy French films generally, it might be more to your liking.
Acv rating:**

Other reviews from Cannes

‘All That Breathes’ (no review as such but covered as part of Sundance Film Festival 2022) – http://asianculturevulture.com/portfolios/sundance-2022-wrap-indian-documentary-all-that-breathes-wins-grand-jury-prize-child-of-empire-features-in-virtual-reality-strand/

Rocketry: The Nambi Effect – to come… (before July 1 its release date)