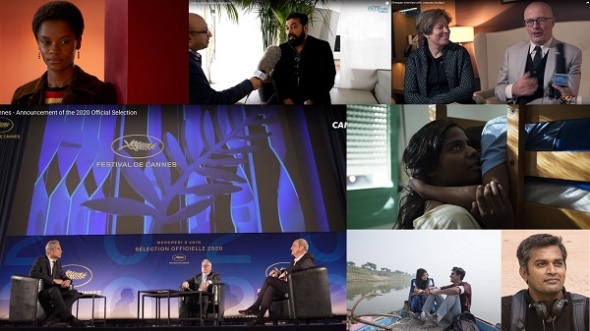 While the May film festival was scrapped, these films will all be able to carry the Cannes insignia…

IT WASN’T with the usual fanfare but yesterday evening, the Cannes Film Festival announced 56 films that would have featured at the world’s biggest and most glamourous film festival.

To an empty cinema in Paris – which normally would be packed with journalists – Thierry Frémaux, the festival’s director and president Pierre Lescure disclosed the selections and briefly discussed these choices with French broadcaster Canal + and its host.

Much of the film interest in Britain centred around Steve McQueen’s two films which got a Cannes nod.

‘Mangrove’ and ‘Lovers Rock’ are two feature length productions which are part of a larger BBC commission called ‘Small Axe’ and compromise five films in all. These dramas, which all centre around the black British experience, will hit BBC terrestrial and be free-to-air-in the UK this year, and have been snapped by Amazon Studios for the US (as co-producers) and the films will have theatrical releases as well, according to the BBC.

Also among the selections and of particular British interest is ‘Ammonite’ by Francis Lee. Starring Kate Winslet and Saorise Ronan, it is set in the 19th century Australia and about two women who fall in love. Lee enjoyed considerable critical acclaim with his ‘God’s own Country’ (2017), a drama about two male farm workers who find themselves falling for each other. One of the first time British directors to break through is Ben Sharrock with ‘Limbo’ about a Syrian refugee seeking ayslum and based on a Scottish island.

While some filmmakers have probably deferred their premieres till next year now, these films are expected to get theatrical releases before the Oscars next year. In France and some other parts of Europe, cinemas will be allowed to open from July 15 and Cannes has indicated that some of these films will now premiere at other film festivals and carry the Cannes stamp of approval.

Cannes has fared better on Diversity than gender Equality in recent years and because of its global nature and the ethnic diversity that comes with it, there is a decent quotient of films from different parts of the world, making it less white, and more about people from the margins than you might expect (see the full list with the link below).

There were no selections from South Asia in the announcements yesterday – that is a bit depressing, though not wholly surprising.

There was, however, some better news from the Critics Week (Semaine De La Critique) section of Cannes which announced its own mini-list today (June 4) and included British and Kent-raised Aleem Khan’s ‘After Love‘, supported by BBC Films and the British Film Institute (BFI). For more on Critics’ Week and the film itself, see here.

There are three other official selection categories: Competition, Uncertain Regard and Directors Fortnight (Quinzaine des Réalisateurs).

There is a sprinkling of Asian directors and South Koreans have been patronised by Cannes long before Bong Joon Ho took the top prize – the Palme d’Or last year (the first Korean film ever to do so) and then went onto to conquer the world and pick up the Oscar for Best Picture for ‘Parasite‘ and become the first ever non-English language film to win the top accolade. Incidentally, the last time a Palme d’Or winner also won an Oscar for Best Picture was in 1955 with ‘Marty’, a Hollywood film starring Ernest Borgnine and Betsy Blair in a goofy, romantic comedy.

The last Indian film to get an official selection garland was Nandita Das’ ‘Manto’ in 2018. As a former Cannes jury member and well-established actor, Das had a ready audience and ‘Manto’ had wide appeal – about a powerful and much admired writer who documented the misery and carnage that came with Partition in 1947, as the British departed and left behind the Raj.

Das had been at the festival in 2015 and told us about raising money for the film, ‘Manto’ back then. A solid, if slightly dryish treatment, it didn’t quite win over India – which increasingly has an appetite for films outside the traditional masala and chaat film is that make up Bollywood. Films like ‘Manto’ find a wider and more global audience online and it has hugely topical themes and well worth seeing, especially for Nawazuddin Siddiqui’s starring spot in the lead role as Saadat Hasan Manto.

As ACV’s Suman Bhuchar says in our Cannes 2020 Reflections film – he is an artist whose development Cannes itself has charted, when he arrived on the Croisette with the impressive Ashim Ahluwalia directed, ‘Miss Lovely’ which premiered in the prestigious Uncertain Regard section in 2012.

Setting aside ‘Manto’, it has been a while since India had any sort of presence at the Palais de Festivals, where all Competition, Red Carpet and special screenings, and Uncertain Regard category films are screened. The UCR films screen in the smaller 1,000 seater in the Palais. This is the high end of the festival – and the one with the most eyeballs, media attention, glitz and glamour.

Long gone are the days when in 2012, (and just before www.asianculturevulture.com was itself created), there were two films from India given official screenings – Anurag Kashyap’s gangster epic ‘Gangs of Wasseypur’ parts I & II got a double-bill screening at the Director’s Fortnight and Vasan Bala’s gritty ‘Peddlers’ also appeared that year in Critics’ Week.

The following year – ‘The Lunchbox’ (2013) which had some European money attached to it (always helps, especially if it is French) featured in Critics Week and ‘Monsoon Shootout’ got a coveted Midnight Screening, which is part of the official Cannes selection, that year too and was before www.asianculturevulture.com went live in August. ACV still remembers sitting in the stalls in the Grand Lumiere (the 2,300 seater) which hosts all the Official world premieres.

In 2013, Kayshap also had enjoyed a screening for his tough child trafficking drama, ‘Ugly’ in the Directors’ Fortnight section. The cult director also appeared at Cannes for ‘Raman Raghav 2.0’ (2016) in Directors’ Fortnight and along with powerhouse indie producer, Guneet Monga of Sikhya Entertainment, seemed to have the eye of Cannes’ film curators.

But the interest in Indian indie cinema which seemed well-established in 2010 with Vikramaditya Motwane’s ‘Udaan’ – which featured in the Uncertain Regard and was a return for Indian films after an absence of some years, appears to have tailed off.

French Director Jacques Audiard’s ‘Dheepan’ about a Sri Lankan Tamil refugee resettling on a deprived Parisian high-rise housing estate unexpectedly won the Palme d’Or and ‘Masaan’ from director Neeraj Ghaywan took the Fipresci Award (given by international film critics) and A Most Promising Prize for a debut feature aware presented by the jury for the Uncertain Regard section. Sadly, acv had left Cannes before these films screened at Cannes that year. Ghaywan directed the second season of Netflix’s ‘Sacred Games’ (2019).

Where there is European money and co-partnerships in producing independent films really helps; India also used to invest in the market or the Marche Du Film (which has online edition from June 22-26) more – it threw a hugely popular party in Cannes annually – often with 600 and more guests on one of the private beaches and served sumptuous buffet food – flying in chefs from India to make vegetable and non-vegetable biriyani. All this does count, however superficial it might appear, and may explain why there isn’t so much happening between Cannes and India these days.

Some would, also possibly, point to a change in the way the National Film Development Corporation (bit like the BFI in the UK) operates and with it, changes in personnel to India’s premier support organisation for independent cinema, has seen its own standing and influence wane somewhat in Cannes.

*ACV editor Sailesh Ram has attended the Cannes Film Festival since 2009 (when he was editor of Eastern Eye and attended in a personal capacity) and has continued covering the festival, following the foundation of www.asianculturevulture.com in 2013. Since 2015, acv has covered the Cannes Film Festival with video and had been planning to be in Cannes for the duration of the whole festival from May 12-23 this year – usually, the site is in Cannes for between five and eight days. See Ram’s interview marking 10 years at the festival with Shay Grewal on IGTV – link below…