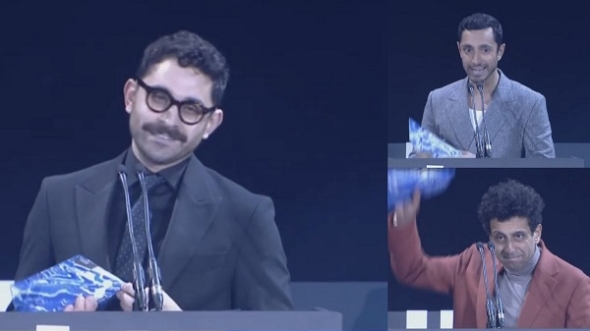 ALEEM KHAN and his first feature film ‘After Love’ proved to be the biggest winner at the British Independent Film Awards (BIFA) last night (Sunday, Decmber 5). It took six awards in all.

Adeel Akhtar won the Best Actor award for his role in the Bradford-set drama, ‘Ali & Ava’ which also won in the Music category. Akhtar praised writer-director Clio Barnard for choosing to make stories about people who were “traditionally overlooked” and “making the ordinary, extraordinary”. The film is about an Asian ex-DJ who falls in love with an older woman played by Claire Rushbrook and is about two people crossing both cultural and other barriers to find happiness. It premiered in the UK at the London Film Festival and will screen in the UK from March 4 next year.

Animated feature ‘Flee’ won the Best International Independent Film Award – with one of its executive producers – Riz Ahmed collecting the award and saying the film is hugely “relevant and resonant” to what is going on with the situation in Afghanistan and the ongoing global migrants’ crisis. A documentary, it narrates the remarkable story of a refugee Amin Nawabi (a pseudonym) who flees Afghanistan during the war, when the Taliban first took control of the country in the late 1980s, to his eventual settling down in Europe and the US and meeting his husband in Denmark. The film is made by friend and former radio journalist Danish-French director Jonas Poher Rasmussen based on the real life testimony of Nawabi.

Ahmed had been announced as the winner of the Richard Harris Award for Outstanding Contribution to British Film by an Actor on November 29.

But it is Khan’s film which has stolen all the headlines today – bagging awards for Best British Independent Film, Best Director, Best Screenplay, Best Actress for lead Joanna Scanlan, Best Supporting Actor for debutant Talid Ariss, and the Douglas Hickok Award for Director, with a debut film.

The film is centred around Mary – who discovers her Muslim husband of many years and Pakistani heritage, has another family across the Channel. After his sudden death, she goes in search of that family.
Khan, who is of mixed heritage, spoke to us about what inspired him to make ‘After Love’. (See http://asianculturevulture.com/portfolios/after-love-british-writer-directors-first-film-is-a-gem-and-explores-cultural-difference-and-family-ties/)
On the evenng, Khan said he was in awe of the other directors he had been nominated alongside – Philip Barantini (‘Boling Point’); Clio Barnard (‘Ali & Ava’); Sean Durkin (‘The Nest’) and Joanna Hogg (‘The Souvenir Part II’) and thanked his actors, crew, family and the Sundance Institute for helping with the script at the start of the process.
The film was released this year by the BFI which acquired its distribution for the UK & Ireland. Produced by BBC Films, it was originally selected to premiere at the Cannes Film Festival in 2020 – but that year the festival was cancelled due to the pandemic.

Akhtar has also spoken to us about his role in ‘Ali & Ava’ when it had its UK premiere at the London Film Festival in October. (See https://youtu.be/4-01JllkcKw)

And we covered the world premiere of ‘Flee’ at the Sundance Film Festival early this year. It also enjoyed screenings at London Film Festival in October. Ahmed through his company, Left Handed Films, helped to bring the tale to the screen and he is voicing the lead in an English language version. The original is in a multiplicity of languages and played with English subtitles at festivals.

The awards were compered by Asim Chaudhry, best known as Chabuddy G, the character in the BBC Comedy, ‘People Just Do Nothing’.
https://www.instagram.com/p/CXHAnR8qFpy/

For all the award winners, and reactions, please see either https://twitter.com/BIFA_film or https://www.instagram.com/bifa_film/

Privacy & Cookies: This site uses cookies. By continuing to use this website, you agree to their use.
To find out more, including how to control cookies, see here: Cookie Policy
← VJ Day – Troops who fought with Britain remembered, battles of Kohima and Imphal, talks about Indian contribution to the Second World War…
‘Churails’ director Asim Abbasi: Changing the narrative with this unique web series set in Karachi… →