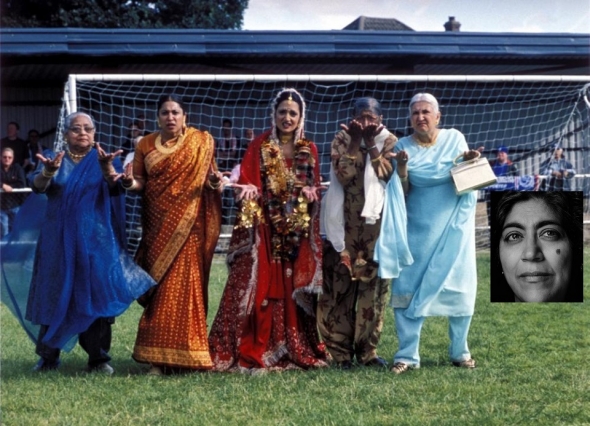 Chance to hear about the new and see ethnic classics…

*Meera Syal to talk about new stage version of “Anita and Me”.
*Gurinder Chadha will discuss new stage musical of “Bend it Like Beckham”
*Harvey Virdi (Hawney in “The Kumars” to chat about film work (“Honour”, “Brick Lane”)

SOME of Britain’s brightest Asian and most successful creative talents will help to mark and celebrate British Asian filmmaking this weekend and talk for the first time publically about new projects.

The first ever British Asian Film Festival gets underway on Friday evening (February 28) and over the course of three days, there will screenings and special talks.

On the opening evening, writer-actor Meera Syal will talk about the film adapted from her prize-winning novel, “Anita and Me”, which will be screened on the same night. She will also discuss how her book is going to be adapted for a stage play and how it might differ from the film.

Festivalgoers will also get a chance to see scenes from “Amar, Akbar and Tony”, a British Asian film loosely inspired by the Bollywood classic, “Amar, Akbar and Anthony” (1977), and hear from writer-director Atul Malhotra and members of the cast. Syal also has a part in this film.

Pravesh Kumar, artistic director of Rifco Arts, the organisation which has organised the festival, alongside Watford Palace Theatre, where the festival takes place, told www.asianculturevulture.com: “We want to encourage emerging new talent and this is another step towards artist development.

“We wanted to celebrate British Asian talent and we thought, why don’t we put on some really good British Asian films and talk to really successful pioneers, such as Meera Syal and Gurinder Chadha and look at their stories and see how they have achieved what they have.”

On the final day on Sunday, actor-writer Harvey Virdi, last seen in Sky’s, “The Kumars” will talk about her film roles.
She will be seen in the forthcoming “Honour” and will talk about a play she has written that will be staged by Rifco in the Autumn, as well as her role in the film version of the award-winning novel, “Brick Lane”.

Kumar said: “Harvey has written a play called, ‘Happy Birthday Sunita’ and it’s a British Punjabi play and a little bilingual – a comedy for all the family.

“So, while some of the films have been shown before, the artists will be talking about new work – and new avatars of their films.”

The festival hopes to bring together and inspire a new generation of filmmakers as, well as allowing people to enjoy films that have been in theatres before, but are back on the big screen again.

Kumar said: “We’re just dipping our toes. We think there is a hunger for this kind of thing, nobody’s really done it before, and why are we not talking about this and celebrating our film and theatre talent. There’s a crossover.”

He added that some of the actors in “Amar, Akbar and Tony” had been in Rifco’s stage productions as well.

Kumar, whose theatre outfit Rifco has been developing new talent for the stage, said the idea for the film festival had grown out of another initiative.

“We have been doing ‘Mummyji Presents’ annually and this is for new and emerging British Asian talent on stage and it’s a real fun night. It’s like Mummyji (Mummy) presenting things in her front room.”

A variety show of sorts – it has presented a rapper, beat boxer, poet, Bollywood dance troupe and Bhangra dancers.

“They not only get a chance to perform but talk as well about what they are doing,” explained Kumar.

Tickets are £6 a film, and £10 for Saturday and Sunday all-day passes.