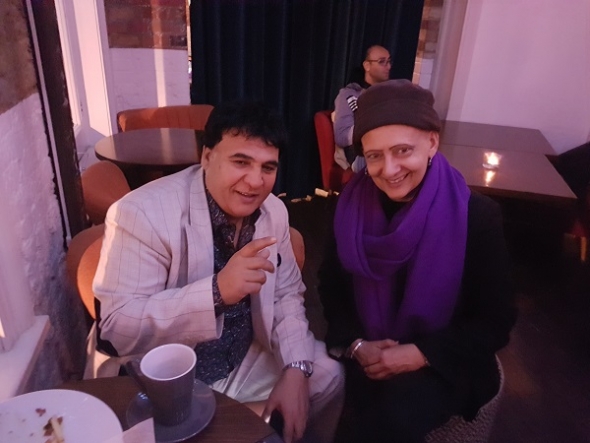 A documentary film about an unlikely filmmaker has travelled the world and won many plaudits. The man at the centre of it all was in London last week and a Hindustani speaker from www.asianculturevulture.com went to meet him…

PICTUREHOUSE cinema on a wet, gloomy and slightly frosty night in Piccadilly, London seems an unlikely venue to greet a cinematic hero from another continent but Salim Shaheen, the subject of French journalist Sonia Kronlund’s ‘The Prince of Nothingwood’ or ‘Nothingwood’ (as it is known in some countries) is just that.

Shaheen has a translator called, Wali with him but most of our conversation is in Hindi/Urdu which he can speak fluently and has picked up by watching countless Indian films.

He was recently in Mumbai for the Jio MAMI 19th Mumbai Film Festival where his film was shown and he said he met the Deol family there.

See him serenade one audience following a screening of the film there.

Shaheen has a lot of love for Indian cinema and culture, which is all due to the friendship of his father with Indian producer and distributor, Fakir Chand Mehra (and father of director, Umesh Mehra) who ran Eagle films.

Salim Shaheen is feted on state at the Picturehouse

Although his own father was totally against films and Shaheen said: “I fought with him and it is with great difficulty I came into the cinema.”

He tells www.asianculturevulture.com: “I was born in Kabul, I am approximately 50 years old, and I was 15 when I began in cinema and have been working for 35 years during which time I have made around 110 films. My father was wealthy, so I made my first film with his money. And I didn’t take any help from others.”

Today, he has a company based in Kabul and people are willing to help and support him as they consider him to a ‘Sultan of Cinema’ he explained. (A soubriquet given by the government of Afghanistan).

In fact, in the documentary, ‘The Prince of Nothingwood’ when they show clips of his films you realise that his work is very autobiographical and art does imitate life.

We see him sneaking off to the movies, being thrown out by the ushers and sneaking back in and his brothers beating him up for simply going to the cinema.

He loves everything about popular Indian cinema – every single thing is ‘zabardast’ (awesome or superb), he recounted, “the drama, the scenario, the playback singers, such as Lataji, Rafi, Kishore Kumar – Afghan people like Indian cinema – ‘Bacha bacha Urdu janta hai’ (‘Every child knows Urdu’ – a language they learn via cinema).

Despite his overwhelming affection for Bollywood superstar, Dharmendra, the signature song in the documentary, ‘Kaun Hai Jo Sapno Mein Away’ (‘Who is it that who entered my dream’). See below. This song is from a Rajendra Kumar and Saira Banu starrer called ‘Jhuk Gaya Aasman’ (1968, directed by Lekh Tandon) which he knows, but he adores the voice of ‘Rafi Sahib’ – the legendary playback singer, Mohammed Rafi.

He was introduced to director, Sonia Kronlund through another Afghan film-maker called Siddiq Barmak (writer /director of ‘Osama’) and as he puts in Afghanistan you either make films or you lay down your life. But for him life is cinema. “Making films in Afghanistan is like playing with your own head.”

It is difficult to make films in Afghanistan because the government doesn’t support the industry, while the Taliban leadership consider it ‘Kufr’ (forbidden in a religious sense), but Shaheen passionately believes that people can learn humanity through cinema.

“Cinema will help Afghanistan to become a peaceful place, and every child should get an education. We learn so much from films,” and he considers it to be ‘life learning’.

He would also like to be able to get more women in cinema by looking after their welfare. “My main stories are on women”, although his main actor is a man who plays a woman.

“It is very difficult for women, and hopes that they can get more independence.”

His latest film which was being shot while the documentary was being made is now complete and is called ‘Aihengar’ (excuse spelling), meaning ‘Ironsmith’.

In one of the scenes when he and his team are in Bamyan, Kronlund asks him how he feels upon seeing the gaps of the Buddha of Bamyan statues were: “These people are against culture, civilisation and humanity”.

Fans want to meet him in London

He is not sure of the impact of the film travelling to festivals such as Cannes, London Film Festival and garnering accolades.

“I am only a performer. My director knows how the film has turned out. My director, Soniaji is a good human and I thank her. She has made the film in Afghanistan in very difficult circumstances.”

As we pose to take photos together, I ask him about what his main message is.

“I want to say to the world that it is my wish that we have peace in Afghanistan, stop the bombing and give a pencil to every child (to be educated). If my country is peaceful than the the world is at peace.”

Later he gave a post show Q&A after his screening last Friday (December 15) and spoke with Clare Binns, director of programming and acquisitions at Picturehouse Cinemas and Picturehouse entertainment.

One of the things he said was he had difficulty getting a visa to stay for longer than a week.

“I wanted to see my own Afghan community and spend my New Year in this country”.

He went to Mumbai to get the visa which cost 200,000 Afghanis (around £2,148 approximately) and he hopes he can be supported to see the festivities in London over the holiday season. Let’s hope Santa grants his wish.