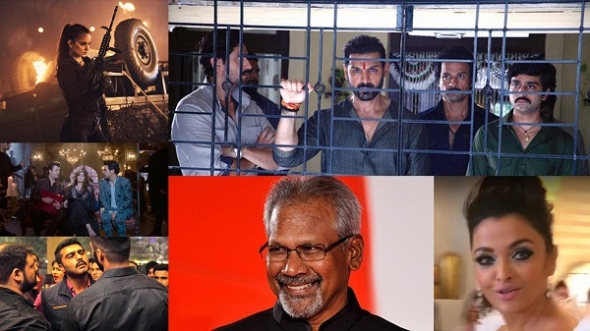 Things on a street level are looking suspect, again.

We seem to be heading back to where we were about a year back. As the world crawls back to recovery, India is slowing moving into the second wave of the pandemic.

In fact, Mumbai, the city of dreams, is leading the count in India right now. As another lockdown looms, there is a bout of uncertainty in the air.

On a more positive note though, the central government has permitted cinema halls to run to 100 per cent capacity but Mumbai’s government hasn’t done so (yet), though theatre owners are expecting positive news and are feeling more hopeful about the post-Covid period – vaccinations are taking place and cases in most parts were on the decline.

On this back of this growing optimism, producers and film companies have announced a slew of theatrical releases in anticipation – hoping to cash in on the much more relaxed environment for the movie halls.

But before we unspool this, let’s look at the releases coming up soon in March.

Janhvi Kapoor is back on the publicity trail – the daughter of the late Sridevi is aiming to fire up her fans with a film – and not just get them sharing Instagram posts – with ‘Roohi’. It is scheduled to hit cinemas on March 11.

Janhvi will go opposite Rajkummar Rao, whose transition from indie fave to masala Bollywood seems complete.

His fans may disagree – pointing out that ‘Chhalaang’ is much better than it might look if you just saw the trailer – our Nat certainly believes so. The film is about a ghost who abducts brides on their honeymoons. Mmm. Original.

Making a lot of noise on the street right now is ‘Mumbai Saga’ which will hit cinemas on March 19. This crime caper, directed by Sanjay Gupta, who specialises in the genre – ‘Shootout at Lokhandwala’ (2007), ‘Shootout at Wadala’ (2013), ‘Kaabil’ (2017) – sees a mouthwatering pairing for fans of Emraan Hashmi and John Abraham. The latter plays the gangster, while Hashmi is the law enforcer – it is an intriguing set up and aims to tell the story of how Bombay became Mumbai during the 1980s and 1990s, and what was happening both on the glittering surface and the dark underbelly. The film was scheduled to come out last summer but as with many releases in 2020, it got shelved. With a supporting cast that includes established genre stars Gulshan Grover and Suneil Shetty, among many others, it’s certainly got folks talking. The two main leads have been praising each other at publicity events – and the excitement is building and not just for their fans…Where’s the popcorn?

Going into battle on the same day is indie fave director Dibaker Bannerjee, now turning up the heat with a couple of Bollywood names, casting Arjun Kapoor and Parineeti Chopra in ‘Sandeep aur Pinky Faraar’ (‘Sandeep and Pinky are absconding’). Bannerjee made his name with indie smash ‘Love Sex Dhoka’ (2010), and whose most recent films have been in top Indian directors’ anthology segments in Netflix’s ‘Lust Stories’ (2018) and ‘Ghost Stories’ (2020). His latest film is billed as a black comedy – the two characters represent different worlds. Kapoor’s character is unsophisticated and rustic, while Parineeti’s is a go-getter shaped by the corporate world – and they hate each other but have to team up? Why? Has potential, you think?

Entering into cinemas on March 26 is ‘Koi Jaane Na’ starring Kunal Kapoor, a rising name and Amyra Dastur, another actor to look out for – not too much is known about this film which was also scheduled to release last year and includes a guest spot from Bollywood superstar Aamir Khan. He is a friend of director of Amin Hajee and a social media video of Khan and Swedish-Greek Mumbai-based one-time ‘Big Boss’ contestant, ElliAvrRam, who broke through in ‘Mickey Virus’ (2013) was leaked earlier this month. The film is described as a psychological thriller. Mmm. Could be worth a punt.

These are the films to look out for next month, but this period has seen so many titles get release dates as Covid restrictions mostly ease everywhere, we thought we should check in on some of the other films not releasing next month.

Four films of megastar Akshay Kumar’s were announced simultaneously – ‘Sooryavanshi’, ‘Bellbottom’ (shot in Scotland in the summer), ‘Atrangi Re’ and ‘Prithviraj’.

In fact, the sudden rush to announce the theatrical release dates of films, led top producer Ronnie Screwvala to tweet that the decision was “hysterical”.

The principle of one big Bollywood release on a Friday will no longer stand in this environment.
So, a clash of titans is inevitable, unless and until the dates are renegotiated later and that does happen.

Some of the biggest clashes of the year will be Akshay Kumar’s historical drama ‘Prithviraj’ Vs Shahid Kapur’s cricket saga ‘Jersey’ during Diwali, ‘Radhe: Your Most Wanted Bhai’ Vs ‘Satyamev Jayate 2’ during Eid, ‘KGF: Chapter 2’ Vs ‘Heropanti 2’, and Sanjay Leela Bhansali’s biographical drama ‘Gangubai Kathiawadi’ Vs ‘Radhe Shyam’.

Prepare for battles at the box office.

On the shooting trail…

Never much out of the news actor, Kangana Ranaut, tweeted behind the scenes of her next film ‘Dhaakad’ and so did co-star Arjun Rampal. The pair have just wrapped up in Bhopal, filming on the the Razneesh Razy Ghai production. It’s a spy thriller with underlying themes about abuse and trafficking.

After the mixed response to his ‘Coolie No1’ – Varun Dhawan is in Arunachal Pradesh to shoot for ‘Bhediya’. Set for a release in April, this is a comedy horror film with Dhawan all set to play a werewolf. Directed by Amar Kaushik it also features Kriti Sanon (‘Luka Chuppi’ 2019).

Bollywood icon Abhishek Bachchan is rehearsing lines at the Agra Central Jail for ‘Dasvi’, a social comedy from the same stable of filmmakers who made ‘Angrezi Medium’ (2020) and ‘Bala’ (2019). It also features ‘Kaabil’ star Yami Gautam and Nimrat Kaur best known in the West for her roles in ‘The Lunchbox’ (2014) and the hit global series, ‘Homeland’.

This is an adaptation from what many believe is one of the greatest works of Tamil literature, especially from the modern period. Written by the literary giant Kalki Krishnamurthy, the story first appeared in his own magazine ‘Kalki’ in the early 1950s. It tells the epic story of one of the great Indian Emperors – Rajaraja Chola I, who ruled much of Southern India and the Indian ocean in the 10th century. Filming has just completed at Ramoji Film City were lavish sets were created. The film is being backed by UK-based businessman Subaskaran Allirajah’s Chennai-headquartered Lyca Productions.

The Big B himself, Amitabh Bachchan, posted a picture on Instagram of his day at work, and star Ajay Devgn has also been shooting in Mumbai for the same, ‘May Day’.

And, perhaps arguably the biggest of them all, brining two superstars together, Salman Khan and Shah Rukh Khan together and now shooting for ‘Pathan’ in the city.

Many new projects have also just been announced as well since our last column.

Here’s what we know by way of announced releases…

Look out for more on these nearer the time, asianculturevultures! Till then, wishing you all a safe and happy time wherever you are in the world…

Subscribed to our monthly review show of the OTT (streaming space) in India, let Natalie Barrass take you on a journey…