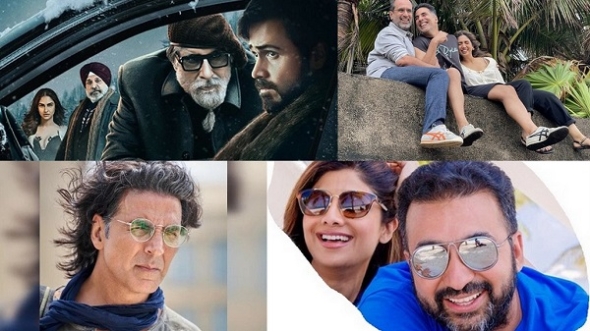 It’s raining hard a lot, but the pace of shooting has increased and the media pulse is definitely racing…

AFTER waging a war against covid in 2020, Mumbai is now battling a new enemy, the rains – though it should be quite temporary in nature.

Since, the beginning of Monsoon in mid-June, the downpour hasn’t stopped. And it’s now affecting everyday lives.

Flooding of rail tracks and roads are daily occurrences; people are learning to cope.

Strangely, the rains haven’t affected Bollywood, which is already reeling under huge losses due to covid as cinemas have not re-opened here.

Over the previous weekend (July 17-18), Akshay Kumar, or Aki as he is known by many fans, was shooting in the city’s suburbs of Thane for ‘Bachchan Pandey’, where a gangster aspires to be an actor.

Today (July 23), again on another rainy day, Akki was shooting inside a cinema hall in Andheri with 200 extras for the same film.

The shoot will continue through tomorrow (July 24) – post which Aki will start shooting for ‘Raksha Bandhan’, a movie about the bond between a brother and his sister.

For an actor, who’s currently got more money riding on him than any other film star in Bollywood, shooting in the middle of the monsoon just shows not only his enthusiasm and professionalism, but it’s also a sign of his resolve, to fight on despite the rather substantial setbacks.

We are talking about the much-anticipated 1980s spy caper shot in Glasgow, ‘Bell Bottom’, which was slated for a July 27 release, but has now been postponed as many states have rolled back lockdown restrictions in anticipation of a possible third wave of covid infections.

August 13 is now being suggested as a tentative release date when many cinemas should be open to business again.

Not many know that in Bollywood, mega stars, such as Aki have a bigger say in every aspect of a film they star in, including the release date.

So, unlike many other films, which opted for an OTT (digital/streaming) release, Aki has preferred to adopt a wait and watch policy for his films; in the last two years, theatres have opened and then shut depending on the level of covid cases in particular states in India.

‘Laxmii’, where he plays a Muslim man married to a Hindu girl, was released in November 2020 after several delays.

His ‘Sooryavanshi’, about Mumbai police trying to avert a terror strike on the city, has been waiting for the green light since March 2020.

‘Atrangi Re’, a cross cultural love story set between Bihar in North India and Madurai in the South, and produced by Aanand L Rai was completed in March; it’s now scheduled for an August 6 release.

Another of Rai’s production with Aki, ‘Raksha Bandhan’, started shooting in June. Producer Aditya Chopra’s ‘Prithviraj’, where Aki plays King Prithviraj Chauhan from the Chahamana dynasty (13th century and based in modern-day Rajasthan), is being shot since last year, and is slated for a November 5 release.

‘Ram Setu’, where Aki plays an archaeologist, started shooting in March this year. ‘OMG-Oh My God 2’, was supposed to start shooting this month, but has been now been postponed to September.

Finally, there is also an Amazon Prime Video series in the works too – ‘The End.’

This year, an amount of at least ₹600 Crores (£60 million) is lined up on only Aki’s films, which in all probability are waiting for cinemas to open up.

Many other films such as ‘Chehre’, ‘Thank God’, ‘83’, and ‘Attack’ all look set to release later in the year and a lot will depend on how many of these Aki films fare at the box office.

While a couple of hits will boost Bollywood’s sagging morale, flops will put a dampener on its fortunes.

On Monday (July 19), just as Mumbai was getting back to work, news started spreading that Kundra had been arrested and was helping police with inquiries into a pornography racket.

Any form of pornography is illegal in India from simply consuming or sharing links to any type of production – though there are such underground activities and x-rated legal sites in the West claim India is a significant source of traffic, third only behind the US and the UK.

In the February raid, the police found naked women and production staff and believe the group were supplying material to a popular app which was serving an India-based subscription list that operated like an OTT service.

It is also alleged that the women were coerced or pressurised into making such films and since media reports surfaced this week, more related allegations of intimidation of women has surfaced.

Kundra vehemently denies any involvement and his lawyer Abad Ponda claimed his arrest was illegal and said they would vigorously contest any accusation linked to such illegal activity.

Meanwhile, Shetty herself has lain low – she didn’t even show up on the sets of the reality show ‘Super Dancer Chapter 4’, where she is one of the judges.

Her return to film in ‘Hungama 2’ on Disney Hotstar has been overshadowed by this. Their sprawling property in Juhu was raided by police today and Kundra remains in custody till July 27.

An army of photographers and reporters remain stationed outside her Juhu bungalow, awaiting any further developments.

The story has gripped the city and has become far more of a potboiler than the recent Sushant Singh Rajput murder mystery, which did not amount to much in the end. It was just another sad and tragic suicide, much like others in India.

So, let’s set the ball rolling, and like Aki just wait and watch.