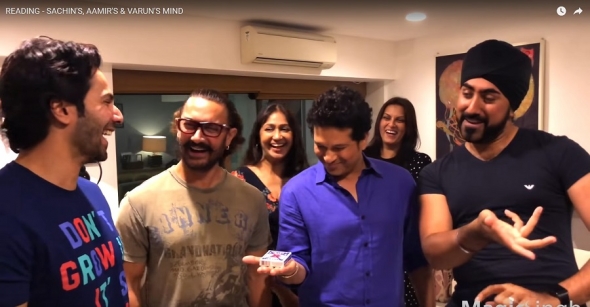 CONJURING up three massive Indian celebrities and having them eating out of your hands might well be a trick many magicians aspire to – but for British magician, ‘Magic Singh’ (Amardeep Singh Dhanjal), it was as real as they come.

And he has the Youtube video (see link below) to show for it too!

In Mumbai to perform at the engagement party for Akash Ambani and Shloka Mehta, he later entertained Aamir Khan, Bollywood superstar, Varun Dhawan, pin-up and emerging superstar, Sachin Tendulkar, cricketing legend and Ashutosh Gowariker, Oscar-nominated ‘Lagaan’ director with a few tricks at a private party hosted at Aamir’s temporary residence (as he renovates his house).

Singh told www.asianculturevulture.com: ‘I was star stuck to be honest, I don’t usually get star struck, I was like no pressure here…”

In the video, he performs a card trick and wows Dhawan, Khan and Tendulkar.

It was Aamir Khan who invited Magic Singh and his wife Pavandeep (of Pavan Henna) over to his place for a dinner after meeting the couple first on a Monday evening after he performed at the engagement party (June 30).

“We’re very friendly with star photographer Avinash Gowariker (brother of Ashutosh) and he had phoned us on Monday (July 2) and asked what we were doing.

“We didn’t have any big plans, we were just chilling at the hotel, the Four Seasons in Worli.

“‘Listen, Magic, come immediately to this address’ Avinash told us. ‘I’ve been raving about you for years to Aamir Khan and he really wants to meet you’.”

They arrived at the said residence to find Aamir Khan.

“It was quite amazing but quite a casual affair. We had drinks and food and I did a few tricks and things and they were blown away,” Singh reported. “They kept bringing us food like ice cream, it was really sweet.”

Khan asked what they were doing the next evening.

“We were free – and he told us to come back and he was going to invite some friends over.”

The next evening when they arrived, Khan hugged them and told the couple that a few people couldn’t make it – Shah Rukh Khan and Ranbir Kapoor had sent their apologies.

“Aamir started to say who was coming then Avinash said, ‘Don’t tell him’,” revealed Singh.

“But I did meet Fatima Shaikh (best known for her role alongside Aamir Khan in the smash ‘Dangal’.) I didn’t know who she was – I don’t really follow Bollywood,” confessed Singh. “I do know the main stars though – I’d seen Shah Rukh Khan go on stage after me at the Ambani engagement party.”

Aamir Khan told him that a certain cricketer had been invited too.

“We have been telling Sachin about you as well and he is coming with his wife and really looking forward to it.”

He admitted he didn’t recognise Varun Dhawan (who has nearly 10 million followers on Twitter) and is one of a new generation of stars emerging from Bollywood.

“He was really humble and he was excited about the magic. I got to meet Ashutosh too.

“I did a 30-minute show and they were all sat around, very comfortable and cozy.

“They really loved it, they’re not used to seeing the kind of magic I perform. They’re more used to seeing a cheezy guy with silk handkerchiefs and all that, I think. My magic is more like Derren Brown (probably Britain’s best-known illusionist and who had a very popular Channel 4 TV show) and can now be seen on Netflix.

“They were really wrapped up in it – almost like little kids. They were all so nice and welcoming and we were exchanging contacts. It was surreal and on another level.”

He almost has to pinch himself since he returned to London last week – but the video shows it really did occur.

“I was a bit disappointed I didn’t really get a chance to mingle at the engagement party. I was on quite early and I didn’t spot that many celebrities. I did see Ranveer Singh (another one of Bollywood’s leading men and boyfriend of Deepika Padukone).”

As soon as he had completed his set Singh was more or less whisked back to his hotel.

He is one of a privileged set to have been inside the Ambani family home – Antilia (named after a mythical island) and been invited to an engagement party which was itself one of the highlights of the Bollywood social calendar.

It was an absolute honour and pleasure to perform at Akash and Shloka’s Wedding Engagement in Mumbai at the home Antilia Tower! My Rock, my beautiful Wife and Glamorous Assistant @pavan_henna by my side ❤️ #shlokamehta#akashshlokaengagement#ambaniwedding#antilia#magician#ambanimagic

Antilia is 27 storeys high and a staff of 600 are said to work there and maintain it as the Ambani family residence. Its owner, Mukesh Ambani, is one of the world’s richest men with a fortune estimated to be about £35 billion. Reliance Industries, the company he controls, covers huge parts of the Indian economy from telecommunications to oil and gas.

Singh has a degree in TV and film production from Bournemouth University and started performing professionally when he was just 16 and is mostly self-taught and inspired by David Blaine, a US illusionist, magician and entertainer. Singh focuses on corporate and private clients who want him to entertain guests at weddings, birthday parties and events. He has performed for Dame Judi Dench, Craig David, Peter Andre, Simon Pegg, Amitabh Bachchan, Hrithik Roshan, among others in the past.