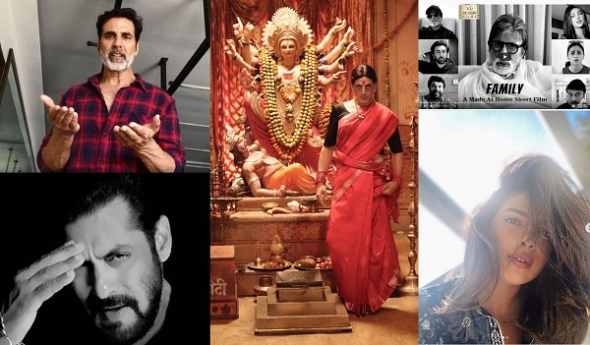 India’s nationwide lockdown is about to ease, small shops will re-open and the streets of Mumbai won’t be as empty as they have been, or will they…? Our City cineaste takes the city’s temperature…

IT’S SATURDAY (April 25) and India woke up to a new beginning, batti jali? (know what I mean?).

In today’s early hours (April 25), the government issued an order that said shops in the country could remain open with 50 per cent staff. This brought a huge relief to the average Indian, who has been facing a great deal just to buy his daily essentials.

We wonder if these are signs of happier times ahead or in other words the end of the nationwide lockdown on May 3.

Who caught all the Indian stars featuring on Earth Day (April 22)? The campaign group marked its 50th anniversary with a 15-hour long broadcast of people calling for the healing of our planet and halting further environmental damage around the world.

But surely, the biggest of them all, was Anil Kapoor’s plea to heal the world and fight climate change in the way Covid-19 has forced the globe to come together to fight this terrible disease.

While the lockdown is easing, there is no guarantee theatres and malls will re-open.

Last year, a report by Ernst and Young stated that the revenue generated by India’s cinema halls in 2018 stood at $1.4 billion, ‘ek number’ (too good). But achieving this target would be impossible as ‘Industriii’ (Bollywood) has already suffered losses to the tune of ₹1000 Crore (Cr), over £105m this year.

May Bollywood releases won’t be out on pre-scheduled dates.

Also, since getting dates for theatres will be difficult, many small films are likely to opt for OTT (Over The Top or online streaming) services to recover their costs.

There is no word on the many May releases and such Eid biggies; Prabhudeva’s Salman Khan dhaasu (Big Bang) offering ‘Radhey’ and Raghava Lawrence’s Akshay Kumar horror comedy ‘Laxmmi Bomb’ (May 22).

Movies that are still in the shooting stage face even grimmer prospects – as social (physical) distancing rules remain in force.

Another area of concern is cinema halls, which are already facing massive losses. Just a few days back, Akki (Akshay Kumar) is reported to have offered financial aid to one of the city’s ailing cinema chains. As far as Bollywood is concerned, Kumar has been in the forefront of efforts to raise money ‘sahi hai’ (that’s good).

He has shelled out ₹25 Cr (over £2.5m) for the PM CARES Fund. In the last few days, many other actors have been displaying their charitable side. Tamannaah Bhatia, through the NGO Letsallhelp, has donated 50 tonnes of food products for 10,000 people. Kangana Ranaut contributed ₹1Cr (£95,00) to the Film Employees Federation of South India’s Covid-19 efforts as well as to the daily wage workers of her film ‘Thalaivi’.

Shah Rukh Khan’s NGO, Meer Foundation has promised to supply 50,000 Personal Protective Equipment (PPE) kits to Maharashtra and West Bengal along with food to over 5,500 families for a month in Mumbai.

Most stars continue to post positive messages about tackling Covid-19 together and praising Indian health workers.

Akki is among the most active at this time he posted a new version of the song ‘Terri Mitti‘ from his film Kesari as a tribute to doctors and other health workers; and some like Amitabh Bachchan are reflecting nostalgically.

Many other actors such as Ranveer Singh, Deepika Padukone, Amitabh Bachchan, Sonam Kapoor, Katrina Kaif and Rajkummar Rao didn’t specify the amount they were donating to the Covid-19 fund. One of them was Priyanka Chopra, who tweeted that she along with husband Nick Jonas will contribute to 10 organisations.

Other than money, actors contributed in other forms as well. Bachchan Sr, Pee Cee, Diljit Dosanjh, Ranbir Kapoor, Alia Bhatt, Prosenjit Chatterjee along with Rajinikanth, Chiranjeevi, Shiva Rajkumar, Mallu (as in Malayalee film stars from Kerala), Mohanlal and Mammootty featured in a film titled ‘Family’, which sees the Big B lose his sunglasses and stresses the need to stay at home during the lockdown.

Privacy & Cookies: This site uses cookies. By continuing to use this website, you agree to their use.
To find out more, including how to control cookies, see here: Cookie Policy
← ‘The White Tiger’ – Priyanka Chopra Jonas, Rajkummar Rao and Adarsh Gourav are great and hope film will ‘open eyes’…
‘Industry’ – riveting new drama series follows graduate intake as they embark on cut and thrust of investment banking (preview) →