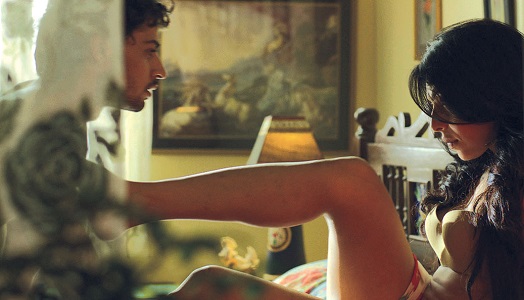 Delhi potboiler film too hot to handle or a sign of the times?

LOOSELY billed as India’s version of The Graduate, Ajay Bahl’s ‘BA Pass’ is far darker and much less compromising.

Don’t take your Aunty to it, (however liberal).

Shown in the UK at the London Indian Film Festival in July, it certainly raised eyebrows and temperatures.

While director Bahl makes the seduction of tender teenager, Mukesh, by the worldly and well-travelled Sarika (a hint of too many ‘foren’ ideas) entirely believable, sexy, and engaging, he offers no sense of salvation or redemption for the young buck.

While the general position of most Indian women remains deeply troubling, for a small elite, power and wealth give rise to opportunity and exploitation, where the fairer sex can crack the whip! (Quite literally).

Bahl’s noir instincts are strong and serve the film well, but once there is a shift in the tone from the heady and dangerous hedonism at the beginning, to the more prosaic and sordid arrangements that come with a ‘job’, it becomes a little predictable. But don’t let that put you off because this is still strong stuff for India.

Mukesh finds himself trapped, an object both of desire and contempt, with nowhere to hide. That he has responsibilities to his two young sisters, who continue to live in rural Punjab, only oppresses him further.

He has no friends, his Delhi family disown him, and he finds himself with little alternative to get by. The final sexual descent is a little extreme and over the top, but serves as a painful reminder of how far Mukesh has damaged himself, let alone anyone else.

And what emerges is a cry against a city, which Bahl suggests, is caught up in venality, deceit and deception, with no one you can trust and sex used a weapon in a battlefield between the strong and the weak (regardless of gender).

The emotional claustrophobia this engenders swallows the young and innocent, but only after it is way too late, suggests Bahl and writer, Ritesh Shah, who penned the screen version from a short story called ‘Railway Aunty’ by Mohan Sikka and published in an anthology, ‘Delhi Noir’.

Brave, honest and powerful for its depiction of mature female desire and power (a first in the Indian film context?), ‘BA Pass’ gives no quarter, takes no prisoners and ends explosively. It’s opened a lid but will the good denizens of Delhi really want to see what’s come spilling out…

Out now in India (from August 2)