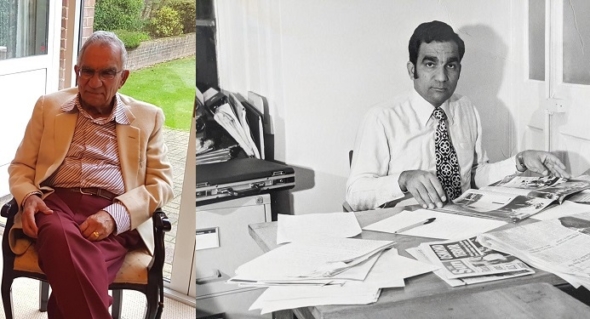 WARM and generous tributes have been paid to veteran journalist and BBC broadcaster Kailash Budhwar following his death a week ago. He was 88.

Many a remember an exceptional boss, a kind and humorous man, and a journalist who recruited widely – as head of the BBC Hindi service – and also acted and wrote poetry.

Mr Budhwar was born and brought up in Kanpur (about 50 miles south west of Lucknow in Uttar Pradesh state) and worked as a teacher, actor and writer at initially in Bombay at the Prithvi Theatre, alongside the legendary founder, actor/manager Prithviraj Kapoor – but Budhwar is best known as being the first Asian Indian person to head the BBC Hindi/Tamil and Afghan Section, from 1979-1992.

His daughter, actor and producer, Mamta Kaash said that her father had wanted to be an actor and he was President of the Allahabad University Union dramatic society, where he wrote and acted in plays.

“His parents were horrified at their son’s choice of occupation because they had wanted him to study law,” Kaash told www.asianculturevulture.com.

Mr Budhwar initially worked at All India Radio as an anchor newsreader but was recruited to join the BBC World Service in 1969 and he arrived in the UK for three years, but the contract soon became permanent.

During this time, the BBC Hindi Service was part of the BBC World Service and located at Bush House, in central London and it broadcast a daily programme for its listeners in India, South Asia and across the diaspora covering many world events, including the Bangladesh Liberation War (1971), the assassination of Prime Minister Indira Gandhi (1984), the death of Prime Minister of Pakistan Zia- Ul-Huq (1988) to name just a few.

“One of his more popular shows as ‘London Se Patar’ (‘Letter from London’), which is audiences writing to the BBC and their views being broadcast over the airwaves,” explained Kaash.

Naresh Kaushik, a senior BBC journalist, who came to the UK in 1981 to join the BBC Hindi team, after being recruited by Mr Budhwar told acv: “The reason why I worked at the BBC was because he opened the door to outsiders in the recruitment process.”

Kaushik explained that there was an all India competition for the jobs and he responded and was successful.

He said that Mr Budhwar’s main contribution was to introduce original Hindi journalism to the Hindi section, meaning that prior to that, the news was simply translated from English into Hindi and then broadcast.

Another person, who also arrived at the BBC and in the UK was Lalit Mohan Joshi – now an author and founder of South Asian Cinema Foundation – he was a senior journalist in the news team.

“I was selected through a written exam. Mr Budhwar had the idea to recruit people from different fields of journalism, academia and the arts.”

At that time, Joshi was a broadcaster and compere at All India Radio and he arrived and worked under Mr Budhwar from July 1988 until 1992 – when Mr Budhwar left, Joshi moved to different departments within the BBC.

“We worked on a rota system as we had three transmissions a day and a magazine programme once a week.

“All these were original programmes, and the listeners’ letters were immensely popular,” recalled Joshi.

Some of the stories he covered included the assassination of Rajiv Gandhi (1991), the demolition of the Babri Masjid (1992), and immolation of young students during the Mandal Commission protests (1990).

Joshi explained that Mr Budhwar and his team understood that the role of the BBC was to be impartial and people trusted the BBC.

It is said that even when Rajiv Gandhi was told about his mother Indira’s death, he asked to listen to the BBC, so it could be confirmed as accurate.

“As a boss, he was a totally different ball game. I was used to bosses in India and was deferential, but Mr Budhwar had a more laid-back style.”

He reminisced that after every transmission, Mr Budhwar would take his team down to the BBC canteen on the lower ground floor (of Bush House) where they would dissect the programme over tea and samosas.

“If you ever made a mistake in transmission, he wouldn’t berate you in front of other colleagues, but would take you aside and discuss it in private.

“He never hurt your self-esteem. That’s why he became so popular.”

This view is echoed by Lalita Ahmed, actor, presenter and translator who used to work at BBC World Service during the early days alongside Mr Budhwar, but knew him from India.

“I studied in Lucknow University when he was in Kanpur. We met properly when he came to join the BBC as I was a contributor there. We worked together on a lot of dramas and news.”

She said that Mr Budhwar wrote scripts for short dramas which they did on the radio and remembers him as a generous and kind boss.

“He never insulted you, but would take you aside and explain how it’s done. He was always helping other people and never had a bad word for anyone.”

Ahmed went on to say that after many of the Indian staff retired and left the BBC they set up a travel group and went on a lot of cruises around the world, travelling to the Caribbean, Artic, Antarctica , America and other destinations.

“He was a brother, a mentor and a great poet. He would take his book out, and we would all sit and listen to him,” she recounted.

Over time, he was the only man accompanying the many women (who became widows) and as most cruises have many Indian and Goan staff – he got used to be teased being called “Lord Krishna surrounded by his Gopis (cow herd girls)”.

“He had a marvellous sense of humour and it is such a loss for all of us.”

After he left the BBC, Mr Budhwar was a commentator and advisor on South Asian affairs and also shared his political expertise for some background knowledge with the cast of the famous ‘East is East’, when it was revived more recently at Trafalgar Studios in 2014.

Mr Budhwar was also part of the Indian Journalists Association (IJA) in the UK and a stalwart at many of their events.

Rupanjana Dutta, president of IJA, paid tribute, saying: “Mr Budhwar was one of the most prominent and senior members of the Indian Journalists’ Association (UK) and regarded as a beacon of knowledge. It is a great loss for the IJA today.”

Mr Budhwar passed away at Northwick Park hospital surrounded by his family.

He is survived by his wife, Vinodini, his daughters, Archana, Mamta and Dhun and son, Abhinay.

Pictures: All courtesy and ©of Mr Budhwar’s family – please do not reproduce without prior permission