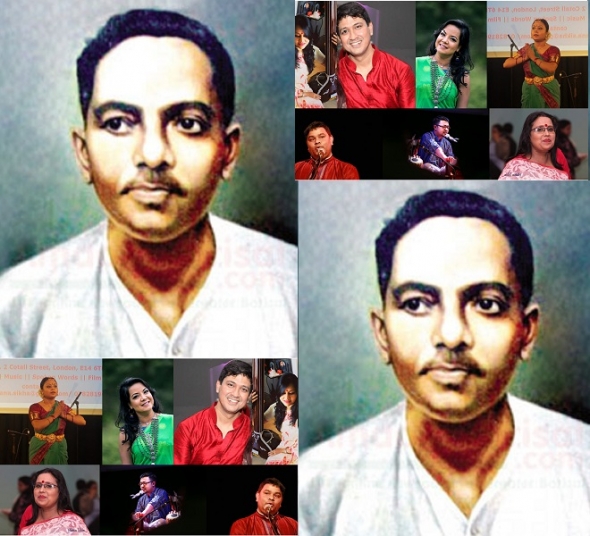 ‘At day’s end, like hush of dew
Comes evening. A hawk wipes the scent of sunlight from its wings.’
Jibanananda Das

RABINDRANATH TAGORE is like a mighty oak in world, Indian and Bengali literature but he shouldn’t be the only figure of reverence or inspiration from Bengal, believes Ahmed Kaysher.

The co-founder and director of Saudha, Society of Poetry and Indian music, believes Jibanananda Das, who lived for more than one half of the last century (1899-1954) deserves attention and it is about time that Jibanananda emerged from the long shade of Tagore’s towering oak – among all lovers of words and poetry.

So much, so that Saudha will mark the 121st birthday anniversary of Jibanananda with a special event of readings, talks, music and dance on Sunday (February 23) at Rich Mix in Shoreditch, East London.

Kaysher is a Bengali poet and philosopher himself – who has helped to put the programme together. He is keen for people to show that Bengali poets other than Tagore also excelled and brought something magical and compelling to the rich art and culture of the region and that its riches should be available to all, Bengali or not.

Kaysher, a professional librarian told www.asianculturevulture.com: “Bengali literature, specially poetry is so rich, so powerful and it really culminated its best point during a post Tagorian time.”

He remembers first coming across Jibanananda’s poetry when he was just 12 and then being reignited by it at 16 – some 20 years ago, when he first started writing himself.

“Jibanananda’s hypnotic verses and new way of weaving texts seduced – and most essentially influenced almost all major poets of Bengal after him.

“They found it really hard to develop their own voice for a long time, and for a while in my understanding, they were, in fact, entirely submerged in Jibanananda’s style, structure and even content.”

Jibanananda is probably the most widely read Bengali poet after Tagore and Kazi Nazrul Islam (1899-1976, also known just as Nazrul) – two of the greatest and best known poets.

Jibanananda was an able student, acquiring a degree in English Literature from Presidency College, Kolkata and then gaining his MA from Calcutta University. In his lifetime, only seven volumes of poetry were published but he penned 21 novels and 108 short stories and much of this only came to light following his rather sudden death.

Born into a middle-class family, his father was a schoolmaster and something of a writer and activist, involved a social reform movement opposed to caste and sectarian divisions.

Jibanananda was hit by a tramcar and died from his injuries.

Many feel it was a suicidal act and his patchy career as a college tutor and an unhappy personal life contributed to a life of melancholy and he was sensitive and death had a certain allure for him – Kaysher feels.

“He always wanted to plant a kiss on the lips of death and that’s what he did.

“He was a poet who understood the complexities and ambiguities of existence and the turmoil of the human mind” said Kaysher.

It will be a night of celebration in word, song and dance.

There will be new musical compositions with Jibanananda-inspired lyrics and spoken word celebrating the poet’s work with many versatile artists from different traditions.

There will also be dances as visual representations of the poetry he gave birth to – and Kaysher says anyone who has seen Ingmar Bergman’s film, ‘The Seventh Seal’ (1957) which is widely regarded as one of the most profound works of art, interrogating life and death, will be able to appreciate the poetry Jibanananda created.

“I would be so happy if they could know and meet each other,” Kaysher reflected.

Privacy & Cookies: This site uses cookies. By continuing to use this website, you agree to their use.
To find out more, including how to control cookies, see here: Cookie Policy
← ‘Combustion’ – final chance to see new play that has got everyone talking…
London Indian Film Festival (LIFF) opening gala red carpet video – coming – Lagaan director at BFI for first time today →