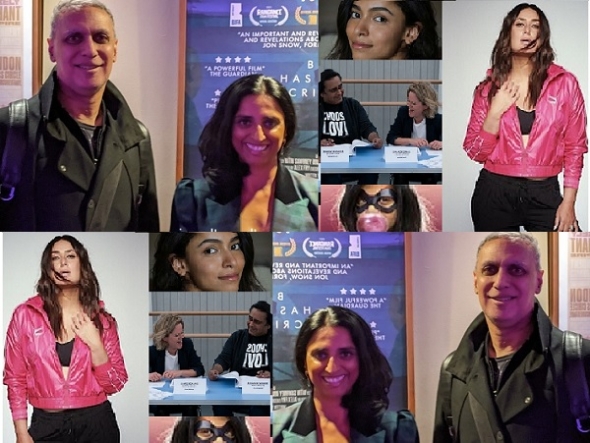 ‘Hostile’ – film about how our government views immigrants

POWERFUL and revealing Sonita Gale’s debut film as a director, ‘Hostile’, is well worth catching – especially if you are interested in the way that UK governments have dealt with the subject of immigration.
Gale, who first entered the film industry as a producer and somewhat later into life after a career in recruitment, takes the 2012 Government’s stated aim of being ‘hostile’ towards anyone trying to settle in the UK (without indefinite leave to remain or EU status at the time), as her starting point.
Wide-ranging – with interviews with an array of people who are incredibly likeable but are unable to settle here, as well as academics and experts who provide critical analysis – the film was shot during the pandemic and covers a huge range of ground, including Windrush and community responses to the pandemic, and how some organisations came to the aid of foreign students who were left practically destitute because they had ‘No Recourse to Public Funds’ (NRPF) – a recurring theme that comes up again and again in the film. There is one unintended comic scene where Prime Minister Boris Johnson simply doesn’t know what MP Stephen Timms is talking about when he raises the plight of foreign students and NRPF during a Zoom meeting in the pandemic.
Gale and executive producer Nitin Sawhney, whose music can be heard on parts of ‘Hostile’ were both at a post Q&A screening on Tuesday (March 15) at the BFI Southbank as their film brought the curtain down on The Camera is Ours – Britain’s Women Documentary Makers which played there from early March.
Gale herself is on something of a campaign now with screenings up and down the country.
She told www.asianculturevulture.com: “The stories in the film, which we completed filming last year, are still not resolved. The participants continue to have to jump through hoops designed to keep them from settling here. In addition, you see it in our government’s instinctive reaction when it comes to situations like the one we are seeing with Ukrainian refugees, and how the UK has been dragging its feet in creating a welcoming sanctuary for those fleeing war.”

We will have a fuller report and more from Gale and Sawhney on the film soon. https://www.hostiledocumentary.com/
A BFI DVD/Blue Ray release from The Camera is Ours – Britain’s Women Documentary Makers will be available from March 29. Check BFI Shop.

RIZ AHMED and US organisation Pillars have just announced their inaugural 10 Artists Fellowships.
These Pillar Artist Fellowships – which are also supported by Ahmed’s company, Left Handed Films – are part of a new scheme that is trying to improve and redress Muslim representation in Hollywood and other creative parts of the film and TV industries.
A study by USC Annenberg Inclusion Initiative found that Muslim representation in Hollywood was either low to non-existent, often negative and simply contributed towards discrimination and prejudice and did little to tackle ignorance or further understanding of diverse Muslim communities.
These Fellowships aim to redress the imbalance and “shift the lens through which our stories are told to one that is complex, accurate and honest,” says Pillars.
Each fellow as well as receiving $25,000 will get mentorship and guidance from industry experts and have access to an advisory committee of award-winning Muslim actors, directors and producers and writers – with Ahmed being among them. These year-long Fellowships are also sponsored by Netflix and Amazon Studios.
The inaugural 2022 Pillars Artists Fellows are: Fateme Ahmadi (director UK); Zeshawn Ali (director, US); Aqsa Altaf (director, US); Nausheen Dadabhoy (director, US); Imran J Khan (director, US); Karim Khan, (writer, UK) Myriam Raja (director UK); Nadra Widatalla (writer, US); Farida Zahran (director, US); and Ali Imran Zaidi (writer, US).
Ahmed and Allie Moore, who runs Left-Handed Films, said: “The talent is out there. Through the Pillars Artists Fellowship, they will be supported in creating freely, navigating industry barriers, and building a community of peers and allies.
“We’re thrilled to see how their work will grow with the creative support and financial resources granted by the Fellowship, and the generosity of our sponsors, advisory board members and creative allies.”
One of these Fellows is Aqsa Altaf who spoke to acv about her Disney short, ‘American Eid’. You can watch it here.
To see more about the individual winners and more about the initiative, go here https://pillarsfund.org/culture-change/pillars-artist-fellowship/
https://pillarsfund.org/2022/03/15/pillars-fund-riz-ahmed-and-left-handed-films-announce-inaugural-cohort-of-pillars-artist-fellows/

HAVE you met teenager Kamala Khan yet?
She’s the first Muslim superhero as conceived by Disney Plus and Marvel Studios and you can see her now in the trailer that dropped earlier this week.
Titled, ‘Ms Marvel’, Khan is a Pakistani American navigating her way through school when she discovers she has some very cool superpowers.
The trailer looks at how Kamala balances school life, her family as well as her aspiration to one day join the superheroes she idolises.
First introduced into the comics in 2013, Kamala is obsessed with Carol Danvers, better known as Captain Marvel, with actor Iman Vellani making her onscreen debut in the titular role.
Brit Bisha K Ali is the lead writer on the series that is scheduled to drop on June 8 on Disney + channels worldwide. Ali previously worked on Mindy Kaling’s diverse take on ‘Four Weddings and a Funeral’ (2019) and has a background in comedy and screenwriting.
Other cast members include Aramis Knight as Kareem, Saagar Shaikh as Aamir Kamala’s older brother, Rish Shah as Kamran, Zenobia Shroff as Kamala’s mother Muneeba Khan and Mohan Kapur as Yusuf, Kamala’s father.
Vellani will reprise her role in the ‘The Marvels’ in 2023, a sequel to the film ‘Captain Marvel’ (2019). Trailer here.

FANS of the hit ITV crime detective series finally know who is going to play opposite Sanjeev Bhaskar as DC Sunny Khan in the next series of ‘Unforgotten’.
Bhaskar himself took to Twitter to reveal to his followers that Sinéad Keenan will play DCI Jessica James.
He tweeted: “Direct from @ChrisLangWriter’s talented digits well done to the small number that guessed someone I’ve admired (And briefly worked with) for ages, the gorg @SineadKeenan. So many great guesses but lucky me, I get to work with this one.”
Bhaskar’s character Khan was left devastated by the loss of DCI Cassie Stuart (Nicola Walker) in a car crash at the end of Series Four, leaving fans in tears.
Keenan reacted on Twitter: “Well, now. There’s a few more of you here than there were this morning. And aren’t you all just lovely?! @ChrisLangWriter has let it be known that #Unforgotten & @TVSanjeev are lumped with me now for the next few months and I for one am delighted! X”.
Keenan who has a Bafta nomination for her role in ‘Little Boy Blue’ also told ITV: “I’m hoping that if I play my cards right I might even get to take a peek in Sunny’s backpack.”
Something of a long running joke in the series, Khan hardly goes anywhere without his backpack.
The new series is currently being filmed and is expected to pick up where Series Four left off with DCI Walker’s sad demise. The drama, written by iconic TV screenwriter Chris Lang, involves detectives investigating murders that have gone cold – unresolved for many years. Starting in 2015, it has gone onto build huge audiences and it’s thought the last nail-biting episodes when it revealed that Walker had died clocked up near to 10 million viewers.
There is no firm date on a release yet – but ITV expect to broadcast it before the end of this year. Follow Unforgotten (Twitter)

BOLLYWOOD star Kareena Kapoor Khan has been cast as the lead in Netflix’s Indian adaptation of Japanese author Higashino Keigo’s bestselling novel ‘The Devotion of Suspect X’, which will be directed by ‘Kahaani’ filmmaker Sujoy Ghosh.
This will be Kapoor Khan’s streaming debut, with other cast member including Jaideep Ahlawat, and Vijay Varma. The book follows a mother and daughter duo who commit a crime and a neighbour who helps them cover it up when the police come knocking.
Kapoor Khan posted on Instagram about the yet-to-be-titled film: “And so it begins… 12th Street Entertainment & Northern Lights Films in association with Boundscript and Kross Pictures present a Netflix Original directed by Sujoy Ghosh.”
Production has just begun and as yet there is no date as to when it will drop.
Kareena Kapoor Khan – https://www.instagram.com/p/CbJfN-kKhFC/