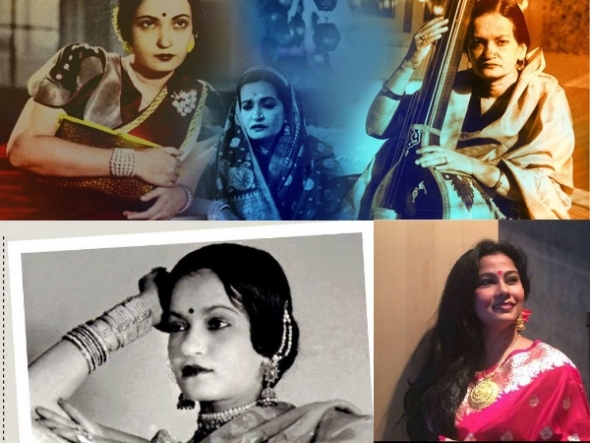 SHE WAS A HUGE STAR in her day, as a singer and actress, and had a very dramatic life – and now an established British-based singer is not just bringing Begum Akhtar to life on stage, but reprising many of her most popular songs.

Akhtar was most famous for her Ghazals – a form of poetry in song, often about love, separation and longing – and was known in later life as the ‘Mallika-e-Ghazal’, the ‘Queen of Ghazals’.

Her voice and its mellifluous quality charmed millions and she was among the earliest female recording artists, and died in 1974, aged 60; she also appeared in many films and sung in them too, spreading her fame far and wide.

She grew up in Lucknow but later spent much time in Kolkata too – and had two significant ‘relationships’ that both defined – and marred her career, said London-based Chakraborty.

As her vocalist herself, she has a couple of albums to her name and has performed widely across India, UK, including at the Southbank Centre – and even in Lahore, Pakistan. She is an artist herself of international repute and has written the play to accompany the music.

She found Akhtar’s story inspiring and wanted others to appreciate the pain and struggle the icon had, as an artist and as a woman of her time.

“It was her perseverance that attracted me to her. She was very famous, but most people only see that side – they do not appreciate what it takes.

“Being a vocalist myself, there are a lot of obstacles we have to overcome – and at that time, Begum Akhtar would have had far more than we do today – it was a very patriarchal society.

“She had a very dramatic life,” Chakraborty narrated.

She has delved deep into Akhtar’s life, reading and researching as much she could and found that some things about her early life were hidden and obscured – for good reason, she believes.

Chakraborty said Akhtar was beautiful and found herself at the mercy of a local Maharajah who fathered a child with her – at just 13.

“She had to pass her daughter off her as her sister – she was molested by the Maharajah, but she put that behind her and started performing everywhere in India and became very famous, especially for her ghazals,” continued Chakraborty.

Akhtar’s film career took off in the 1930s and she sung in all of them. In 1942 ‘Roti’ was released, made by the legendary Mehboob Khan (‘Mother India’), with music by Anil Biswas, another iconic figure in early Indian cinema.

In 1945, Akhtar married a barrister, Ishtiaq Ahmed Abbasi, but he forbade her to sing or perform in public.

For nearly five years, she did not perform publicly and it was widely acknowledged that Akhtar was severely depressed and unhappy – only emerging from the darkness, when she started to do concerts again.

“She started to drink and smoke heavily (during the absence)” Chakraborty asserted. “It was the pain of not performing – and her marriage broke down.”

Her career, though, picked up afterwards and she continued to perform and record. She was recognised posthumously by the Indian government and conferred with the Sangeet Natak Akademi Award for vocal music and it was presented to her by India’s National Academy of Music, Dance and Drama. In 2017, Google even had a doodle of her.

“It got a standing ovation and people there wanted to hear Ghazals.”

In September, Chakraborty presented a short teaser of the current show at Rich Mix in London.

“It was a taster for people to see and it went down very well, people loved it,” Chakraborty recounted.

The show itself is about 90 minutes and contains live music and Chakraborty will be joined by 13 other characters on stage. The show is being mounted by Chakraborty’s own outfit, Kalakar, in its first ever production with many of her singing students contributing as characters.

Chakraborty is perhaps best known to acv readers for her work and support of Saudha, Society of Poetry and Indian music (see below), and which helped her to produce the teaser last year. She is the co-founder and artistic director and works closely with fellow co-founder and director, Ahmed Kaysher.