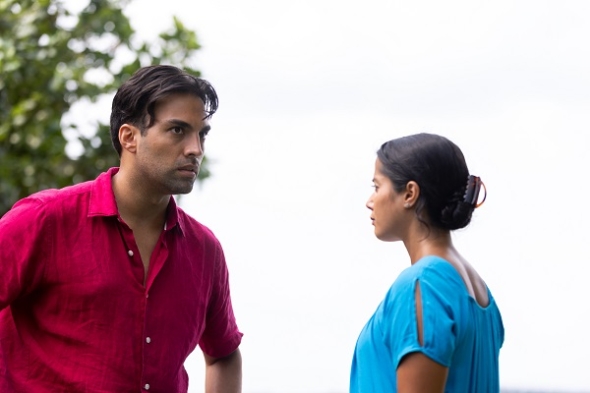 The medic who broke Dr Ruby Walker’s (Amrita Acharia) heart is back and exuding both his charm and vulnerability, says the actor who plays him…

FANS of the primetime TV series ‘The Good Karma Hospital’ welcomed back a familiar but mysterious character who has been mostly absent this time around in Series 4.

Dr Gabriel Varma, played by the popular James Krishna Floyd, appeared in episode 4 last week (Sunday, February 13) and features more prominently in Sunday’s forthcoming fifth instalment of ‘The Good Karma Hospital’ as we reach the final episode of this series on Sunday, February 27.

Dr Varma and Ruby Walker (Amrita Acharia) had been involved and their would they/wouldn’t they romance finally took off – but ended somewhat abruptly as Dr Varma resigned from the Good Karma Hospital, just leaving a note and Ruby with a broken heart. In epsiode three, she left to comfort her ill father.

Krishna Floyd, who has a mixed race background of English and Tamilian South Indian, told www.asianculturevulture.com: “It was touch and go as to whether I was going to return, but for a variety of reasons I think it was the right thing to do.

“To be honest, more than anything, I just think creatively that was the best way to go. I think it would have been a bit too much of an abrupt cliff hanger if he didn’t come back for this series”.

Not everyone was pleased to see him – Nurse Mari Rodriquez (Nimmi Harasgama), another long-running character, punched him – showing her disgust at the way he had resigned and left Ruby without saying very much or anything at all.

Krishna Floyd suspects Dr Varma is a bit out of his depth and struggling to express his real feelings.

“If you watched the last episode, I think that because he doesn’t allow his instincts and his heart to guide him, when someone does actually mean something to him, like Ruby does clearly, his instincts just suddenly take over,” explained Krishna Floyd.

He said currently Dr Varma is just being guided by his emotions and little else.

“I think the mystery and unravelling of someone like Gabriel makes sense to who he is, so it’s quite difficult to say concretely what he’s feeling.

“I think generally right now, he’s acting on instinct alone, which is a wonderful thing and it makes you feel very good in the moment, but it also gets you in trouble, there’s no reason or logic to it.”

Speaking of Gabriel’s sudden exit, Krishna Floyd admits that Gabriel is terrified and vulnerable and speculates as to whether he is the type of character seemingly only destined for short term relationships.

He told acv: “Any vulnerability and any opening to his heart terrifies him. There is something wonderfully incomplete about Gabriel, and I hope that comes across and people can relate to that as well, we’re just human beings who are just as confused as each other. I think people like him are destined to a lot of short- term relationships.

“But I don’t know if the way he approaches his relationships, especially with Ruby, are particularly healthy, but I think he is learning, and one thing I’ve tried to do over the show is to make him evolve as the show goes on.”

Krishna Floyd enjoyed returning to the series and has built an affinity for the people in and around the area in Sri Lanka where the series is shot – though the setting for the drama is the state of Kerala in South India.

“It was like trying on some old gloves that still fit”, the actor said of his reprising the role of Gabriel. “I think once you’re in a series that is already quite popular and has a loyal audience, generally speaking things become a lot more relaxed on set, and there’s not so much pressure.”

The actor expressed his sadness for the Sri Lankan community during the pandemic, but added, nevertheless, “it was nice to see Sri Lanka again and I’ve got a lot of local friends now who have become very close to me.”

It will be interesting to see if he’s going to be a regular character again – but there’s no word on a Series 5 yet.

Krishna Floyd’s focusing on other roles and a film he’s written – but he couldn’t say any more.

His return in this series will have some very much hoping he’s back for good! Not least maybe Ruby…

Privacy & Cookies: This site uses cookies. By continuing to use this website, you agree to their use.
To find out more, including how to control cookies, see here: Cookie Policy
← Britain We Exist to launch tomorrow (August 30) and show contributions of South Asian LGBTQi communities to national conversations…
‘A Suitable Boy’ – “The Crown made brown” quips filmmaker Mira Nair on her first TV project… →