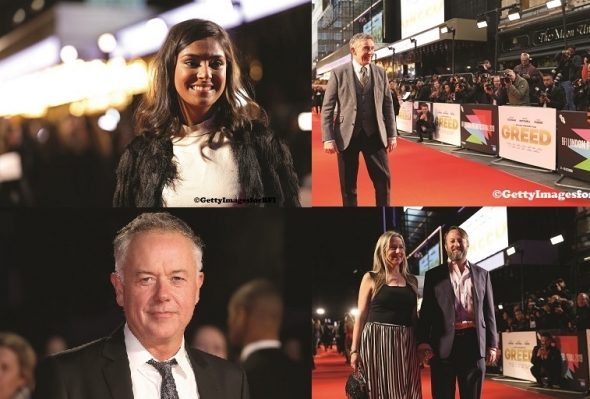 Greed – Fun and frothy but bite is soft, chewy… (review)

FOR THE FIRST 30 minutes or so watching the story of ‘Richard McCreadie’ (Greedy McCreadie) is quite amusing and enjoyable – but you don’t really care for this tycoon who thinks nothing of screwing workers in the developing world out of a few pennies.

He has no conscience – all he cares about is the deal and making money and lots and lots of it.

The film then centres around McCreadie’s wish to throw an extravagant and very OTT party for his 60th birthday. The party is set for Mykonos in Greece and McCreadie wants an amphitheatre and to recreate the set of ‘The Gladiator’ – he loves that film.

The backdrop and backstory to all this is just how he made his money and we see his journey through London and then the developing world where prices to make clothes are less than half of what they are in the West.

The scenes in Sri Lanka are quite affecting – at one point McCreadie argues with a rickshaw driver over just 200 Sri Lankan Rupees (back in the 1980s). He doesn’t care for the scene he creates and retreats to his hotel amid the kerfuffle.

Director Michael Winterbottom has shot many films in the subcontinent (Dev Patel’s The Wedding Guest being just one of the more recent) and shows a sympathy with workers in the developing world and how they are being used to fund first world excesses and exploitation. At the very bottom of the value chain – they aren’t worth much.

Hold this because as the film progresses it becomes a more significant theme.In fact, it’s a shame it comes up so late into the film – almost an hour or so into it, possibly even later.

It becomes apparent that the Dinita Gohil character has a connection to the garment workers and a significant plot element plays out through her.

It’s probably the strongest part of the film and gives the film more of its political edge.

Beyond this, it’s a very enjoyable cinematic romp of sorts – McCreadie is a little cartoonish, but then anyone who has followed the antics of clothing retail tycoon Sir Philip Green might disagree.

Coogan is in his element as McCreadie – though you do think it’s all a bit too easy for him as an actor. On the other hand, you wonder just how much of a performance it is for David Mitchell. He plays the commissioned biographer and interviews many people from McCreadie’s early life – including his mother played with great aplomb by Shirley Henderson. If you’ve not met a tough-taking non-nonsense Irish woman, this is her.

Mitchell’s character is someone clearly with a conscience and he is uneasy with all the wealth and its trappings that come with the McCreadie lifestyle.

Increasingly, he feels a sense of distance and dislocation and again it is an important part of the plot twists – if we can put it like that.

Asim Chaudhry plays the lion tamer – one has been brought into tickle the guests (not quite literally but not far off).

It’s an entertaining film and much fun, and its heart is very much in the right place, but whether anyone will take the fight to mindless fashionistas seems doubtful… (as the end credits roll, we get the figures about just how much the fashion industry is worth and wages in developing countries).