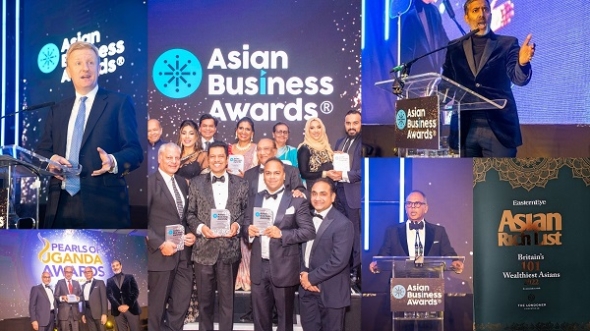 A highlight of the business calendar, Asian success stories stress legacy and community…

IT IS A GLITTERING night and not just because of the wealth of some of the guests.

Eastern Eye’s Asian Business Awards is probably the most significant and high profile gathering of rich South Asians – at least anywhere between New York and Mumbai.

This year’s 24th Asian Business Awards, held at the Park Plaza at Westminster Bridge in London, on Wednesday (November 23) and hosted by the Asian Media Group, garlanded entrepreneur Sri Prakash Lohia (second row far left in the picture below) and his business, Indorama with the top award on the evening – the most coveted title, Asian Business of the Year.

This year, also, to mark the 50th anniversary of the expulsion of South Asians from Uganda – there was a section devoted to celebrating members of that particular community with a Pearls of Uganda Awards (see below for full list, please).

BBC broadcaster Nihal Arthanayake was the compere and moderated two discussion segments as well – the first with the Pankhania family, who run property development group, Westcombe and then with prominent British Ugandan Asian figures, Dr Nik Kotecha, Ambassador Mumtaz Kassam and Malik Karim talking about how they came to Britain as refugees and rebuilt their lives here.

The 600 or so guests also at the dinner heard keynote addresses from senior Cabinet member and Duchy of Lancaster officeholder Oliver Dowden CBE and Mayor of London Sadiq Khan.

Both praised Asian businesses for their contribution to national wealth and capital wealth respectively.

The evening also saw the first release of ‘The Asian Rich List’, the country’s most detailed and authoritative guide to wealth held by South Asian individuals and families in Britain. Khan helped to launch the latest edition with Kalpesh and Shailesh Solanki, group managing editor, and executive editor, respectively.

Topping the list again for another year is the Hinduja family – their combined wealth is valued at £30.5bn. Among their prized possessions and one that will be open to the public very shortly – next year – is the Old War Office (OWO).

This grade II listed building is situated at the top of The Mall, which leads down to Buckingham Palace from Trafalgar Square. It is packed with history and was the place, quite literally, where Prime Minister Winston Churchill planned and plotted The Allies every and ultimately, successful move during World War II. Purchased for £350 million, it is being converted into a plush hotel and will be run as a Raffles Hotel & Resorts, by the French hospitality giants, Accor.

Gopi Hinduja, the 82-year-old patriarch, tells ‘The Asian Rich List’s‘ Amit Roy, all about the much prized project and says it is not so much about the money to be made or how much the cost of refurbishment will set his family back – but states that it is a “trophy project” and motivated by wanting to leave a legacy of “opulence as well as thoughtfulness” and an establishment of tranquility and peace amongst one of the busiest parts of London. He says he wants the hotel to be among the top five in the world and that the project has given the family a passion for other heritage products.

The family have been caught up in a dispute over assets and authority – the patriarch Srichand is 86 and has been suffering ill health for a time. A recent London court ruling has ensured a temporary truce. See here https://www.reuters.com/world/uk/indias-billionaire-hinduja-family-agrees-truce-legal-battle-2022-11-11/)

The combined wealth of the 101 Asians listed in the publication stands at £113.2 billion – and is an increase of £13.5bn on last year.

There are 16 British-based billionaires on the list – one up on last year.

Among the very highest increases of wealth this year are Sri Prakash Lohia and his company, Indorama.

At no. 3 in the list (and separated only by steel magnate Lakshmi Mittal and family) SP – as is he is commonly known – has a fortune of £8.8bn and this has gone up by £4bn this year after he went on something of spending spree, acquiring firms in different parts of the globe. The Lohias and Mittals are also family – SP is married to Lakshmi’s younger sister, Seema. They come from the same Marwari community who can trace their roots back to Eastern Rajasthan in North India.

Essentially a plastics manufacturing business, with interests in textiles still, Indorama is well aware of its carbon footprint and is adapting to the environmental challenges of the century.

Dowden joked about his first job being in a warehouse owned by an Asian businessman and emphasised how much the country had gained from Asian entrepreneurship and joked that his boss was also part of a community that valued wealth creation and business activity.

“And of course, in my latest job, I have a British Asian boss, my very good friend Mr Rishi Sunak, the United Kingdom’s first ever British Asian Prime Minister.”

Kalpesh Solanki, Asian Media Group managing editorF, in his keynote welcome address praised the versatility and resilience of Asian business and pointed out that despite the challenges of a post covid world, the cost of living crisis, and the war in Ukraine, Asian business activity remained solid and broadly forward-looking and expansionist.

Shailesh Solanki added: “This year’s Asian Rich list has once again demonstrated the positive financial impact British Asians have in the UK and the level of success and growth that certain entrepreneurs and business leaders have achieved, despite the challenging conditions on the economy.”

Businesswoman of the Year – Prema Subaskaran founder Lyca Healthcare
Built brand from scratch and now has headquarters in Canary Wharf , operates in India and last year took over an entire hospital in Kent.

Philanthropy Award – Koolesh Shah, founder and chairman of London Town Group of Companies and Koolesh Shah Family Foundation (bottom second left)
A Jain by background who started in textiles and then hotels, Shah’s Family Foundation has been involved in a huge number of charity projects and Koolesh himself is chairman of the Sri Aurobindo Trust, dedicated to spreading the ideals of the great Indian intellectual of the last century Sri Aurobindo.

Charitable Foundation of the Year – Bestway
Instrumental in responding to the tragedy of the floods in Pakistan this summer. Raised millions in days and has provided direct relief to thousands of families affected. Bestway is a British-Pakistani multi-national conglomerate with interests in wholesale, pharmacy and banking and cement in Pakistan and was created by Sir Anwar Pervez, 87.

Entrepreneur of the Year – Vijay Patel, CBE chairman of Waymade Capital
Vijay and brother Bhikhu Patel have built several pharmacy businesses and have sold them on and now have a wide investment portfolio and they continue to run companies in the pharmacy sector.

Deal of the Year – Salim Janmohamedm managing director of Kairali Group
One of Britain’s most successful franchise fast food restaurant owners, he recently sold his stake in 74 Burger King units.

Young Entrepreneur of the Year – Shahleeza Hasham, head of hospitality, communications and commission CHD Living
Operating in the care sector, Hasham came up with the idea of Adopting a Grandparent bringing young people and those in care homes together for the first time and sparking a worldwide move for more intergenerational activity.

Family Business of the Year – The Pankhania family (Kamal & Sunil Pankhania, bottom right and centre)
Starting with just a single house in South London, they have gone onto becoming one of the country’s leading developers and specialise in project others rarely touch because of planning conditions and other hard to meet building spefications – often renovating and redeveloping Grade II listed properties

Franchise Business of the Year Aly Janmohamed of Soul Foods Group
Starting with just a single KFC restaurant Janmohamed built a franchise empire compromising more than 380 across the fast food sector and expanded to Canada as well.

Healthcare business of the year – Ruh Dental
CEO Zayba Sheikh has created a brand from scratch and one that is known for its high standard of care, facilities and aftercare in the dental cosmetic sector.

Privacy & Cookies: This site uses cookies. By continuing to use this website, you agree to their use.
To find out more, including how to control cookies, see here: Cookie Policy
← Sanya Malhotra on her role in ‘Shakuntala Devi’ biopic video interview and pictures… (Amazon Prime Friday, July 31)
AR Rahman – Hitting the high notes with ‘Dil Bechara’ album for Bollywood film →