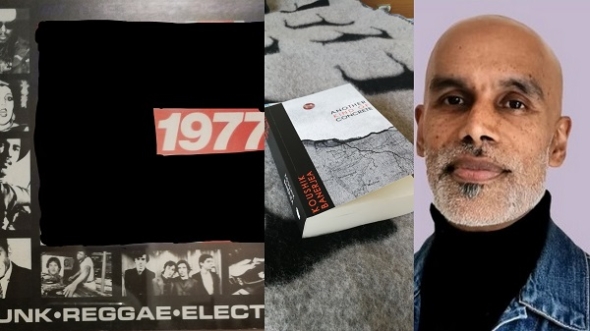 THERE are deep political divisions, unemployment is rising, and some communities are not getting along too well.

It is 1977 and the fissures are, probably, deeper and darker – racists roam the streets of London looking for Asians to casually beat up, a political party – the National Front (NF) is rising in the polls and its central aim is to forcibly expel anyone of colour from the UK.

Koushik Banerjea’s debut novel dives straight into this social and political maelstrom with the Battle of Lewisham on August 13 1977. It is what many commentators will define as a seminal moment in community relations and street politics.

The NF march has kicked off big time – in the colloquial sense – and there are running battles between the racists, police and some ordinary Asian and Black folk trying to go about their everyday business in that part of South London and not be intimidated – or attacked.

Our early narrator ‘K’, a schoolboy of imprecise age (possibly nine or 10), knows his bus routes and manages to evade the troubles and has his very own 3 Rs: “Routemasters, reading, and rioting”.

We are very vividly and powerfully now in the world of ‘Another Kind of Concrete’.

It’s a novel about a time that has not been much written about from a British Asian perspective in fiction.

It was a period of turbulence and social change, but Asian and Black people were rarely acknowledged, let alone heard – except as some form of ‘problem’ – especially in the mass media.

At a simple level, ‘Another Kind of Concrete’ is about a family trying to establish themselves in a new environment.

The title too is revealing, but you will need to read the book to understand and then possibly appreciate it fully.

“The other three-word description is Partition, Polyester, and Punk,” Banerjea chuckled to www.asianculturevulture.com.

“It’s a story about us, people like us, like freshly laid cement, you’re not quite sure how the pattern will dry out and what the template will be.

“That’s why there’s an old map of undivided India and a cracked slab of concrete, to re-enact the suture of Partition – there is that going on, and it plays with the idea of solidity as a form.”

There is also a cricket ball – and it’s clear Banerjea has a deep affection for the game and writes lovingly and insightfully about the West Indies’ domination during this time.

The one-time BBC journalist, youth worker and academic – his last post was lecturing at the LSE on Post-Colonial Theory has been writing a while – has had short form fiction published before embarking on this novel. It is published by Jacaranda, an award-winning publisher* which has a number of British authors of colour under its banner.

This title came about on an unplanned, rumbunctious night out (as Banerjea recounts it) at The Southbank with a friend, who remarked about the grey buildings and steps by the Hayward Gallery: “‘It’s another kind of concrete’”.

Banerjea elaborated: “It stayed with me and it’s an interesting phrase and I thought about it some more.”

And probably some more – nothing is very permanent, it’s not meant to be, he explained.

“It’s in the novel and for anyone who pays attention to the details, it’s there in the cover and hopefully, it percolates into the words that follow.”

‘K’ isn’t the only narrator – the mother character’s voice is tender and poignant, while K’s is more on the edge – funny, a bit of a geezer, ducking and diving and school is mostly about survival, playing footie and watching cricket and generally side-stepping the ‘runts’ (many of his classmates) and their sort of trouble – though that is not always possible.

The tension of the 1970s, the tribalism of that period and the oppressive atmosphere of racism hanging heavy on the street and beyond, is both the fuel and crackle that ignites fires – some good, but a few ugly.

“There are quite substantive sections that deal with Pre and Post Partition India and Bengal from the 1900s to Partition,” Banerjea explained. “It plays with the time frame, it’s not a linear story, it’s essentially a modernist tale.”

Different chapters and sections deal with each narrators’ story – the father character is the one steeped in Partition and its scars.

Partition in British-based fiction is rare – in fact, it is almost completely absent.

In 2017, both India and the UK marked 70 years of Independence; Partition and its attendant issues did begin to spill into the public domain after the long, relative silence.

Banerjea’s own examination is around the Partition of Bengal – into East and West. Initially, there was a Partition in 1905 when the province was divided into two for administrative reasons by the British colonial power.

Then with the Partition of India in 1947, East Bengal became East Pakistan and part of Pakistan, a new country, as it too contained a Muslim majority population area.

Many Hindus fled to West Bengal and Muslims went in the other direction. East Pakistan became Bangladesh in 1971 – following the Liberation conflict and war between Pakistan and India.

“Partition is not generally spoken about because it’s mass and widespread trauma and on a scale most people cannot even contemplate (as many as a million died, and 15 million were displaced according to estimates) and that in turn produces Post Traumatic Stress Disorder and silence is one of its many indices.”

His novel is dedicated to his mother, but it is his late father and perhaps his experience of Partition that has the wider frame of reference.

This novel is a beautiful elegy to him and his world, the good, the bad and the ugly.

Banerjea Senior came to London 1952 and lived in Ladbroke Grove in West London initially, and did all manner of jobs, from working in a factory to being a hospital porter later, and raising Koushik and his brother.

While Koushik may owe much to his mother for insisting he could write and spell and read widely from a very early age, the shadow of his father’s experience, is also deeply woven into the fabric of this rich, expansive, emotional tale.

When we discussed the title, Banerjea told acv: “I had just taken my father’s ashes back (2013) to the old country.

“These are never easy moments – he had a tough life in all kinds of ways, but he was a great bloke, open-hearted and hugely talented – and part of that was in the way he lived, without bitterness and with generosity.

“He was not recognised for his talents (he also sculpted in his spare time). He didn’t spend time being bitter.

“After the observation of a ritual by the Ganges, I felt I owed him something more, I owed him a story of some sort.”

Then, you’ll know why Banerjea Senior’s talent for life – in the way that his son has described it – was hardly ‘squandered’. Far from it.

*Jacaranda were named Small Publisher of the Year in The British Book Awards 2020 (organised by the trade publication, The Bookseller).

Another Kind of ConcreteJacarandaKoushik Banerjea