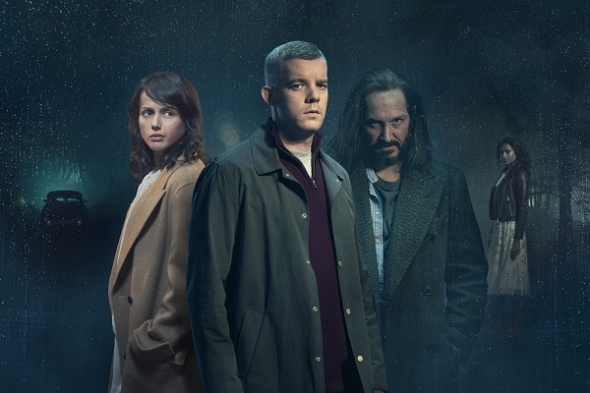 Alongside star Russell Tovey (‘Being Human’), she plays his girlfriend/wife, ‘Holly Fox’ in what is a murder mystery and begins with a missing woman appeal by Acharia’s character.

It is her sister that has gone missing after a New Year’s Eve Party – and in the opening, we see ‘Nathan’ (Tovey) watching the televised police investigation appeal some years earlier.

What does he know about her sister’s disappearance and how do they come to be a couple some years later? How did he know her sister before befriending Holly…intrigued?

Written by BBC ‘Luther’ creator, Neil Cross, the first episode is particularly gripping – and suspenseful, especially now as the nights draw in the UK after the clocks went back over the weekend. Cross adapted his own novel, ‘The Burial‘ (2009) and it is based on a particularly vivid dream of stabbing a tramp in a wooded area and waking up in cold sweats thinking it was real.

It is spooky and Bob Morrow (Bertie Carvel), as a sort of mystic investigator, is excellent and Carvel does get in the way of Tovey and Acharia enjoying a harmonious life together as a young married couple with the world at their feet.

Acharia has been promoting the drama and was on Channel 4’s ‘The Brunch’ yesterday talking about her role. (See below).

There isn’t any strong ethnic component – though Acharia told ITV press the character is mixed race like herself – she is herself of Nepali and Ukrainian heritage.

“I felt is was such an amazing choice and so timely of the production to choose Holly to be of mixed race and make that completely incidental. Along with Elise (her sister in the drama).

“It goes to show it is completely possible to do more of that – and that it absolutely works. You do not have to explain it and it doesn’t have to be a big thing about race or identity. It can just be an incidental thing and the story can belong to everybody.”

Acharia also told ITV that she was partly inspired to create her own podcast series, following conversations with ‘The Sister’ co-star Tovey.

She created Rule not the Exception podcast with Sagar Radia, who also features alongside her in another prime time ITV drama, ‘The Good Karma Hospital’ (Season 3 aired earlier this year in the UK). The podcast has interviews with people who have broken through barriers, hence being the rule, not the exception (as normally portrayed)…

“If it wasn’t for Russell, I wouldn’t have started it. Because he’s got his own amazing ‘Talk Art’ podcast which does really well.”

Acharia is one of the lead characters in another prime-time ITV drama, ‘The Good Karma Hospital’ which is about a community hospital, set in Kerala, South India and Acharia plays a British Asian medic tending to the locals there.

Acharia and Sagar have just launched Series 2 and among the recent guests (October 26) are actor Anjli Mohindra. Season 1 closed with with well-known writer Nikesh Shukla, and was done remotely as the national spring lockdown came into force.

Listing
‘The Sister’ airs over four consecutive nights from this evening (October 26) – 9-10pm or catch on ITV hub (UK only). ‘The Sister’ will air in the US on Hulu.

To view (on desktops & tablets) click on picture and use arrows < > by moving cursor to the middle; to close picture, click x on top right; to close gallery, click outside the picture frame…
For caption only, hover cursor over picture. For mobiles, click on pictures to enlarge and read caption and flick through as above…😉

Privacy & Cookies: This site uses cookies. By continuing to use this website, you agree to their use.
To find out more, including how to control cookies, see here: Cookie Policy
← Sunny and Shay and baby Tyra on ‘One Born Every Minute’ – Star is born….(literally!)
‘The Good Karma Hospital’ – Sunday tears, romance (?) and Kerala sunshine with Amrita Acharia and James Krishna Floyd… →